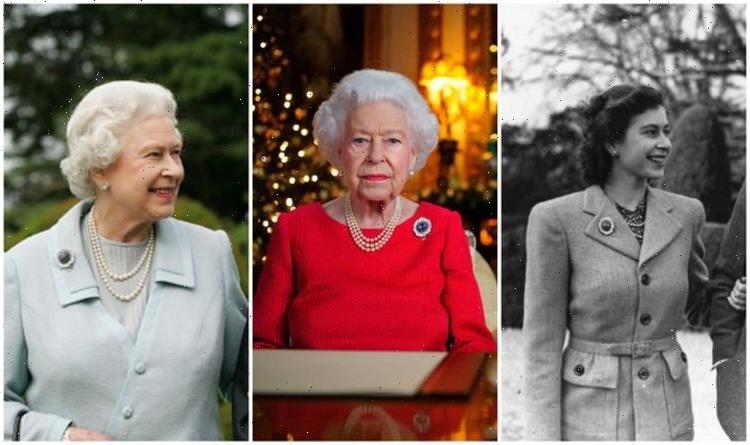 The brooch has been in the Queen’s collection for decades.

It is a rare piece that dates from before her wedding in 1947.

She received it in 1946 when she launched an oil tanker, appropriately named the British Princess.

Eddie LeVian, CEO of American jewellery house Le Vian, whose 18th-century ancestors guarded the royal jewels of Persia including the Koh-i-Noor diamond, now part of the British Crown Jewels, spoke exclusively to Express.co.uk about the Queen’s choice in brooch and why it was significant.

He said: “The Queen’s sapphire and diamond chrysanthemum brooch is one of the Queen’s favourites.

“Deep blue sapphires form the centre of the flower and diamonds represent the petals.

“Given this is the brooch that the Queen famously wore in her honeymoon pictures in 1947, it evokes strong memories of her 73-year marriage with Prince Phillip.

“Also, the fact this is sadly the Queen’s first Christmas without him.

“Sapphires are rare, durable and eye-catching.

“In ancient times, they were associated with gods and goddesses like Venus and Apollo.

“Also in ancient Greece, sapphires were worn while consulting oracles.

“Sapphires have long been associated with royalty because they are believed to protect from envy and attract wealth.”

Royal fans shared their love for the Queen’s brooch on social media.

Another called @maiseelspeth223 added: “So happy she had love in her life from a doting husband for so many years.”

Today’s Queen’s speech will depict the Queen sitting in her White Drawing Room in Windsor Castle at her desk with one single photograph.

This photograph will show the Queen and Prince Philip together celebrating their 60th wedding anniversary back in 2007.

In the picture, Queen Elizabeth is wearing the same brooch she is wearing for today’s Christmas speech.

This is most likely to show how much she loves and misses her husband of 73 years who died this April.

There are pictures of the Queen wearing this exact same brooch in the same pose back on her honeymoon in 1947.

The Queen’s Speech will air today at 3pm in the UK recorded from Windsor Castle.

Can you solve these tricky Christmas brain teasers?
Entertainment