A MUM has been accused of sexually abusing her children for practicing extended breastfeeding for more than five years.

Gaëlle Meheut, 36, from Port-Vila, Vanuatu, was breastfed until she was three-months-old and when she fell pregnant with her first child, Ewen, 5, she didn’t have any plans to breastfeed him for an extended period of time. 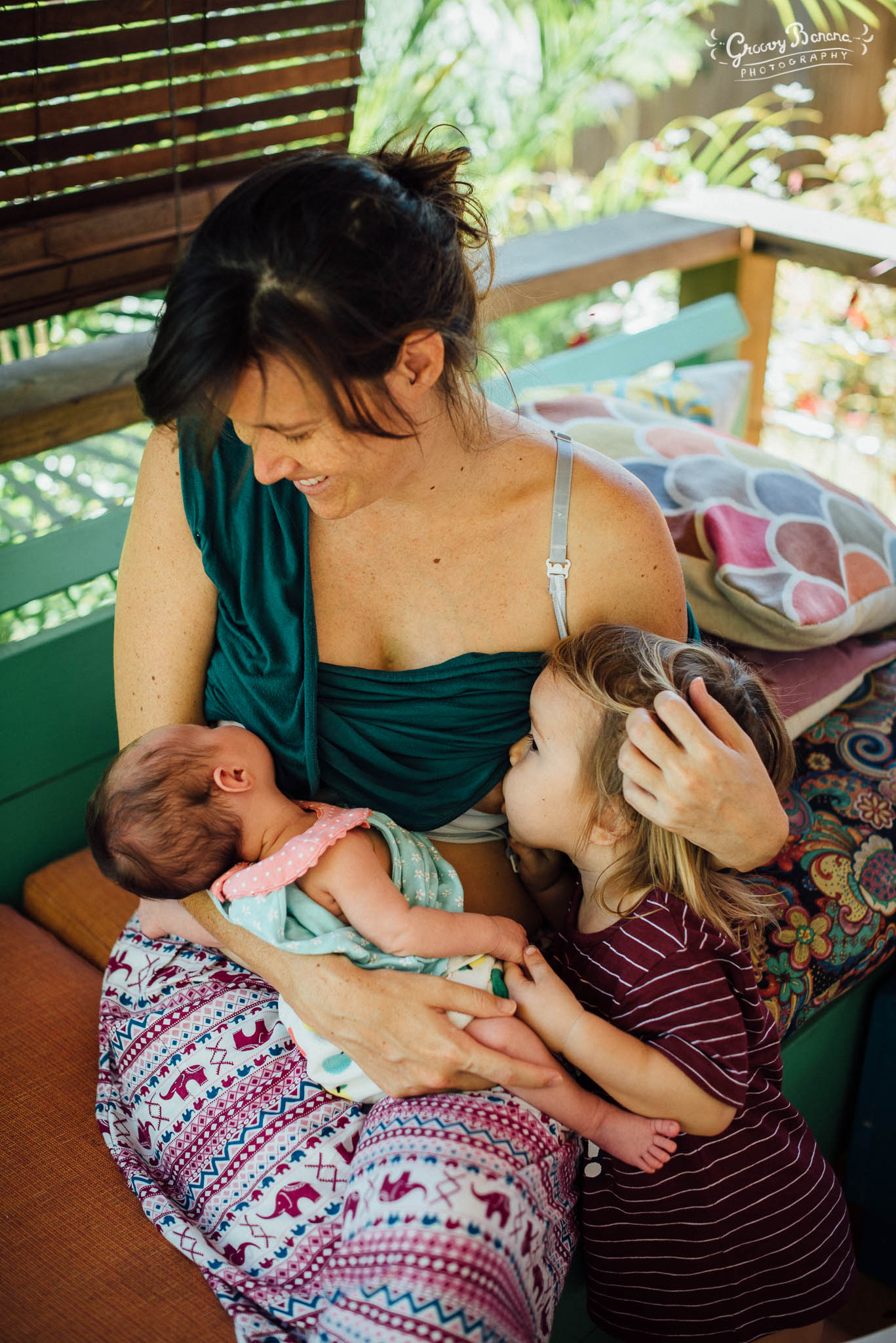 She explained: “Before having kids I never imagined breastfeeding for so long or even at all for that matter.

“In France, the average duration of breastfeeding is seventeen weeks and we even mentioned bottle feeding our first baby so that Benoît could share precious moments as well.

“It [breastfeeding] came very naturally at birth. I didn't even have any formula and there wasn’t any at the hospital here so I was lucky it ‘worked.'

“My midwife whispered into my ear that some people were shocked when they knew four year old children who were still breastfeeding and that she had breastfed her child until age four. 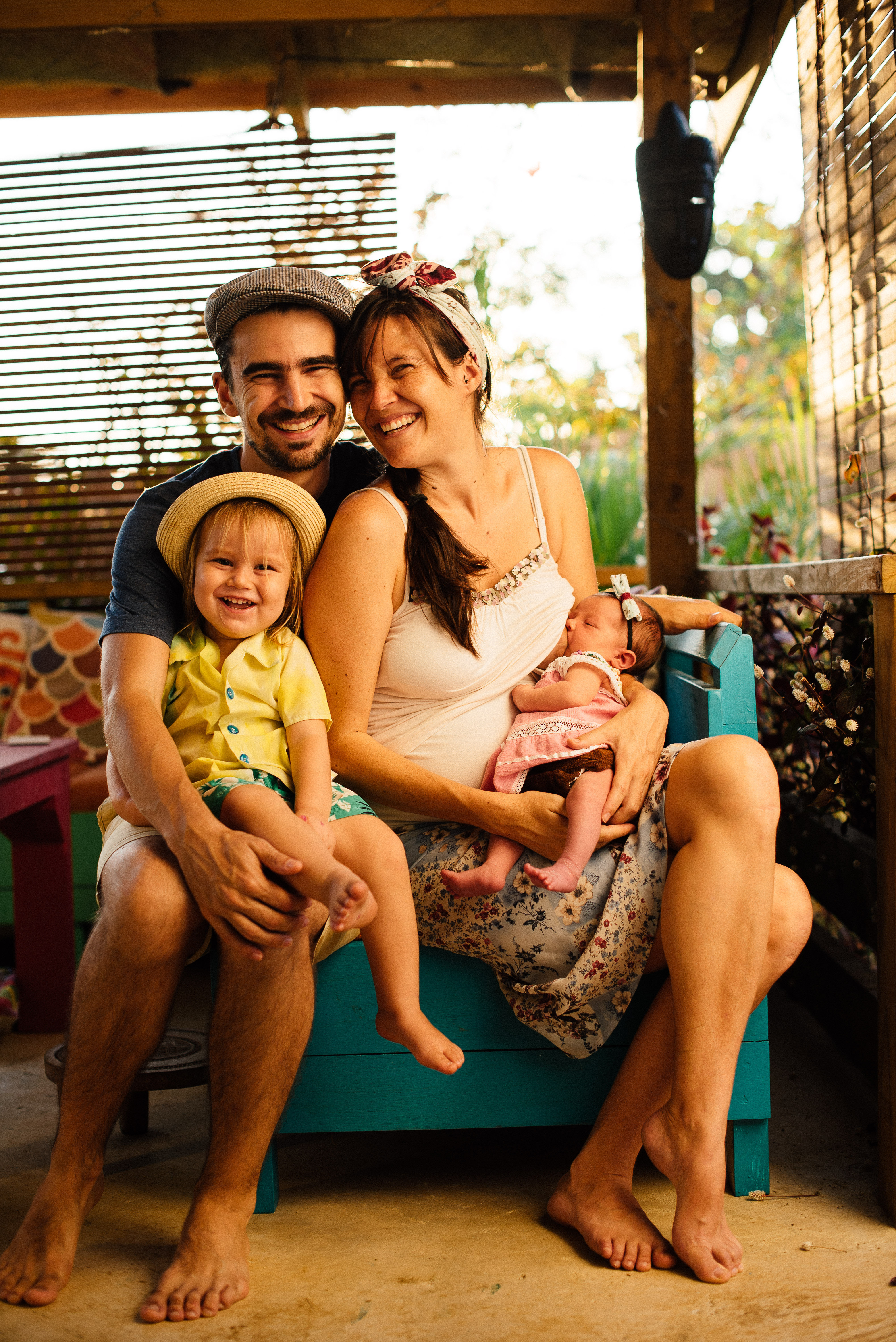 “I only read about all the benefits of breastfeeding after having started my breastfeeding journey and I don't really have plans to stop as I hadn't planned it before.”

Gaëlle and Benoît are also parents to daughter, Maia, 3, who is breastfed.

Gaëlle has been breastfeeding for five years and three months in total and she even practices tandem feeding with Ewen and Maia.

She claims that the experience of breastfeeding at the same time has strengthened their sibling bond.

“I am also happy I have tandem breastfed – something a friend had told me about before I was pregnant with number two and I wanted to do it for their bonding” explained the mum.

“It was something I had never heard of before having kids” 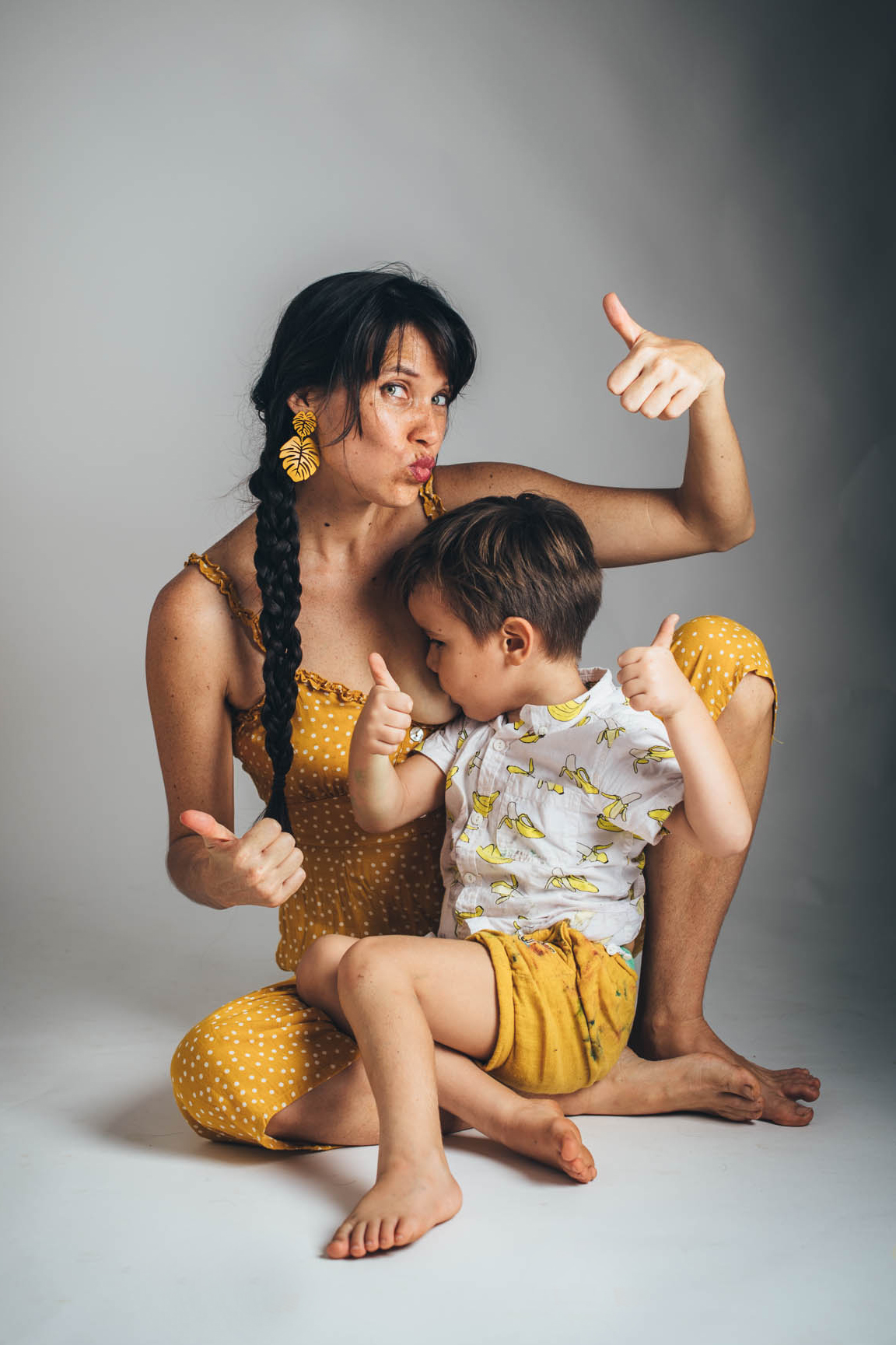 Ewen briefly breastfed less when Gaëlle was pregnant with Maia but after she gave birth, Ewen started to feed again due to his mother’s new supply of milk.

She says: “I’m still aiming for natural weaning, big baby is five, and even if it is not always a smooth path, sometimes I end up being the mad mum with crazy kids stuck on the boobs. I love our relationship and our breastfeeding moments.

“It’s not about feeding now but comfort when the children are hurt, upset, sad or cuddles in the morning.”

Each day is different but on average Gaëlle breastfeeds Ewen between zero and three times a day and breastfeeds Maia between five and 10 times a day but she believes that depending on circumstances, it's important to have boundaries, to protect her sanity.

Gaëlle doesn’t feed her children at night or when they wake up at night and instead offers them water or regular milk before bed. 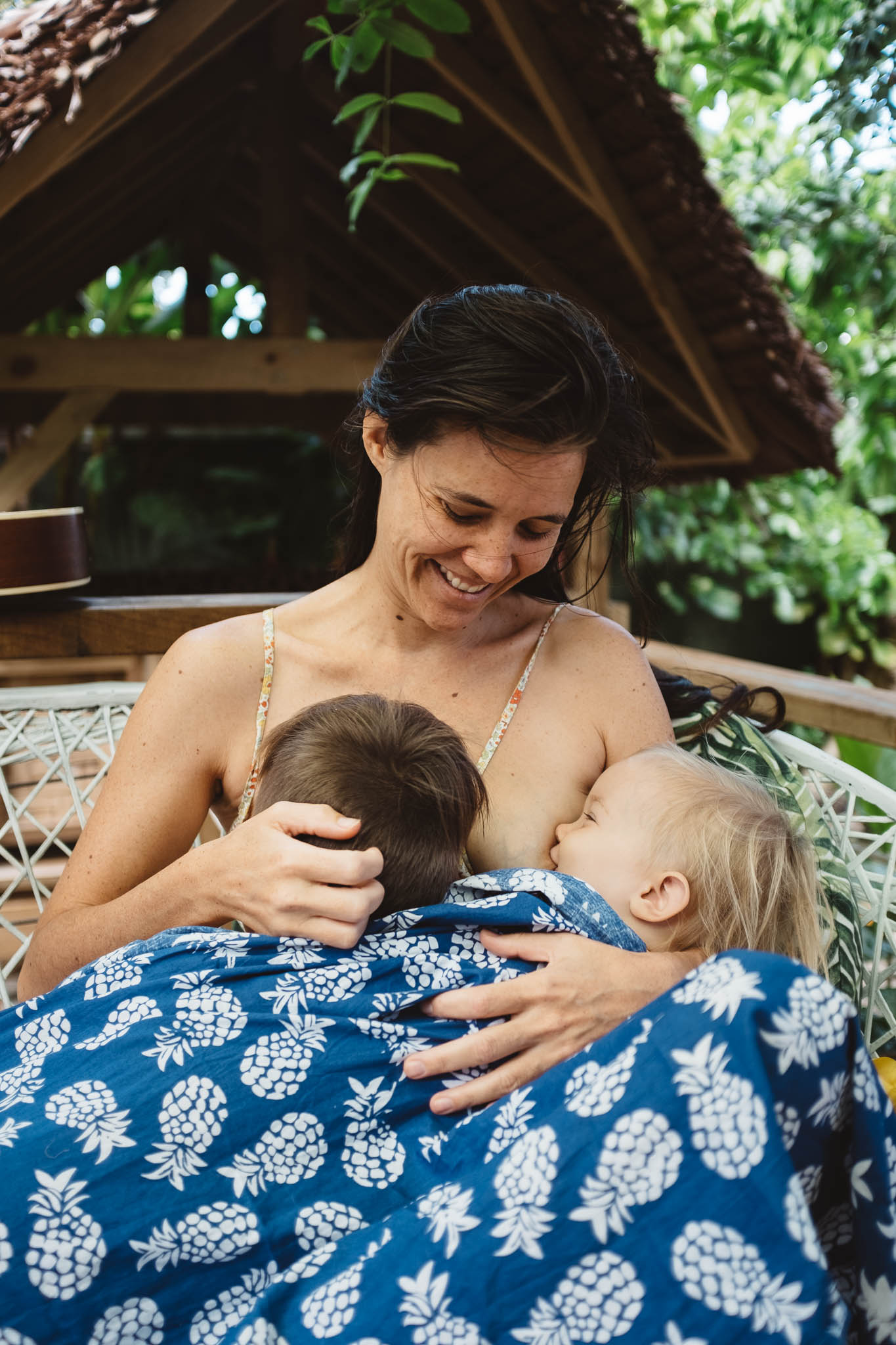 Gaëlle has no fixed date on when to stop breastfeeding and she is passionate about breaking the stigma that surrounds extended breastfeeding by sharing pictures of her performing the natural act online and in public.

Despite her positive approach, Gaëlle has received some negative comments from people asking when breastfeeding turns into sexual abuse, incest, and tell her to feed her children ‘real food’ – which she already does.

Gaëlle said: “Once, my eldest was just two and I had just had my second one, someone told me it was gross. To which, I didn't know what to say.

“Most of the time with the youngest, people here in Vanuatu would say, ‘you still breastfeed, that's great’ because it’s more common here than in other countries.

Misconceptions people believe and say and that I should cut the cord, it’s incest, sexual abuse, and that they have to eat real food

“When the oldest is being breastfed, people are amused, surprised, laugh and really look at me but they aren’t disgusted like people could be in Western countries.

“I think in France, if you breastfeed a kid older than one year old, people are pretty shocked and disgusted.

“I’ve had inappropriate comments from drunk friends in France which was pretty gross when Ewen was two and my youngest just born such as, ‘Oh lucky him, I would like to do the same.' One even apologised afterwards.

“Misconceptions people believe and say and that I should cut the cord, it’s incest, sexual abuse, and that they have to eat real food, which they do, started at six months old with baby lead weaning. 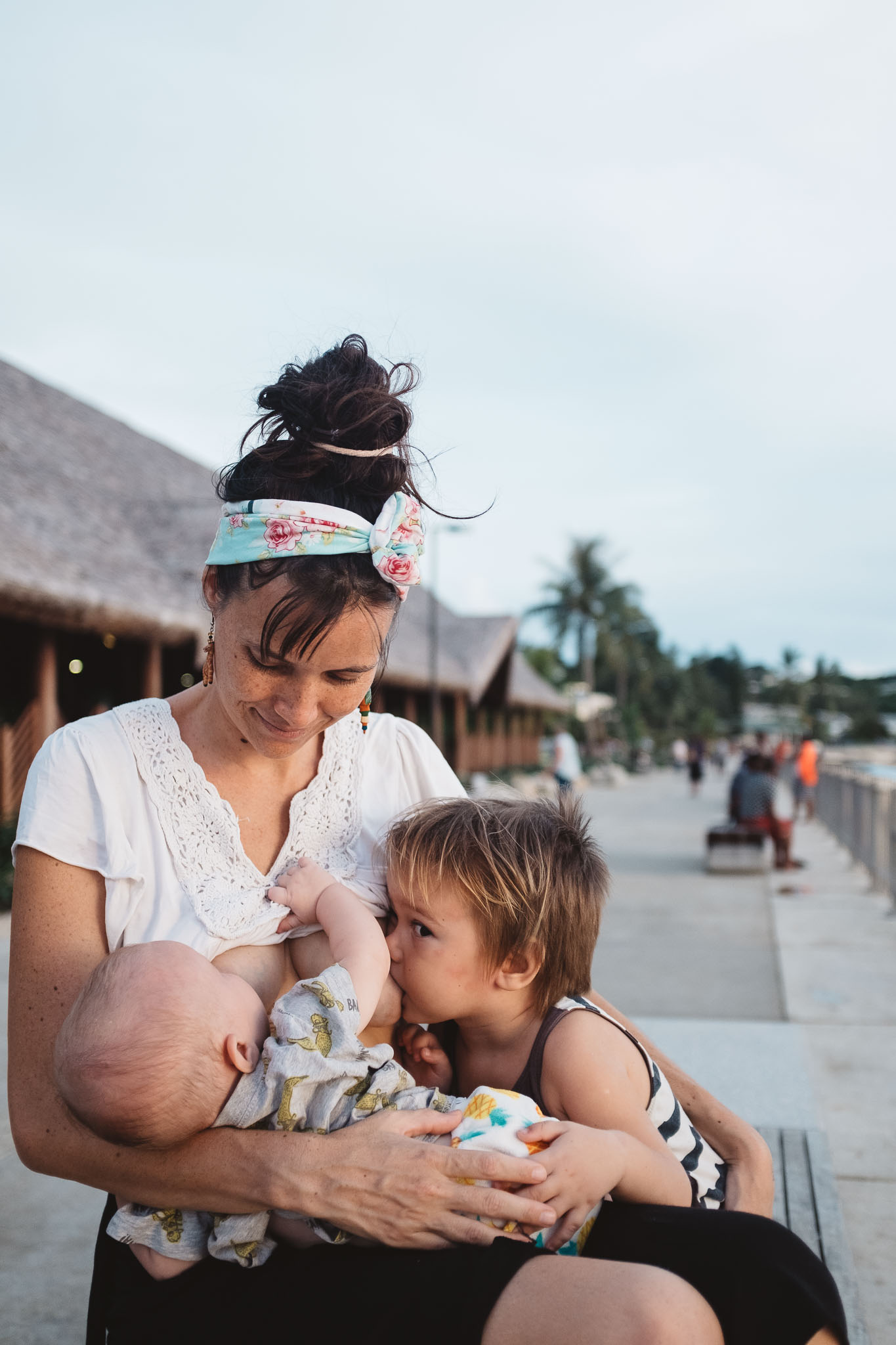 “The reaction on Instagram is almost always positive. I received one comment genuinely asking about if it was sexual abuse on a post with me and my five-year-old.

“It is definitely harder to breastfeed an older child and at three, there is a kind of ‘back on the boobs’ phenomenon that is pretty hard to handle.

“There are times where you want it to stop but you don't want to stop really, and the kids are having difficulties understanding boundaries and my right to say no. The screams are really something sometimes.”

Gaëlle and Benoît practice conscious parenting – a style which focuses on the parents engaging and connecting with their children using emotionally intelligent discipline choices rather than punitive methods – thriving on connection and empathy.

Gaëlle doesn’t want to make women who choose not to breastfeed guilty for their choices. She only wants to normalise breastfeeding so women feel empowered to feed their children in any way they choose.

“Everyone has the right to do whatever works the best for them in their feeding journey and not feeling ashamed about it. 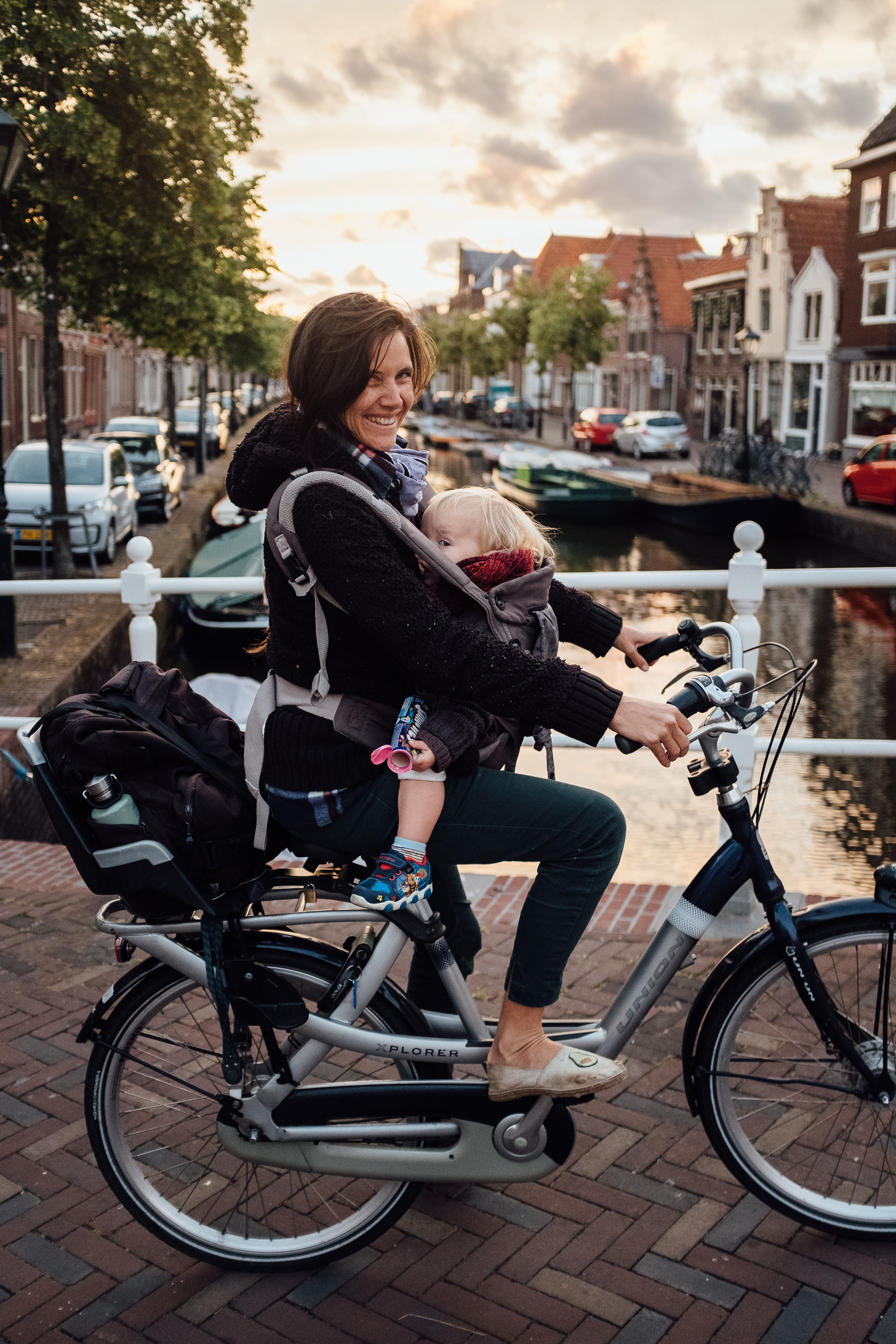 “I like having friends asking me for advice, being able to redirect them to La leche League advisors or share my experience with them.

“Breastfeeding is life-saving especially with newborns that need to breastfeed all the time and breastfeeding permits me to continue to have an almost normal life and bring my kids everywhere without worrying about warming a bottle in a microwave or bringing lots of gear.

“It’s so healthy, economical and practical. It is empowering.

“Boundaries, we all have boundaries and shouldn't be ashamed of them. I had to stop breastfeeding at night because both kids at some point were feeding for thirty minutes an hour without falling asleep and then I had to deal with huge tantrums and screaming when I wanted to stop or didn't want to breastfeed.

“It's OK to breastfeed – it's the best way to soothe your kids and it's perfect for bonding. It can be hard and it's good to talk about it. Don't make it shameful or taboo.”

In other parenting news, a mum saves time by putting her daughters to bed in tomorrow’s clothes and insists it’s a morning lifesaver.

And as we told you previously a mum invented a brilliant tip to keep kids quiet by telling them they need to lie still to ‘charge’ their glow-in-the-dark pyjamas.

Plus a mum was in hysterics after daughter’s school photos go ‘very, very wrong’ thanks to rude outfit fail.

Buyagift Black Friday sale 2020: What To Expect | The Sun UK