Indeed, from the pandemic’s fashion wreckage, Van Noten is planting a seed for growth in the U.S. — a massive, 16-room, 8,500-square-foot brick-and-mortar boutique opening Friday on the site of the shuttered Opening Ceremony. It will be the Belgian designer’s largest retail store in the world, as well as functioning as a community space and art gallery to engage L.A.’s diverse creative class.

“For me, it was important to have a different kind of store. The last thing I wanted was a marble palace. It had to be a space people can come and discover other things, not just clothing,” Van Noten said via video call from Antwerp, where he began working on the project in July shortly after the buildings became available, designing floor plans, shopping 1stDibs for furniture and supervising everything remotely as if it were his own house. 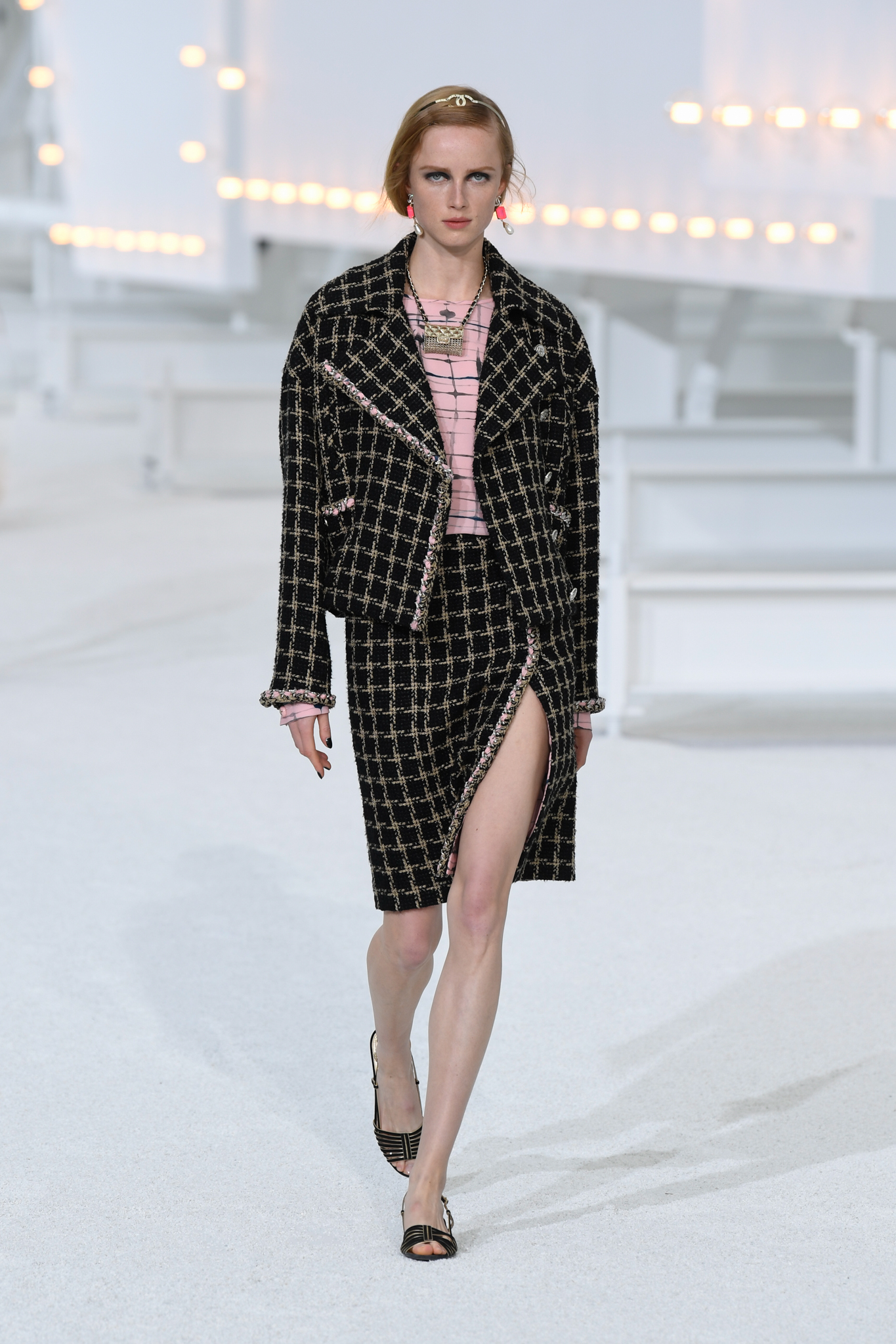 The site is actually comprised of two ivy-covered ones, The Big House with two floors of rooms for men’s, women’s, accessories, Archive and more, and The Little House for temporary pop-ups and events, which will start by featuring Ann Demeulemeester’s tabletop designs for Serax, and one day post-COVID, if Van Noten has his way, host a chocolate contest pitting the best makers from Belgium against ones from L.A. 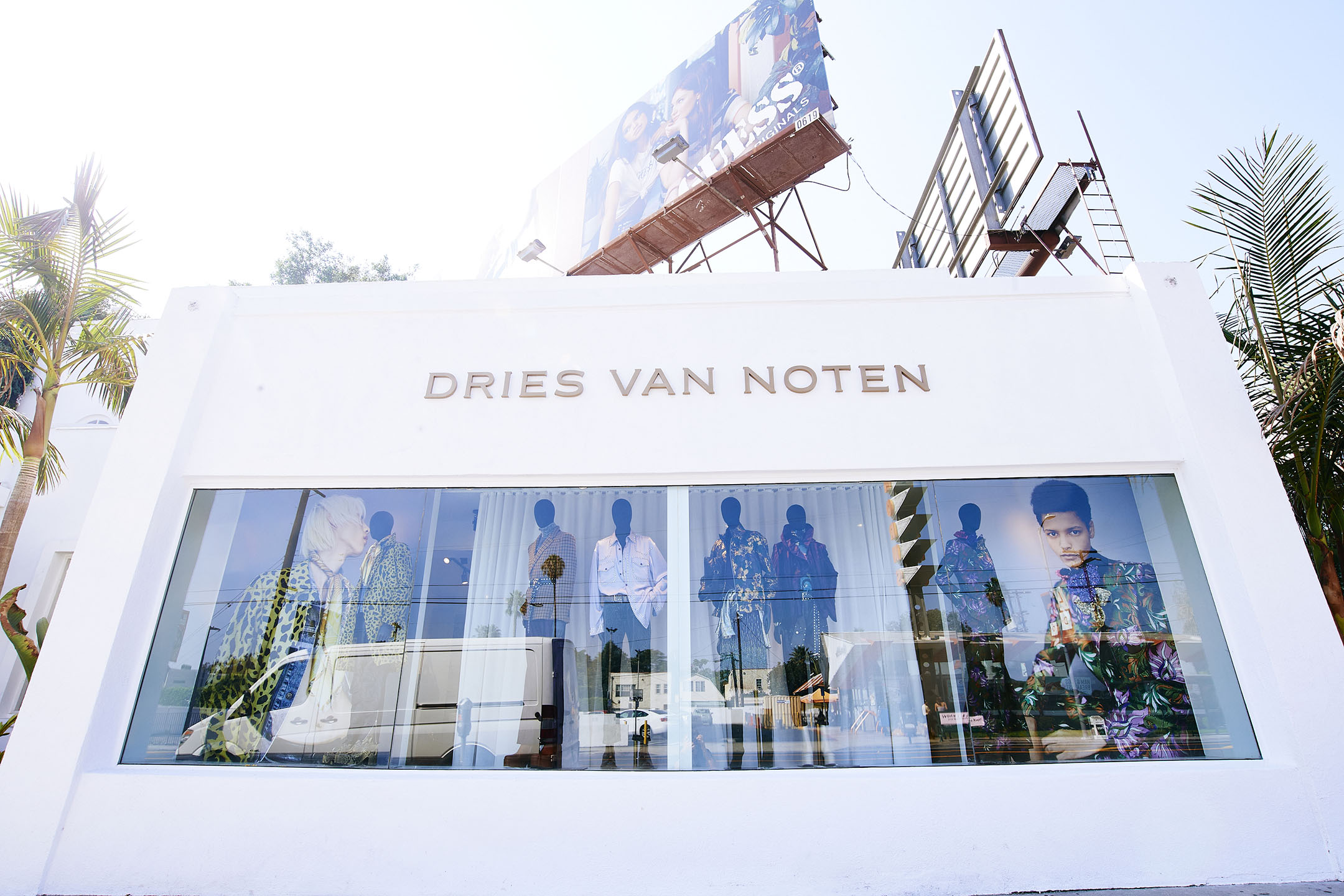 “Every store has to fit the city. In the same way we have the store in Paris which is very much like a Paris apartment, here it was important to have a very L.A. experience,” said the designer, who is calling the L.A. store a “creative lab.”

It’s a fitting concept for a designer whose body of work has long been influenced by other creatives, from filmmaker Pedro Almodovar to jazz musician Louis Armstrong, to rug artist Alexandra Kehayoglou, who made the “magic carpet” for his fall 2015 runway.

Van Noten designated the store’s white walls a canvas for local artists Adam Tullie, Stephen Zerbe and others to create works, leaving their mark “like graffiti but at a higher level.” Just inside the sunny yellow door, a vintage 1928 vintage Steinway invites more play. “Maybe you have a piano player from a music school or a celebrity who just plays a little bit. And if you want to play a record, also feel free,” he said of the stay-a-while atmosphere he’s trying to create.

Each month the store’s Sound and Vision corner, fitted with a Seventies-era sound system, will feature a selection of 20 records from a different music personality, starting with Belgian duo 2ManyDJs.  “We will buy three of each record and sell them, so it becomes a growing collection,” Van Noten said of the lo-fi playlist concept. 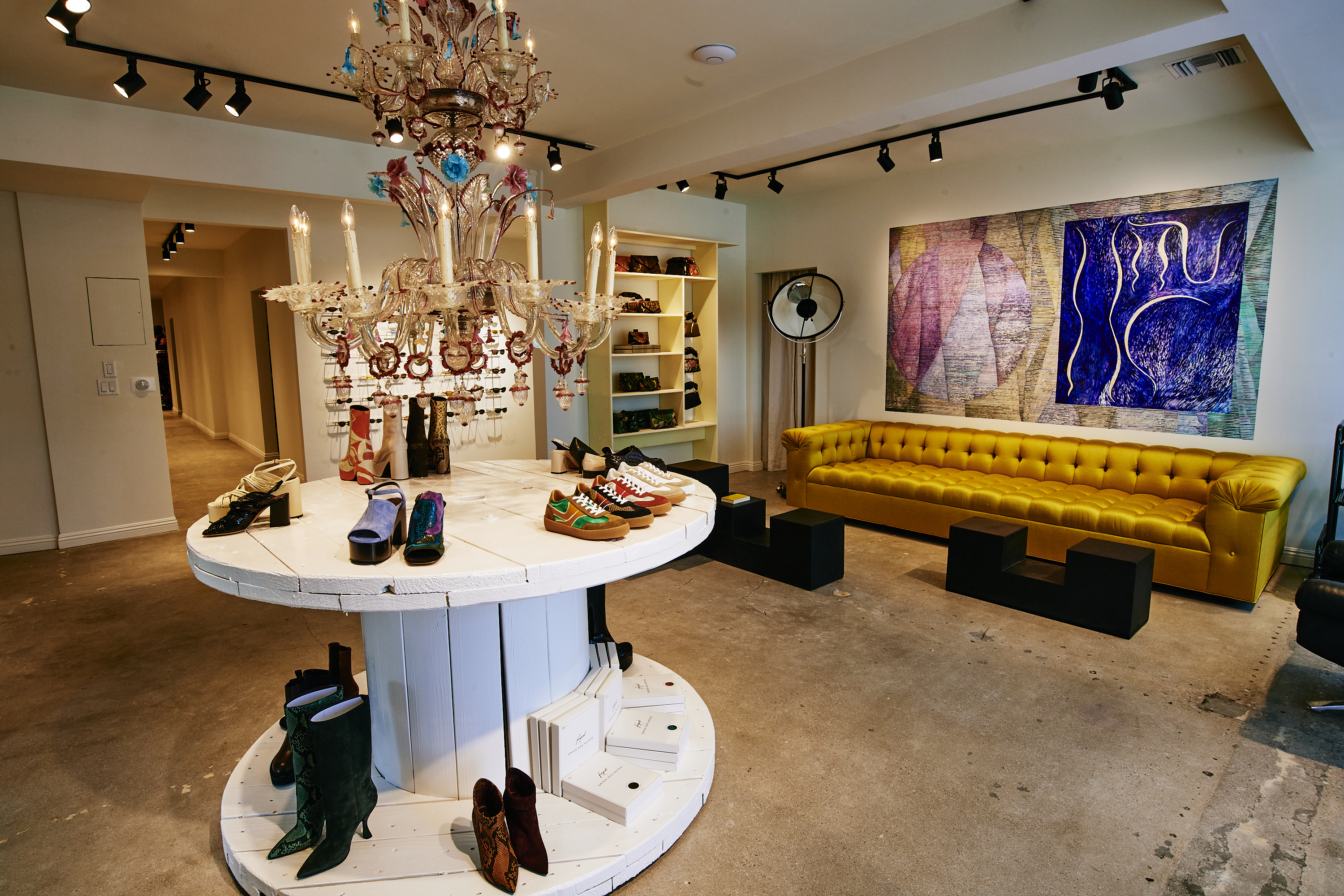 Cut flowers from local florist Gilly’s speak to Van Noten’s love of all things botanical, as do Japanese artist and runway collaborator Azuma Makato’s photographs on windowsills, and a selection of Japanese gardening tools for sale.

The furnishings are a high-low mix–a spectacular pink Murano glass chandelier over a $25 giant electrical cord wheel used as a table for displaying shoes, for example–with an emphasis on repurposed pieces, such as Johan Viladrich workbenches made from recycled industrial materials. A capsule collection of envelope clutches made from fabric remnants is exclusive to the L.A. store, which also has garment bags and other packaging made from recycled materials.

On the subject of sustainability, the store’s men’s and women’s Archive Rooms are sure to be among the most exciting features for diehard Dries fans, who may recognize the pages of his book, “100 Fashion Shows,” papering the walls.

“Every season I kept pieces I thought it was a pity to put in the sale,” said Van Noten. “So we have racks from the late Nineties to the 2000s to recent collections, including our collaboration with Christian Lacroix, all mixed-up and arranged by color. Also there is jewelry and scarves that are 10 or 15 years old that we’re selling here.” (Among the gems spotted on the racks, where everything is tagged with season and year, a spring 2018 tinsel embroidered pink star jacket, a fall 2016 sleeveless column gown from the Marchesa Casati collection and a fall 2016 Marilyn Monroe print men’s suit). Post-COVID, customers will also be able to bring back their old pieces in good condition to resell them. 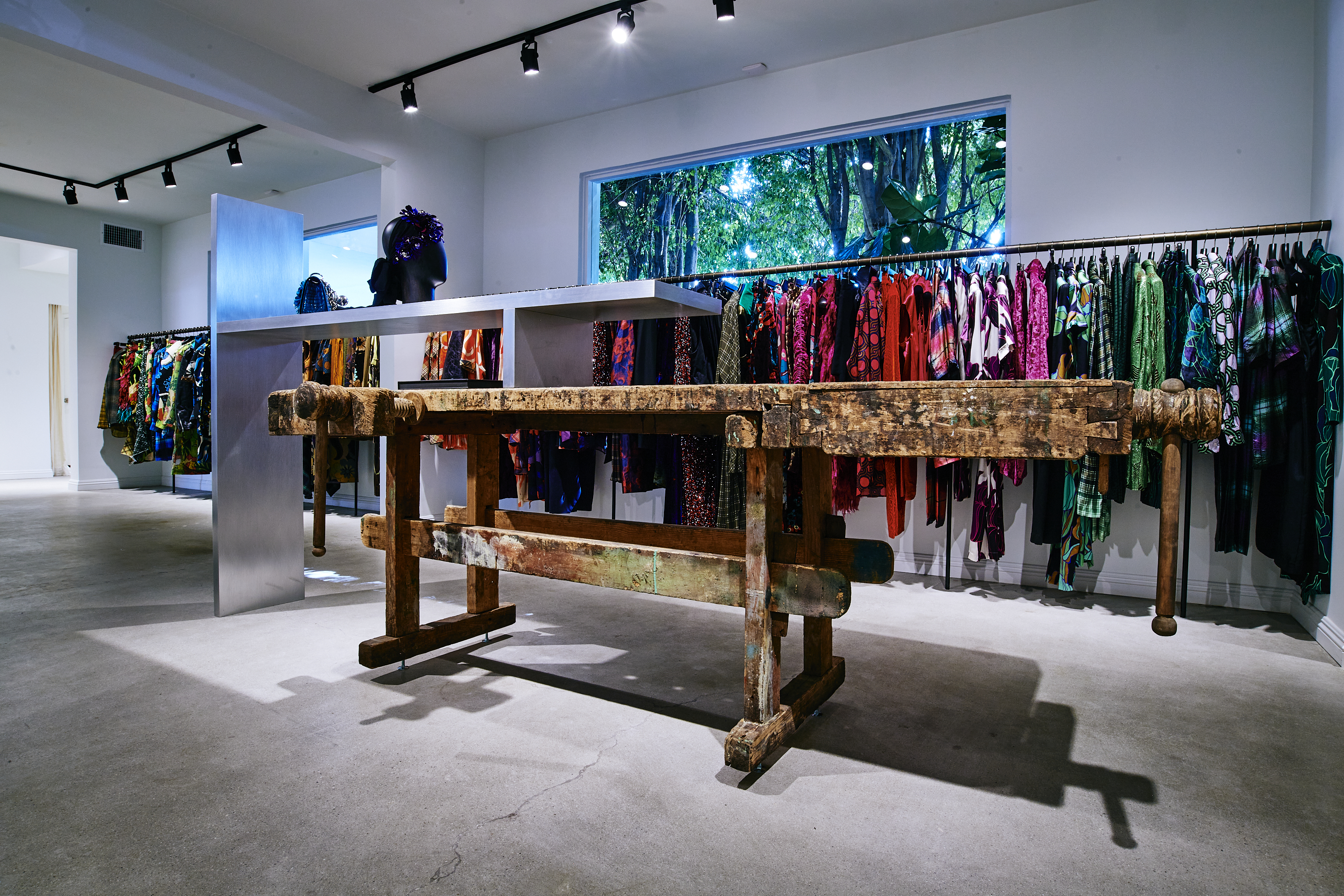 Besides contributing to the circular economy, the effort adds to the thrill of the hunt.

“Two summers ago, we did the men’s collection with [Danish designer] Vernon Panton artwork and we see now there has been more demand for it than ever, maybe because people are seeing it being worn. We kept the leftovers, the shorts and shirts and now put them in the store,” Van Noten said.

Another room is reserved for the work of outside designers, starting with sculptural jewelry by London-based Alan Croccetti, displayed on whimsical busts by artist Richard Stipl. “We will invite young fashion designers, local and international…if someone wants to give a lecture, or a musician perform for one night, we can do it. The idea is it is not always about selling things,” he said.

The opening comes at a time of retail expansion for the designer, whose business was acquired in June 2018 by Spanish fashion and fragrance firm Puig. In August 2020, he opened his first store in China, in Shanghai.

In the U.S., many assumed he would open in New York first. “It’s a bit more relaxed in L.A. New York is less forgiving. You have to hit it right away. Here we can play a bit, and that’s what we’re going to need in these next months,” Van Noten said.

While department store closures have made his expansion of d-t-c retail all the more pressing, Van Noten wants to be cautious.

“There are going to be more stores, but we need to find the right locations…We have to be very careful each store keeps its identity and reason for being. So it’s not that it becomes a formula.”

So far, the designer said his relationship with parent company Puig has been positive. “It’s been a very good marriage–and they give me the possibility to do things like this, which is fantastic. Even at a time when a lot of people might say be careful, don’t take risks, they just said ok, go for it and we’ll see what is going to happen and cross our fingers.”

Van Noten is by no means an L.A. regular; the last time he was in the city was five years ago. But he appreciates the atmosphere of free-flowing creativity, even from afar, which influenced his spring 2021 women’s collection just shown via film at Paris Fashion Week. It was a Bermuda shorts and swimsuits heavy lineup of rainbow brights, metallics and psychedelic prints of suns, moons and palm trees, paying homage to 1920s and ’30s New Zealand artist Len Lye. 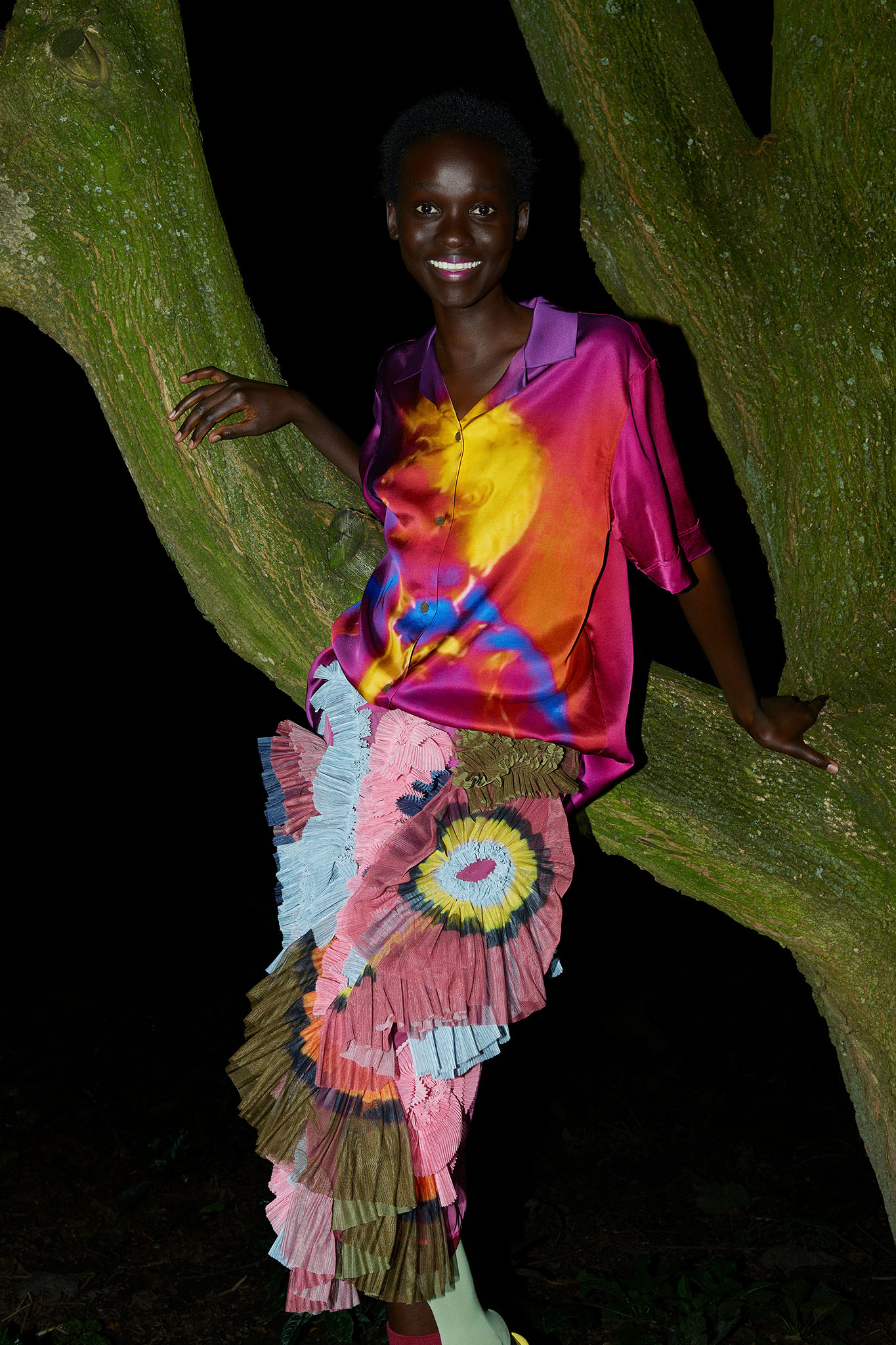 “The whole mood, which is typical of L.A., is what the world needs now–a kind of casualness and relaxedness and not that kind of fake-ness. Fake-ness has to go,” the designer said. (How far L.A. has come from its reputation as Fake-ville!)

Van Noten now has space to welcome in celebrity fans of his brand like Beyoncé, Sarah Paulson, John Legend, Thom Yorke, Diplo, Swae Lee and the Jonas Brothers. “But I don’t want to play the game of the big houses, I want to stay very reasonable,” he said of celebrity dressing. “And also I feel that may be the wrong kind of fashion for the moment.”

Clearly, Van Noten has taken quarantine to muse on the changing times: “In the beginning, it was scary. But you start to look at things in a different way, and your values in a different way. Things which were so important now you see are ridiculous. And you appreciate things you take for granted, that you are a spoiled brat, and you’re very lucky to live in a beautiful house with a beautiful garden when people have to quarantine in a tiny apartment.”

COVID-19 has undoubtedly set in motion an industry reset, he said.  “We all knew something had to happen in fashion, because everybody felt already quite uncomfortable with the way fashion was going and the speed and more and more and more. In that way, it’s been quite healthy. It’s a pity it had to happen this way, but what’s happening now is good for fashion.”

While he’s staying put in Antwerp for now, and no big store opening celebration is planned, Van Noten is hoping to be able to see it soon. “It’s been so frustrating to have to do everything and meet everyone over Zoom,” he said.

“Maybe some things will work and some won’t,” he said of the new retail experiment. “But we have a platform to take risks, and in the time we’re living in that gives me hope.” 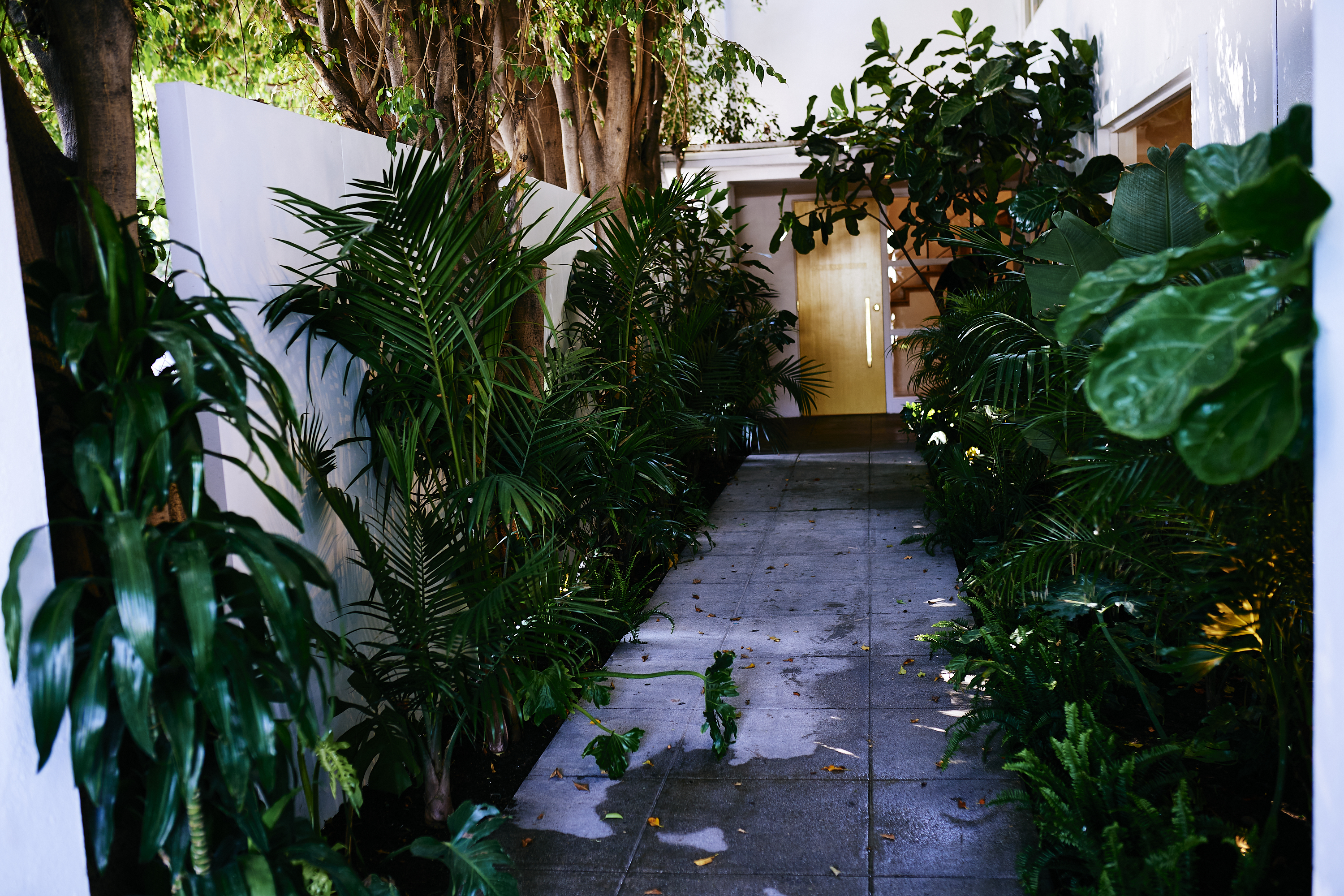