The First Lady and the US President have been in Japan recently, during a four-day visit. However, today, the pair were pictured returning to the White House. Melania Trump, 49, is a former fashion model, and, having regularly stepped out in designer outfits over the years, many people have a great interest in what she wears. This afternoon, the First Lady opted for a fitted blue dress.

The navy garment had a bateau neckline, and a fit and flare skirt.

It had been adorned with a white, blue and green pattern on the top left hand corner.

Melania teamed the look with a pair of white pointed high heels.

She also sported a pair of large sunglasses.

While the outfit details regarding the First Lady’s latest look are not currently known, some followers of her style have been keen to find out where Melania sourced her recent ensembles. 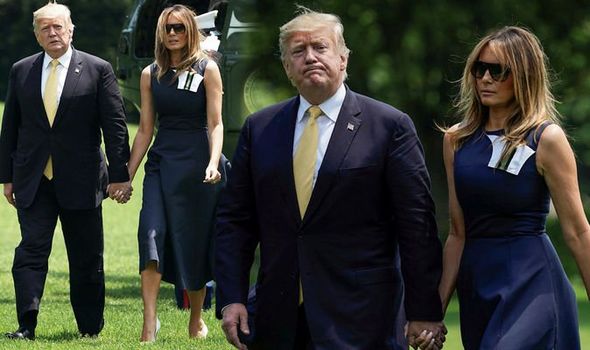 In fact, the now-retired model has worn labels including Calvin Klein, Roland Mouret, and Carolina Herrera during the overseas visit.

This includes a £3,500 Carolina Herrera dress which she wore to a state dinner.

The First Lady teamed it with a pair Christian Louboutin pumps, which can be bought for £478 at The Luxury Closet.

Earlier in the trip, Melania had worn a £5,847 white dress, by the same designer. 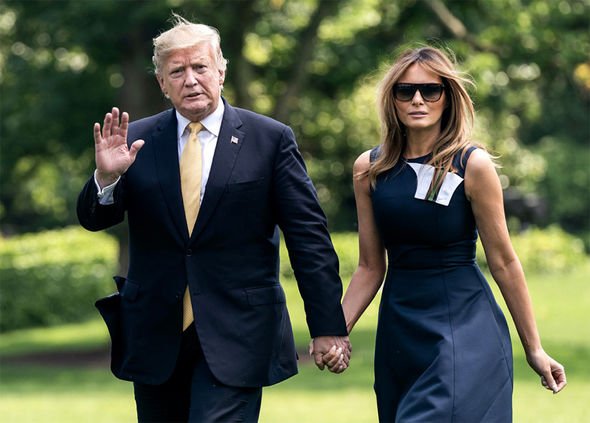 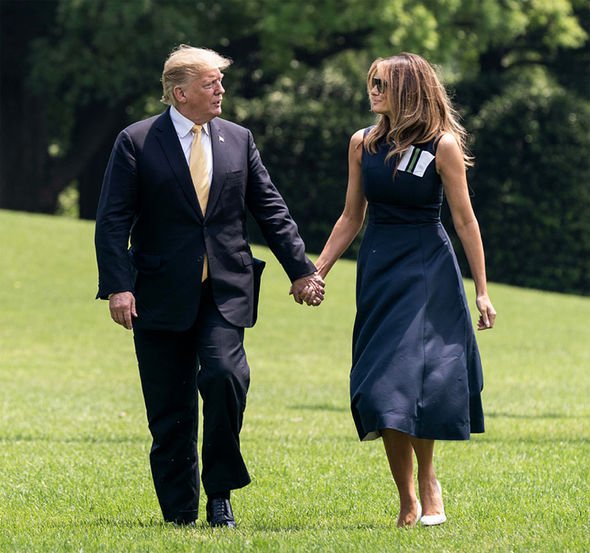 The short-sleeved design had been adorned with a floral pattern.

She had been attending a meeting with Akie Abe, who is married to the Japanese Prime Minister Shinzo Abe.

Melania later posted photographs of the outing on Twitter, and wrote: “Thank you Mrs. Abe for a wonderful afternoon at Akasaka Palace.”

She held hands with her husband Donald as they stepped off the plan at Haneda International Airport in Tokyo, Japan.

Mum-of-one Melania can speak more languages than any other First Lady before her: English, French, German, Italian, Serbian and of course her mother tongue, Slovenian.

This also makes her the only First Lady whose first language is not English.

After Jacqueline Kennedy, Melania is the second First Lady who is a practising Catholic.

She met Pope Francis as part of a foreign tour with her husband and stepdaughter Ivanka last year.

Her skills aren’t confined to print, and she appeared in a commercial for Aflac, an American insurance company, in 2005.

Melania’s parents are Amalija Knavs and Viktor Knavs, and the couple live together in Washington.

She has one sister, Ines, who is reported to live in New York and work as an artist.

On May 7 2018, Melania launched her flagship campaign as First Lady, BE BEST, which The White House describes as “an awareness campaign focused entirely around the well-being of children”.

There are three main strands to the initiative: well-being, social media, and opioid abuse.

Kit Harington Has Checked Himself Into Rehab for Stress
Entertainment