Kate wore a bespoke Alexander McQueen coat. Appropriately it took a note of military tailoring with tassels on the shoulders.

It has a stiff collar and capulet details at the waist.

White buttons made for a nice contrast against the fabric and helped to highlight the pearl and diamond earrings famously borrowed from the Queen.

The Duchess of Cambridge wore a badge with three poppies.

Kate’s hat was from famous British had designer Philip Treacy. 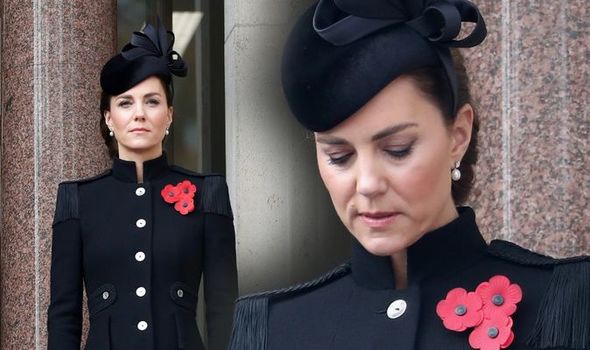 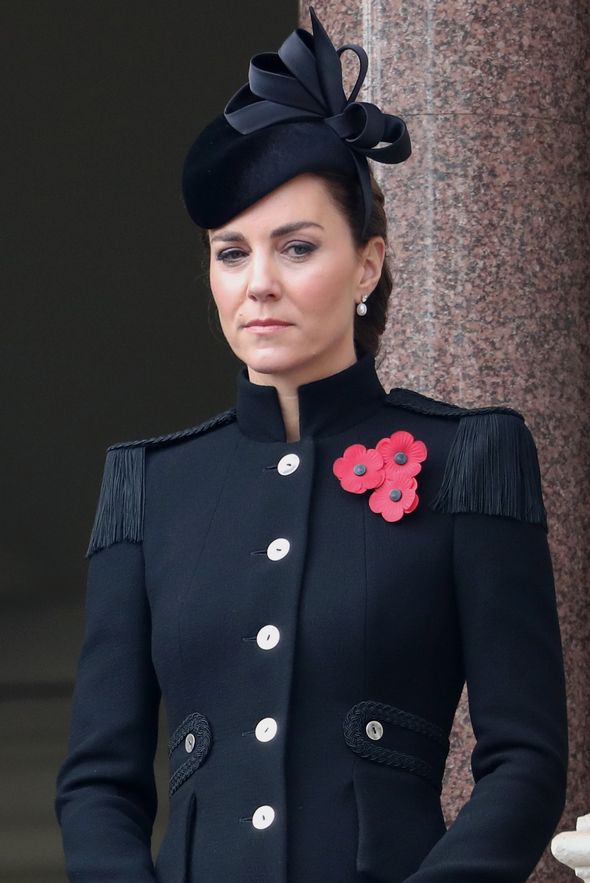 One wrote: “I’m becoming obsessed with how flawless Kate Middleton / Duchess of Cambridge is. She always looks immaculate, professional yet a hint of being approachable.”

Another said: “Just want to put this out there….. Kate Middleton is the epitome of elegance and style! Saw her watching at the Cenotaph and she’s beautiful.”

Kate has had the stunning earrings on loan from the Queen for some time.

It is a sign respect between the two women that Her Majesty allows the wife of Prince William to wear these gems.

She has worn them often herself, clearly marking out the pieces as a favourite of the Queen.

While Kate wears the originals, the Queen commissioned a copy cat pair for Meghan Markle to wear.

How did Kate Middleton become a royal?

Kate Middleton, or Catherine, Duchess of Cambridge, was born on 9 January 1982 at the Royal Berkshire Hospital, Reading, England.

She was born to Michael and Carole Middleton, a former flight dispatcher and air hostess. The couple founded a party supplies company, Party Pieces, in 1987 – now estimated to be worth £30 million.

Kate has a younger sister Pippa Matthews, 34, and a younger brother James Middleton, 31.

Kate and her family moved to Amman, Jordan, in 1984, where the future Duchess was educated at an English-speaking nursery school.

After moving back to Berkshire the family sent Kate to private school, St Andrews School. She went on to briefly study at Downe House before moving onto Marlborough College where she boarded.

For university the young Kate attended the University of St Andrews in Fife, Scotland. Here she was awarded an undergraduate MA (2:1 Hons) in history of art.

Kate met Prince William when they were both studying at St Andrews, and both living in St Salvator’s Hall. Famously, William reportedly took a fancy to Kate after she wore a see-through dress during a fashion show.

In 2003 the couple began dating and lived together during their second year of university.

The couple split in April 2007, however, in October they were back together.

Prince William proposed to Kate Middleton with his late mother Princess Diana’s engagement ring in October 2010. The couple were holidaying in Kenya at the time.

On 29 April 2011 they married at Westminster Abbey with a whopping 26 million watching the event live.

Kate wore an Alexander McQueen dress worth a reported £250,000 on the big day.

Where does vanilla flavouring come from and why is it related to beavers?
Entertainment