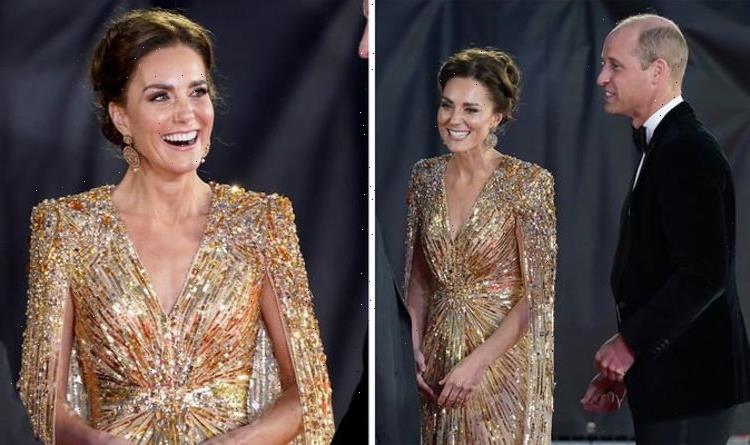 The Duchess of Cambridge looked spectacular in a glittering gold dress and matching gold heels, as she accompanied her husband Prince William and her father-in-law Prince Charles, and Camilla, Duchess of Cornwall to the premiere. Kate Middleton stunned in a Jenny Packham dress – the ‘Cape Effect Sequinned Dress’, which unsurprisingly has already sold out. The dress costs a whopping £3,893.28, however before going out of stock was reduced to £1,168.35.

Royal fans could not contain their excitement at Kate’s sensational gold glistening look.

A fan account for the Duchess, Middleton Maven, tweeted: “The Duchess is stunning in a gold gown tonight! Wow!”

The Duchess of Cambridge was also sporting her gold ring which she wore to the wedding of Prince Harry and Meghan Markle in 2018.

This gold ring was rumoured to be Prince William’s push present to Kate after she successfully delivered their third child, Prince Louis, the month prior to the wedding.

She previously wore the earrings as her and Prince William arrived at the National Monument of Pakistan in 2019.

The Duchess sported gold heels underneath the gown, which were from Aquazzura, which is a Florence-based luxury footwear brand by Edgardo Osorio.

“This has got to be one of The Duchess of Cambridge’s best looks.”

The James Bond premiere was also attended by Camilla, the Duchess of Cornwall, who wore a blue glittering gown to complement Kate’s nicely.

The event is being filmed live for Facebook Live, and the film cast were being interviewed by Clara Amfo.

Stars being interviewed include Rami Malek, Daniel Craig, as well as Billie Eilish who sings the score of the film: ‘No Time to Die’.