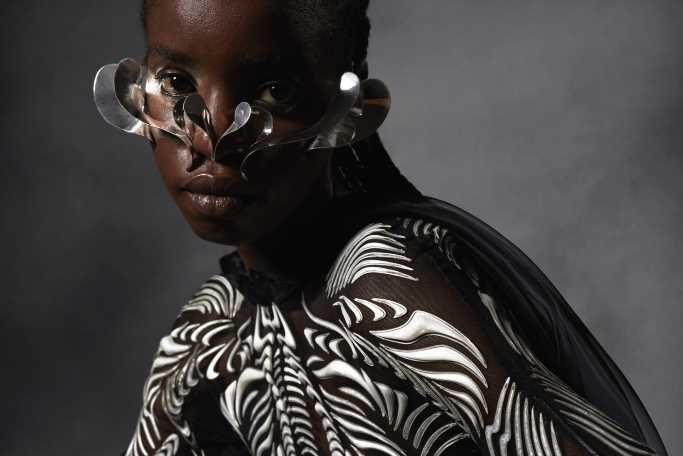 As space travel becomes a “thing,” Iris Van Herpen turned the focus back on our blue planet in a spectacular way.

The short film for her fall couture collection brings a lump to the throat and elicits wonderment with models seemingly levitating on top of the Dolomites, their dramatic sleeves fluttering or hovering in mid-air. (Spoiler alert: There’s a trampoline supervisor in the credit roll.) And then there’s elite skydiver Domitille Kiger plummeting headfirst towards Earth — for real — in a heavily embroidered gown that stretches and twitches traveling at 300 kilometers per hour.

Van Herpen said the collection was inspired by Kiger’s artistic, choreographed free-flying – and also the landmark photo “Earthrise,” captured by the Apollo 8 crew of our planet peeking out from beyond the lunar surface.

“It’s really this otherworldly perspective that I wanted to bring in as an energy into this collection,” she said in an interview. “And in that sense, it was really a perfect match in what Domitille is doing because it’s really beautiful how she is playing with the elements and pushing her own boundaries of what it is to be human, and also how we can extend or transcend our boundaries.”

“In the beginning I didn’t know whether it was possible myself. Because of course the craftsmanship we do is really delicate and I had no idea if it would survive these extreme conditions,” the designer confessed.

While the first prototypes were damaged in test jumps and wind-tunnel tests, the final dress — and Kiger’s fall to Earth became a visual poem about the beauty and fragility of our planet, the thousands of blue discs swirling on its surface made of recycled ocean plastic and stitched by hand.

The other 17 dresses in the collection exalted more fragile techniques. Three were done in collaboration with French-British artist Rogan Brown, who creates lace-like artworks using a scalpel and paper. For one minidress, Van Herpen arranged the delicate fronds in a swirling caress.

Kiger’s dress is not the most beautiful, but it comes to life in a way that is unforgettable. At one point, the skydiving cameraman Alexandre Aimard captures her passing in front of the sun, the light completely absorbing her.

“And then she frees herself from it,” Van Herpen marvelled. “It really radiates freedom, in the biggest sense of the word. I think that’s what I hoped this collaboration would bring.”