Home » Fashion » I got a mummy makeover after two kids but cut-price tummy tuck left me with a gaping, pus-filled hole in my belly 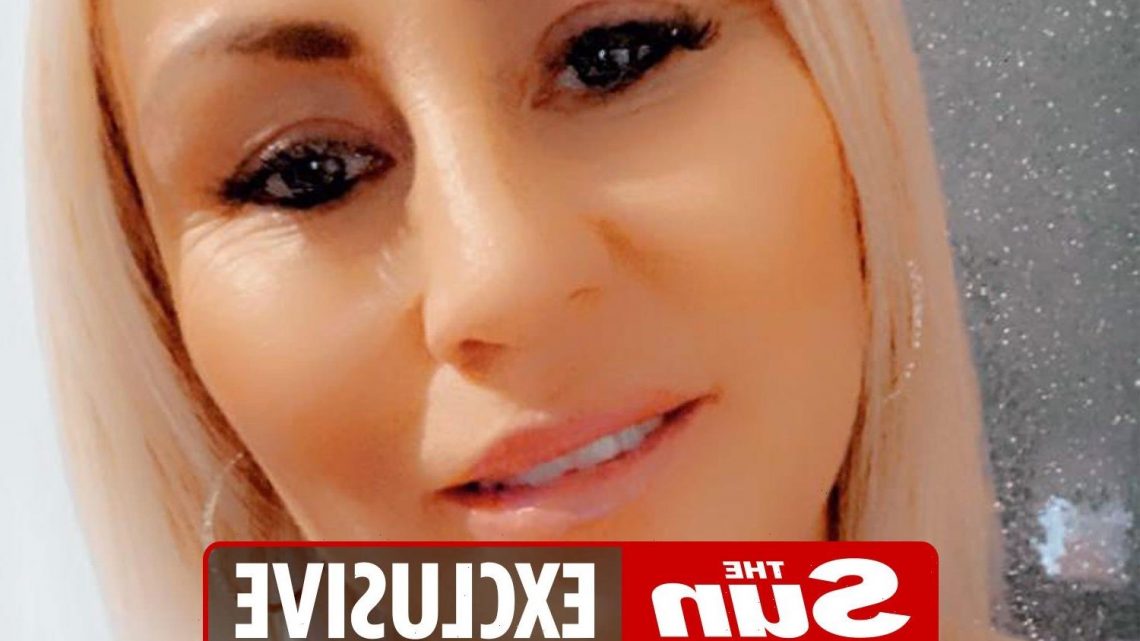 I got a mummy makeover after two kids but cut-price tummy tuck left me with a gaping, pus-filled hole in my belly

A MUM of two has revealed how her surgery to get rid of her "mummy tummy" left her with a huge gaping hole in her stomach.

Joanne Hines, 35, from Manchester, was left with a seeping, pus-filled wound after a £3,000 botched tummy tuck. 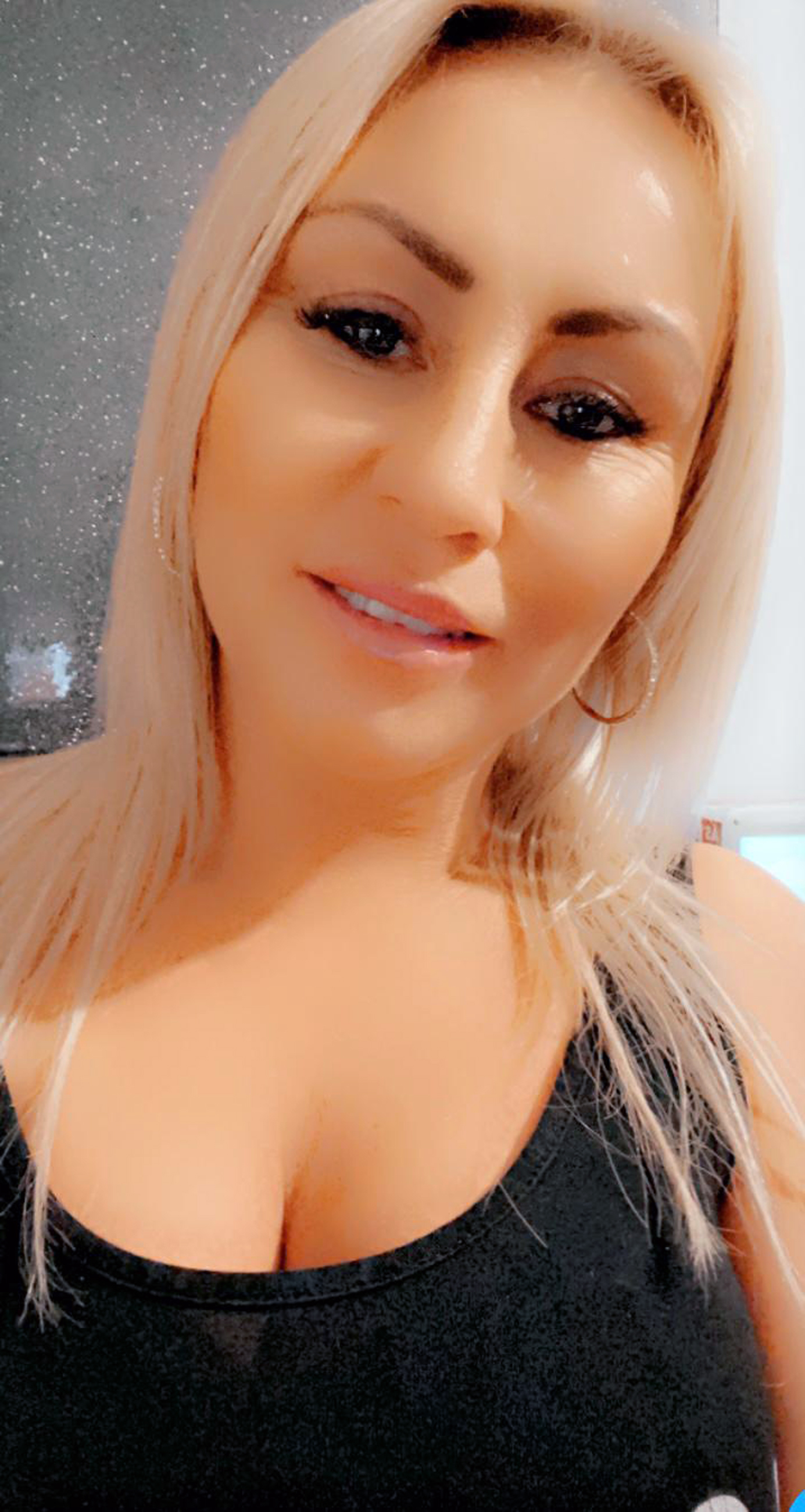 Now, the stay-at-home mum is left with a five-inch scar and is speaking out to urge women to be aware of the dangers of plastic surgery.

Joanne said: “I wish I had never had the tummy tuck. At first, the cheap surgery seemed like a good deal. Instead, I paid a very high price.

"Please research extensively before thinking about surgery. I might not have been left with this massive scar had I not been so hasty.”

After giving birth to her second child, Elouisa-Rose, now two, Joanne despised the saggy stomach she gained as a result. 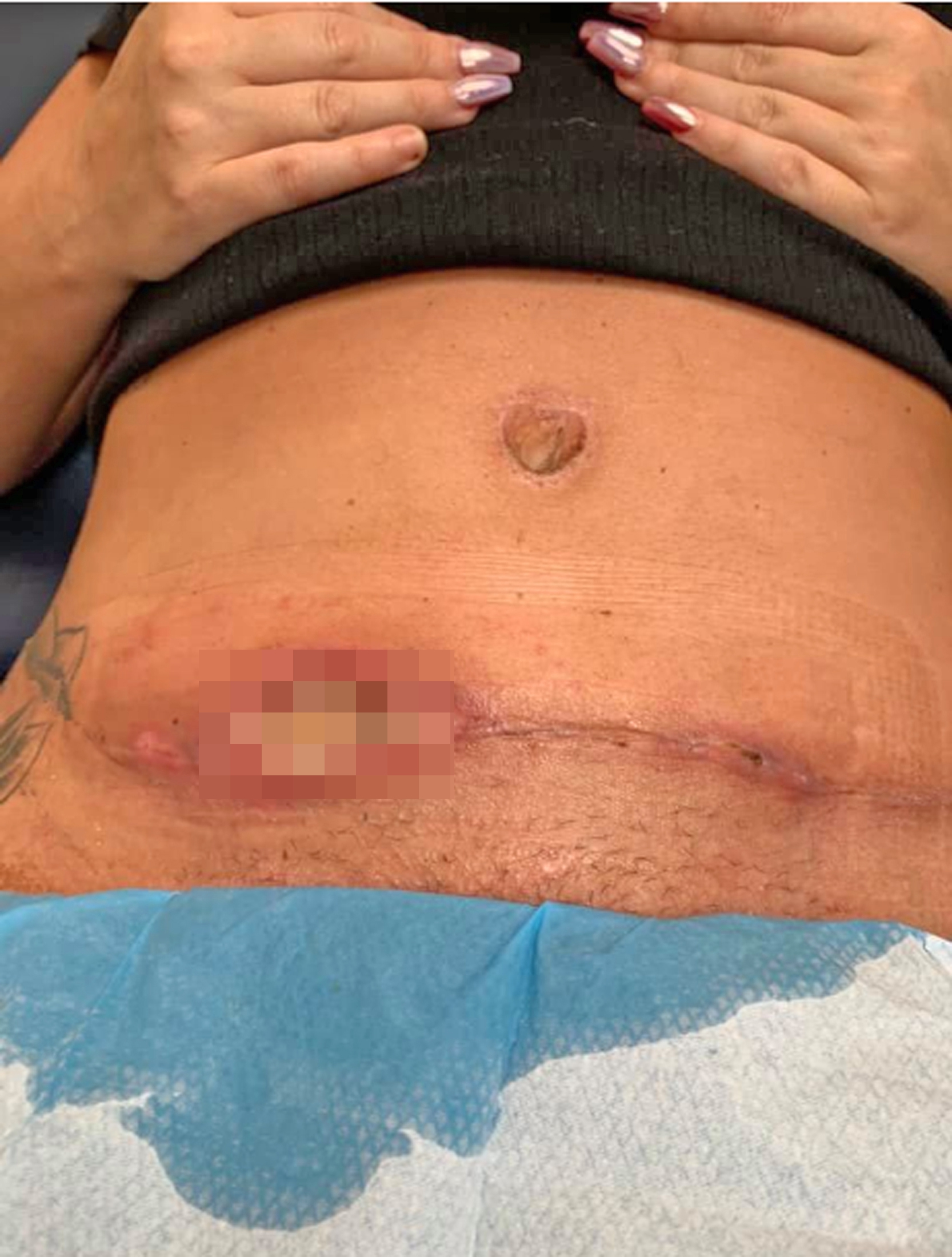 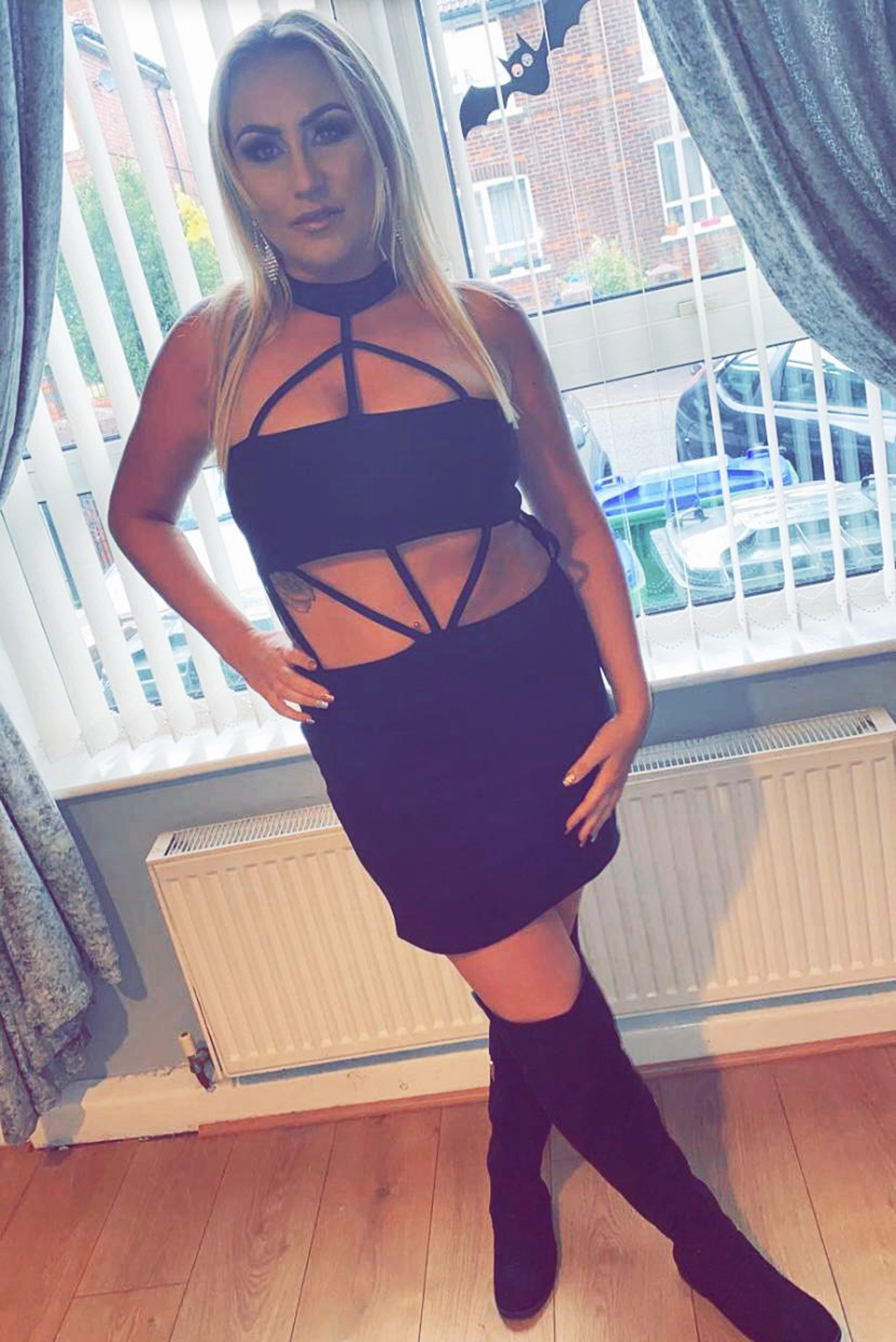 She said: “After giving birth to my first child, Ashton, now 16, I managed to bounce back to my previous weight. But with Elouisa-Rose, it was different.

"I did hours of exercise but nothing would give me back my pre-birth body. Weighing 12 stone and a size 14, I was the heaviest I’d been in my life. I felt very self-conscious as I was always ‘the slim one’.”

Then, in January 2019, Joanne spoke to a friend who had recently undergone a tummy tuck.

“She told me the surgeon had botched her belly button and warned me against having the surgery, but I shrugged it off because I read that it was incredibly rare," Joanne admitted.

“I did a bit of research on the surgeon and found glowing reviews to satisfy me."

My heart sank when the nurse peeled off the bandages, revealing a gaping wound and two tubes attached, oozing blood and fluids

Despite warnings from her friend and sister, Joanne booked an appointment at the clinic later that day and was told they would discount the op by £500 if she didn’t stay overnight.

She continued: “Always one to take up a bargain, I agreed. I felt safe enough as it was in the UK. I convinced myself everything would be fine. I dipped into my savings and forked out the £3,000 for the surgery.”

“I was in agony, but I couldn’t wait to see my new stomach," she recalled. 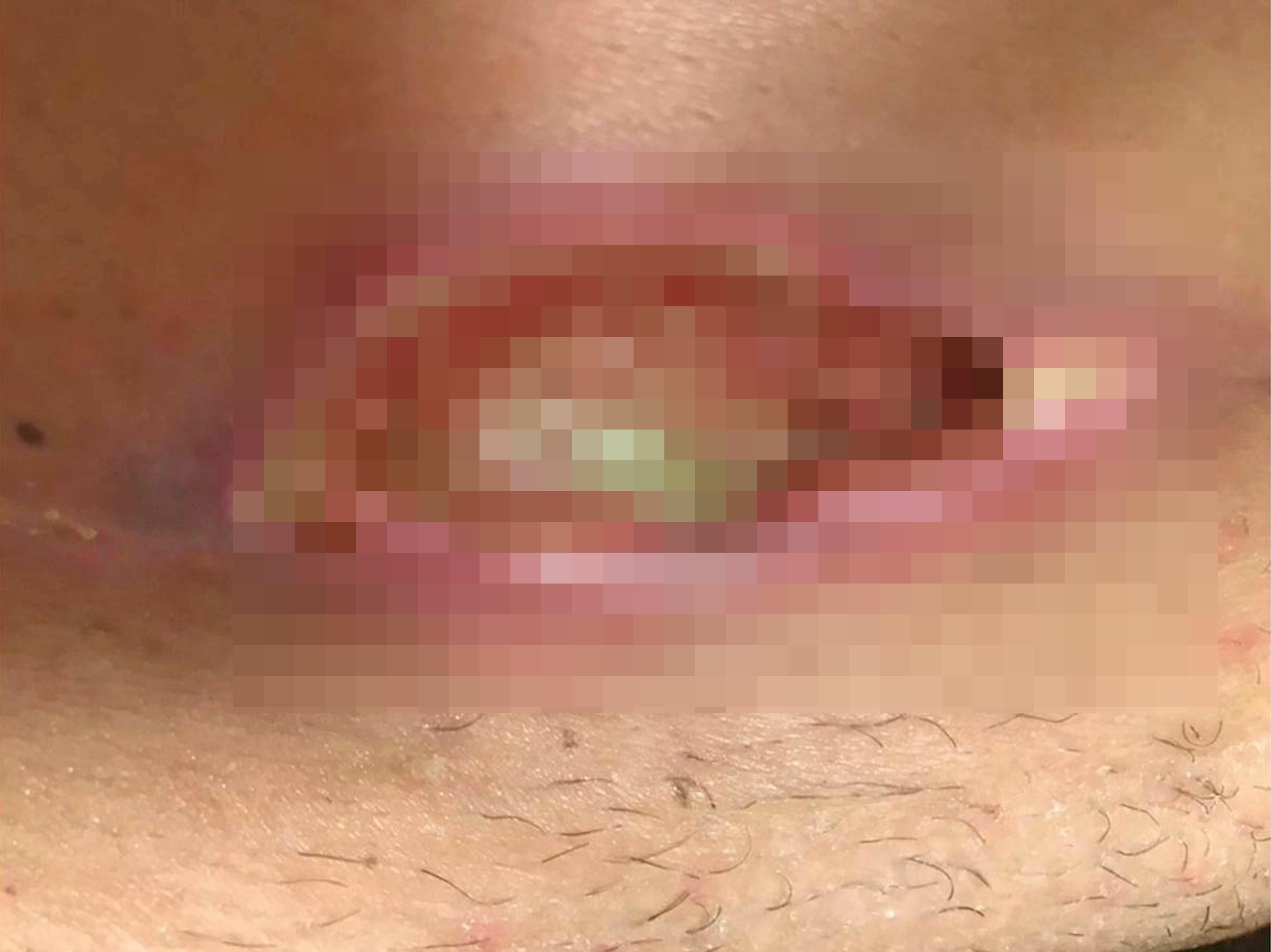 “My heart sank when the nurse peeled off the bandages, revealing a gaping wound and two tubes attached, oozing blood and fluids.

“I was quickly assured by the nurse there was nothing to worry about. As I had taken the £500 discount, I was discharged, despite still being in incredible pain."

Back at home, Joanne continued taking painkillers and cleaned the wound three times a day. But five days later, she noticed the wound had turned green.

She said: “I rushed over to the clinic in tears. But the surgeon just brushed off my concerns and told me everything was fine.”

Every time I saw the exposed wound, I felt sick," she said. “And it wasn’t just physical reactions I had, my mental health was hit badly too. I started having panic attacks

Over the next two weeks, Joanne couldn’t walk and was in excruciating pain. Three weeks post-surgery, the wound burst open.

Joanne revealed: “I was completely freaking out. There was a massive hole in my stomach. I constantly tried to phone the surgeon but he stopped taking my calls.”

Eventually, Joanne had enough and her sister, Lisa drove her to Wythenshawe Hospital. The doctors told her that the wound was badly infected and that she needed to take antibiotics.

Over the next couple of months, Joanne visited her GP once a week so they could pack her dressing.

“Every time I saw the exposed wound, I felt sick," she said. 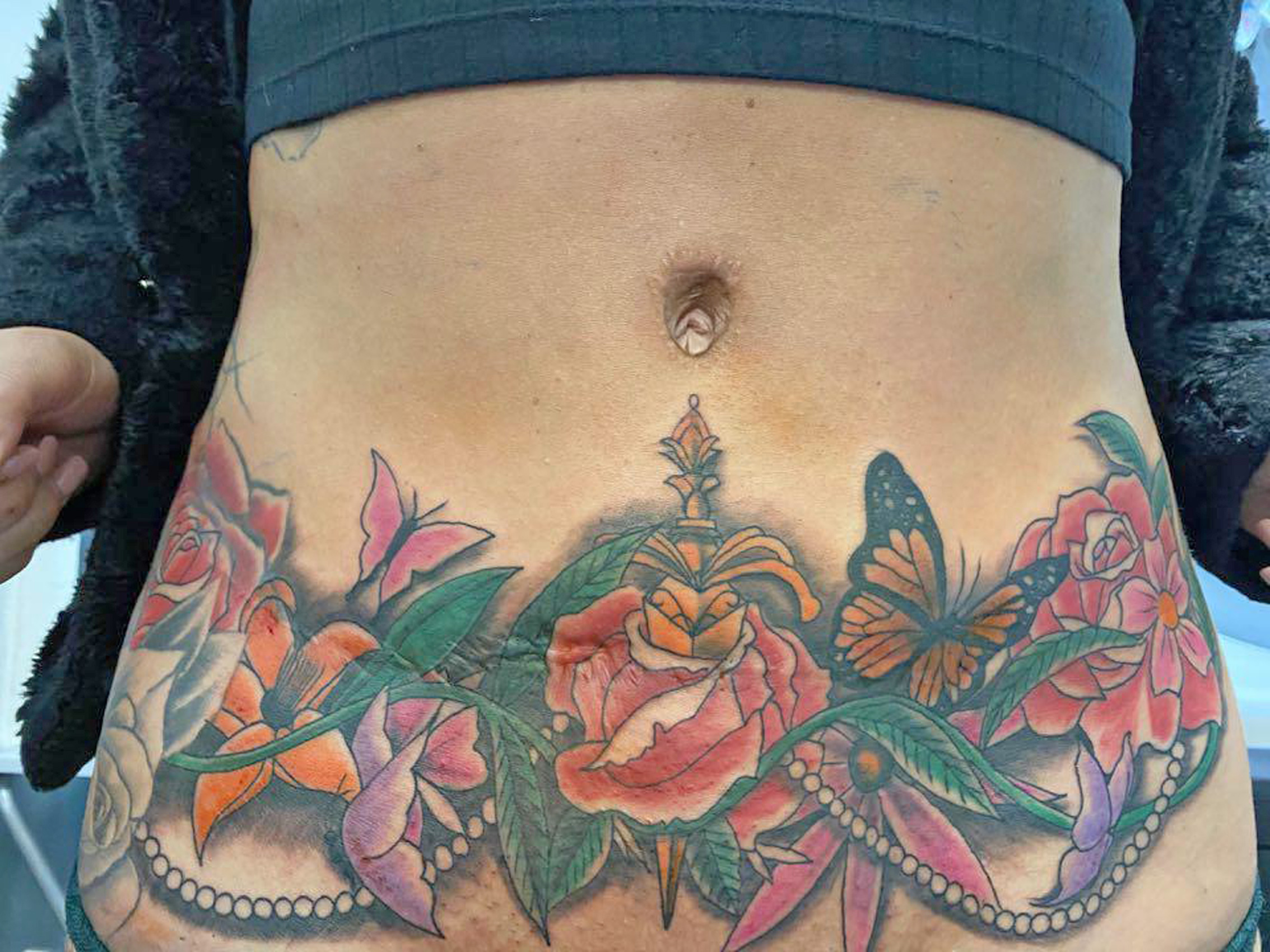 How to have cosmetic surgery safely

The NHS advises thoroughly researching into the procedure you’re having done and the surgeon in order to ensure it is safe to go ahead.

Here's the guidelines they recommend following:

According to the NHS, it should cost on average between £4,500 – £6,000 to have abdominoplasty surgery (tummy tuck) in the UK – that includes cost of any consultations or after care.

“And it wasn’t just physical reactions I had, my mental health was hit badly too. I started having panic attacks. I thought I might die. It was such an awful experience.”

Ten weeks later, in August 2019, the wound healed but Joanne was left with a five-inch scar across her stomach.

“I felt hideous and I cried every time I looked in the mirror," she said.

“I refused to wear bikinis again and opted instead for baggy tops that would hide my stomach. Eventually I ended up having to get a tattoo to hide it, so I now have pretty pink and orange flowers where my scar once showed."

“If only I had listened to my sister and friend, I would never have been in this position," she admitted.

"Please think carefully before going for any major surgery. This cheap tummy tuck seemed like a good idea, but I paid a high price.

"I never thought I would end up being one of the unlucky ones.”

Meanwhile, meet the world's hottest gran who stunned fans by downing shots in Las Vegas on her birthday.

Plus, one woman reveals she dumped her man and her best friend because her star sign told her to – and she admits it was a huge mistake.

And a 78-year-old woman who has been divorced SIX times reveals she met the love life of her while penniless at a bus stop and he's now husband no 7.