The fashion label of Henry Holland, the designer famous for his rhyming T-shirts bearing slogans such as “I’ll Tell You Who’s Boss Kate Moss” and “Let’s breed Bella Hadid”, promoted by celebrity friends including the former model Agyness Deyn, has called in administrators.

East London-based House of Holland, which previously produced special collections for Debenhams and Habitat, has been searching for investors after struggling from what it said were “difficult trading pressures”. Holland’s decade-long collaboration with Debenhams is understood to have come to an end last year and before the department store itself calling in administrators.

Will Wright, a partner at KPMG and the joint administrator, said: “House of Holland rose to prominence as a forward-thinking British label, with its signature slogan t-shirts and collaborations with a number of high street brands. However, with apparel experiencing the same difficult trading pressures as others across the UK retail market, the company needed to raise additional investment in order for it to continue.”

How the humble T-shirt became a fashion statement

Administrators plan for the business to carry on trading via the House of Holland website while they attempt to secure new investment that could protect the future of the brand. Holland stepped down as the creative director of the business last month.

House of Holland started in 2008 as a Paypal link on the Myspace page of Holland, then a fashion editor for teen magazines. He gained fame with a range of “fashion groupie” T-shirts with slogans such as “Let’s play naked Twister Linda Evangelista”. The range was modelled by his then housemate Deyn, who became one of the it models of the decade. 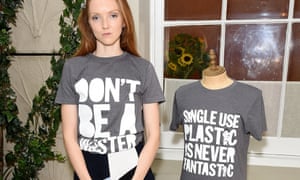 Holland met Deyn when he was still a schoolboy living in Ramsbottom, Lancashire, and they became part of a celebrity group of friends including Alexa Chung, Daisy Lowe and Nick Grimshaw.

The House of Holland brand is sold worldwide in department stores including Selfridges and on sites such as Net-a-Porter.

House of Holland’s difficulties come amid challenging times for fashion businesses hit by rising costs and consumers switching to spending on experiences such as eating out or holidays.

Department stores, a key outlet for designer labels, have come under particular pressure with both Debenhams and House of Fraser closing stores in the past 18 months, despite being rescued from administration. Beales went into administration in January putting 22 stores and 1,300 jobs at risk.

Starbucks to Stop Filling Reusable Cups Amid Coronavirus Fears
Gone But Never Forgotten: The Celebrity Pets We Lost in 2020
Entertainment