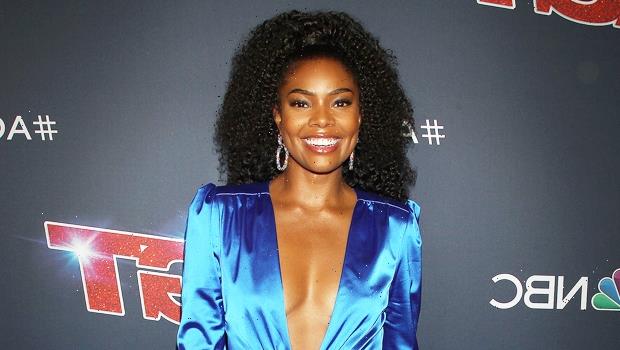 Gabrielle Union is a beauty! The 48-year-old stunned in her latest photo wearing just her Calvin Klein Underwear as she posed for husband  Dwyane Wade, 39. “Mama G,” she captioned the snap, including a black heart along with tags for Calvin Klein, designer Heron Preston and her Dwyane. Seated on a bathroom counter, Gabrielle candidly looked off to the side as she modeled Heron Preston’s new collaboration with the iconic American label. She specifically wore a white sports bra, underwear and branded socks from the line, which launches on Friday, April 23.

The Bring It On alum kept her hair styled in two playful french braids by her go-to hair guru Larry Sims (recently, Gabrielle and Larry partnered up to launch Flawless By Gabrielle Union in 2017, which is a new “moisture-rich” haircare collection for textured hair). She also gave a shoutout to her makeup artist Malika James for her effortless bronzy glow! “She aging backwards,” one fan commented, while others added, “perfection” and “you look amazing!”

The “Mama G” comment, was, of course, a nod to her kids: Gabrielle is a proud mama to adorable daughter Kaavia James, 2, and step mom to Dwyane’s kids Zaire, 19, Zaya, 13, and Xavier, 7. Thanks to her parents’ social media, Kaavia has become a star in her own right on Instagram! The toddler is known for her hilarious reactions and facial expressions, and didn’t fail to deliver in Gabrielle’s TikTok video posted on April 16.

Rocking a shirt with dad’s name, Kaavia hilariously had no time for the viral “patience” challenge that Kylie Jenner’s daughter Stormi Webster nailed last year. “Wait until I come back,” Kaavia was instructed, as she began snacking on her Bitsy’s crackers (another company founded by mom Gabrielle). “@kaaviajames is consistent. 1 year later and ain’t nan thing changed,” Gabrielle hilariously wrote in the caption. “I cant stop watching this. It’s been a tough couple weeks… a timeline cleanser…Love & Light good people,” Gabrielle added.

Celebrities and fashion mavens have been counting down to the release of the highly anticipated Heron Preston x Calvin Klein launch, which is also set to include a full range of denim and clothing. “I’ve been secretly working with Calvin Klein for 1 year now. Today marks the launch of our creative partnership,” Heron wrote in an announcement on April 3. Shortly after, a new campaign fronted by Cindy Crawford‘s daughter Kaia Gerber, 19, was released to promote the line of elevated basics, along with Ashley Graham, Nas, Lil Uzi and more. “We made it, and I’m so excited to see this project finally come to life and launch it with the world,” Heron said in a press conference. Prices for the collection are set to range from $138 to $298 for sweatshirts and hoodies, $185 to $225 for denim, $36 to $88 for underwear.

Sarah Michelle Gellar, 44, Rocks A Swimsuit To ‘Relax’ In The Pool On ‘Me Time’ Getaway

Is a 'Felicity' reboot in the works? Star Scott Foley weighs in
Entertainment