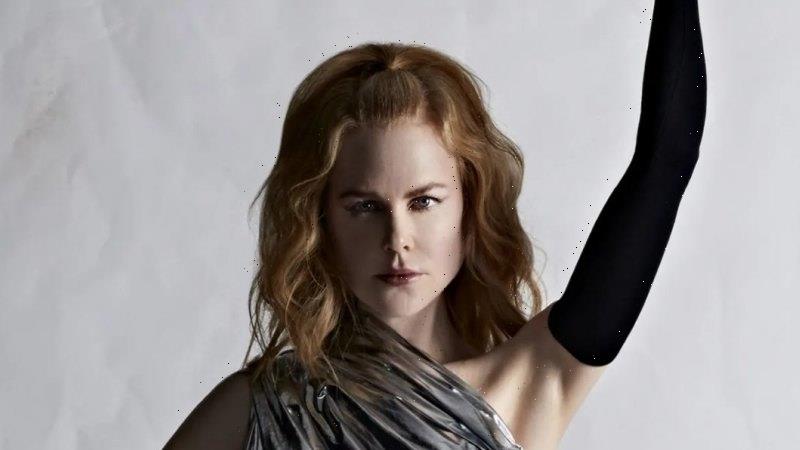 The non-famous remained on the street. 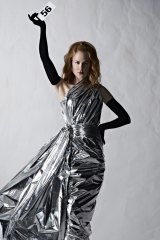 Kardashian’s runway appearance was the least surprising, with the reality star having appeared in campaigns for Balenciaga and famously wore the revitalised label, mask included, to last year’s Met Gala. It was when Kidman loped around the corner in a one-shouldered silver gown, dragging a heavy train and wearing black opera gloves that members of the front row gasped.

Even with Kidman’s country-singer husband Keith Urban in the front row, a celebrity stylist who works with Zendaya and Celine Dion was seen clutching imaginary pearls in surprise when Kidman turned the corner inside Balenciaga’s Paris salon.

This was a new role for the regular Vogue cover star, who first captured the attention of Australians while modelling in the pages of Dolly magazine.

The show began with faceless models in the skin-clinging neoprene bodysuits that the Kardashians gravitate towards, before moving into Demna’s normcore staples of denim jackets, hoodies and parkas but reached its climax when the designer gave himself over to celebrity and glamour.

Supermodel Bella Hadid tried to hold her own against her famous competition but only Naomi Campbell, her immediately recognisable sculpted face emerging from a shiny black funnel bodice above a voluminous skirt, could muster enough star power to defend her profession.

The event felt like a shift in the world of haute couture, where the finely-crafted clothes are only relevant to the extremely wealthy. Balenciaga is owned by the French luxury conglomerate Kering, which has decided all shows are an opportunity to provide fashion entertainment and lure customers to more affordable ready-to-wear and $109.99 fragrances from Chemist Warehouse.

Demna, who started at Balenciaga in 2015, and Daniel Roseberry who delivered an exquisite collection made for the Hollywood red carpet at Schiaparelli earlier in the week, understand this new era innately.

“What Demna is doing with Balenciaga couture is making it really relevant now,” make-up artist Inge Gronard told Vogue. “There were pieces based on the past, but he gives it that touch of now.”

It is the same stab at relevance that has been applied to the show’s venue, at the renovated original location of Cristóbal Balenciaga’s haute couture studio, 10 Avenue George V, Paris. 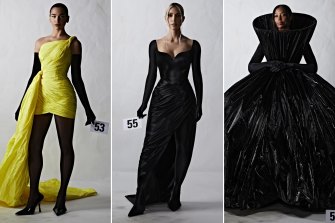 “The concept of the couture store is a gateway to couture, which remains a very closed universe, especially for new generations,” says Cédric Charbit, chief executive, Balenciaga. “In this new store, products, made to measure services and retail excellence are a reinvention of the Balenciaga client experience. It is exciting to be able to present this level of craft, creativity and made-in-France savoir-faire in our historical address.”

The couture house closed its doors in 1968 when in the face of Mary Quant mini-skirts and Biba fast fashion, its founder decided that times had changed too greatly. Balenciaga’s favourite client, the extremely wealthy Mona Von Bismarck, who once ordered 150 pieces when parts of her wardrobe were lost in a train accident, locked herself away in her Capri villa to cry for three days.

This time the only tears were from the screaming fans outside the show, who Balenciaga executives are counting on to keep the newly polished doors open for decades to come.