Home » Fashion » For Two Cloggers, 20 Years to Get in Step and Get Married 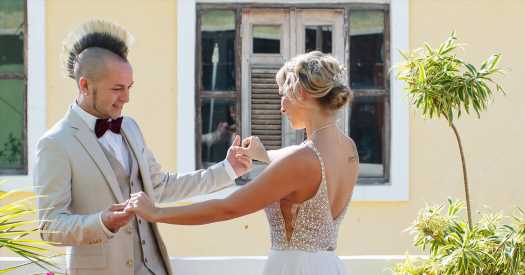 For Two Cloggers, 20 Years to Get in Step and Get Married

Stephanie Goodman was in her early teens when she declared, “I’m going to marry Mark Clifford someday.”

Her friend and teammate Whitney Braswell remembers it well.

“We were in middle school and Mark was this cool, older, college guy, and she was totally in love with him,” Ms. Braswell said.

Spoiler alert: Ms. Goodman knew of what she spoke. Her adolescent crush would actually stick, though it would take more than 20 years.

Ms. Goodman, now 35, was 12 when she saw Mr. Clifford perform for the first time. They both were competitive cloggers, a style of folk dancing. In the United States, clogging originated in Appalachia. And while it can look like tap dancing to the untrained eye, there are differences, though now there is much more crossover between the two forms. Clog dancing takes influences from Wales, Irish line, African folk and square dance. Despite its name, it’s not performed in clogs in the United States. While in its early years it was performed to fiddle and banjo, now routines are regularly choreographed to pop and hip-hop.

Mr. Clifford, now 44, is well-known throughout the clogging world and beyond. He founded an all-male clogging troupe called All That! The troupe competed in two seasons on NBC’s “America’s Got Talent,” coming in second place during Season 1, and has performed at the Macy’s Thanksgiving Day Parade and internationally. Four members of All That!, including Mr. Clifford, perform six nights a week in a variety show at the Carolina Opry: Calvin Gilmore Theater in Myrtle Beach, S.C., where Mr. Clifford and Ms. Goodman now live. (The show took a monthslong hiatus during the pandemic shutdown but then returned and is currently on winter break.) The troupe also does corporate functions and cruise ship gigs, too.

Mr. Clifford is the youngest of three children of the late Vincent Clifford and Marie Clifford who lived in Charleston, S.C. where his father was based; Vincent Clifford spent 26 years in the Navy, and then worked in real estate.

Marie Clifford had been a tap dancer, so when her son showed an interest in clogging, she encouraged him.

“I was into drums and liked the sound your feet made with it,” said Mr. Clifford, who was first inspired by seeing older boys doing it.

He was only 5 when he began clogging, and at age 6, he began karate lessons. A quick study in both, he realized how martial arts informed the fluidity of his movements in dance and vice versa. By the time he was 8, he was on his way to being a child star in the competitive clogging world. Not so academically-minded, Mr. Clifford put all of his focus in both clogging and karate. (He is also a third-degree brown belt, just short of a black belt.) His nonschool hours were taken up by competitions and the travel they require.

“It just came really naturally to me,” Mr. Clifford said. “When I dance, I feel like a spinning top, flowing across the floor.” 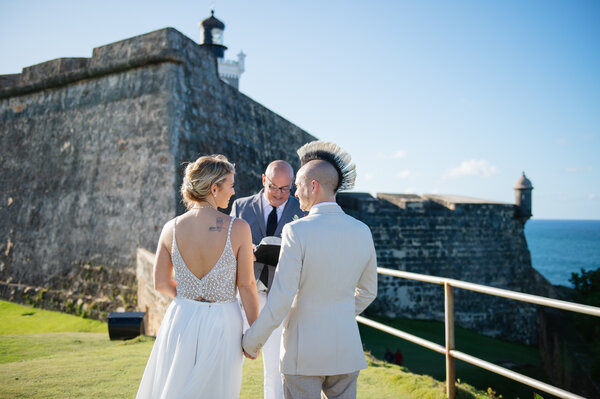 Mr. Clifford didn’t see college in his future. But then he said Mars Hill College near Asheville, N.C., offered him a clogging scholarship to lead their team, the Bailey Mountain Cloggers. He graduated with a degree in corporate communications and then turned pro, teaching and making instructional videos, and founding the troupe.

Ms. Goodman began clogging at age 10. She and her brother are the children of Barry Goodman, who served in the Army’s 82nd Airborne Division and worked in furniture upholstery, and Donna Goodman, who grew up on a small farm in Granite Falls, N.C. The family were regulars at Sims Country Bar-B-Que, a restaurant and live music venue with a large dance floor in Granite Falls.

Soon they joined a team: the Sims Country Cloggers. “My mom and I danced on a lot of stages together,” said Ms. Goodman, who went on to compete in clogging in the Junior Olympics, in 2002 and 2003.

“I didn’t do any other extracurricular activities in school,” she said. “Like any sport, if it’s your passion, you are constantly going to rehearsals, and then practicing on your own time, too.”

In those early days, at competitions, Ms. Goodman would record the men’s solo division on the family camcorder, Mr. Clifford in particular.

When Ms. Goodman was 15, she shyly asked Mr. Clifford for his autograph; she has a photo of them together from that exchange.

In 2003, Mr. Clifford taught a master class for Ms. Goodman’s team. She was now 19, he 28, and while he remembered her as one of the young cloggers with the camera, he couldn’t help but notice her beauty. He asked her out.

Although she had waited years for this moment, he was her celebrity crush, not someone you go out with in real life. She turned him down.

“I chickened out,” she said. “I was really intimidated.”

While she instantly regretted it, in hindsight, Ms. Goodman now says, “We both had a lot of growing up to do. Our stars hadn’t aligned just yet.”

In the coming years, they each met someone, got married, and then divorced.

In 2011, they friended each other on Facebook. It was a social media friendship with little interaction. She always wished him well before he was going on television, for example, but nothing more than that.

Finally, in 2012, despite still harboring the memory of being rejected by her years earlier, Mr. Clifford once again asked her out. This time, Ms. Goodman, now retired from clogging and living in her hometown, didn’t balk.

On their first date, they had dinner, and strolled around Myrtle Beach’s Grande Dunes Marina. “The second we got together, it was like we were old friends, or were together in another lifetime,” Ms. Goodman said. “It was like ‘oh, there you are.’”

After a few dates, Ms. Goodman moved to Myrtle Beach.

“I wasn’t really surprised, I thought it was sweet,” said Ms. Braswell, the former teammate of Ms. Goodman’s. “He makes her incredibly happy and he’s really encouraged her to pursue her own dreams, too.”

They soon moved in together, first into an apartment, and then, later, bought a home. They got a dog and three cats.

But Mr. Clifford’s divorce had left him wary of marriage.

“Let’s be independent together,” was how he phrased it.

“We had a great life and I felt fulfilled,” Ms. Goodman said, “so I didn’t want to pressure him.”

But as the years went by, Mr. Clifford found himself changing his tune.

In August 2020, he suggested they go out to dinner for the first time since the shutdown. They ate at the same restaurant as they did on their first date, and once again, strolled along the marina. This time, he proposed with a custom-made ring.

As they looked at dates and venues for a small wedding, nothing about planning it was easy.

“Things just usually align with us,” said Mr. Clifford. “And the wedding wasn’t happening like that.”

They had been on a cruise in January, 2020, and had fallen in love with Puerto Rico. With the blessing of their families, they decided to elope. They settled on the date Jan. 21, 2021, and when Mr. Clifford scrolled through past photos on his phone, he saw they had been in San Juan on that exact date the year before.

So on that date, they were married by Tim Blackford of Peace Love Weddings and a Universal Life Life minister, while standing outside the walls of the Castillo San Felipe del Morro citadel in San Juan.

“He’ll go to every extreme to make me happy and do anything for me,” said Ms. Goodman, who is taking Mr. Clifford’s name. She recently completed a certificate in cybersecurity and is in a yoga-teacher training program.

“He’s a master of grand gestures,” she said. “But at the end of the day when it’s just us, even when he’s seen me at my absolute worst, he loves me for me.”

Where At the Castillo San Felipe del Morro citadel in San Juan.

The Wedding The couple had a ceremony with Bible verses woven in as friends and family watched on Facebook. The only live guest was an iguana that wandered by. After they were pronounced married, onlookers let out a cheer.

The Reception After the ceremony, the couple took a stroll through San Juan’s Old Town and then went out for tacos.