Douglas Smith, a Star of ‘Big Little Lies,’ Surfs in His Boxers

Douglas Smith angled his brash yellow board into the wave and rode toward the Far Rockaway shore in Queens, before the crest crumpled into foam and he tumbled into the water.

It was a gray Thursday, with Kennedy Airport-bound jets shrieking overhead and skinny clouds spitting rain. Mr. Smith, 33, who plays a modern marine biologist on the second season of “Big Little Lies” and a 19th-century detective sergeant on “The Alienist,” was stealing some much-needed surf time before flying back to Budapest, where “The Alienist” is shot.

A skin infection (cellulitis, the result of a scratched mosquito bite) had kept him out of the water for his last month at home in Los Angeles. And Budapest, which is“in a landlocked country in the Carpathian basin,” as he described it, doesn’t get a lot of groundswell.

“There are different kinds of waves there,” he said. “Euro parties. Crowd surfing. Rave waves.”

Mr. Smith, hair sun tipped, eyes sleepy, had arrived around 8:30 a.m. at Beach 69th Street, where there is a shipping container belonging to the New York Surf School, decorated with a mural of the A train riding a wave barrel.

Frank Cullen, the founder of the school, met him there and picked out a thick wet suit for him. “You’re thin so you don’t have as much body mass,” Mr. Cullen said. 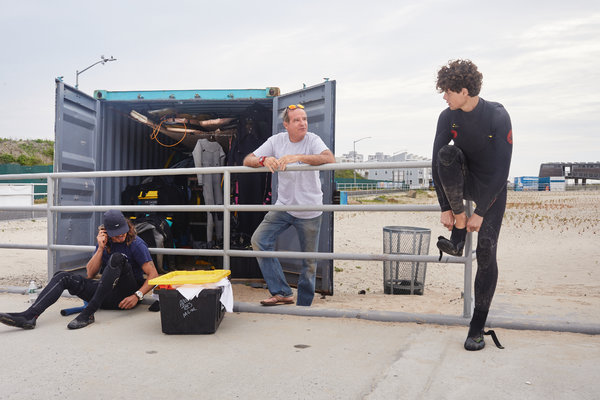 Mr. Smith stepped inside the shipping container and stripped down to his Banana Republic boxer briefs, before pulling on the borrowed wet suit. “I’m used to being naked under my wet suit, but I guess I’ll wear underwear,” he said.

Politely, dubiously, he accepted neoprene gloves and bootees (“You people and your cold-weather surfing,” he said), along with a bulky foam board that looked like a nine-foot ripe banana. Mr. Smith typically uses a short board. But the choppy waves slapping the Rockaways don’t favor short boards. “I’m very much a beginner when it comes to this environment,” he said.

This early in the season, the temperature, onshore and in the water, was just under 60 degrees, with brisk winds ruffling the beached seaweed. The waves bumping the jetty were small, two-footers, maybe.

If Mr. Smith could have walked across the water (a dull green, like the dusty bottom of a beer bottle), the waves would barely reach his knees. He didn’t mind. Larger waves scare him, he said: “My friends called me a wuss. Actually, they use a different word.”

He placed the board to the shoreline and practiced popping up from his knees to his feet. Then he plunged in. “This is good for the immune system, a cold shock,” he said, paddling out just past a jetty as foamy waves bounced him up and down.

Mr. Smith is not exactly a novice. Raised in Vancouver, British Columbia, he moved to Southern California as a teenager and learned to surf almost immediately — an attempt, he said “to not be the dorky Canadian.”

He used to wake up at 5 a.m. to dawn patrol before school, heading to the beach again in the afternoon. He still gets in the ocean pretty much every day, he said.

In “Big Little Lies,” as Corey, the not-so-neurotypical aquarium scientist who befriends Jane (played by Shailene Woodley), he does his own surf stunts. Like Corey, he has used the ocean as “a place of release and a place of just wiping away bad things in my own life.”

But the Atlantic was not cooperating. Waves dissipated before they reached him. Or picked him up only to crash him down. “It’s a little funky out there,” Mr. Cullen said, watching from the shoreline.

After about 10 minutes, Mr. Smith came out of the water to peel off the bootees. “It’s a weird feeling,” he said apologetically, before heading back in. He could barely catch a break. Mr. Cullen watched as he plummeted from the board again. “He looked good as long as you could look good,” he said. “That’s the way the wave is going to go.”

Another 15 minutes passed and Mr. Smith came back in, this time to get a shorter board, like the kind he uses back home. “It might not be enough board, but I’d like to give it a shot,” he said.

Mr. Cullen brought out another yellow board, this one 6-foot-4, an inch taller than Mr. Smith. Mr. Smith plunged back in.

The difference was immediate. Mr. Smith caught the waves more nimbly. He stood taller and rode longer. Mr. Cullen admired him from the shore. “He’s like a real surfer,” he said. “A surfer surfer.”

With a quick swivel of his hips, he turned his board into one frothy wave after the next, not seeming to feel the cold or notice the scream of the overhead jets. His hour rental nearly up, Mr. Smith dragged his board back to the beach and posed for hang-loose photos with Mr. Cullen and another instructor, Danny Nuñez.

Still in his wet suit, he hopped a ride to Boarders Surf Shop, about 20 blocks up the beach, where he had been promised a hot shower. He locked himself in a cabana, where he unzipped and unsuited. Wrapped in a thin borrowed towel, he made his way to the shower.

“It should turn hot,” Mr. Cullen told him.

“It’s warming,” Mr. Smith said, though he didn’t sound convinced. He braved it for a minute or two, then tried to dry himself with the thin towel (“a Sisyphean task,” he said.)

He emerged in most of his street clothes and tipped his sopping boxers into a trash can, “a prisoner of war of the Rockaways,” he said. Then he headed to a lunch of tacos and watermelon juice at the Rockaway Beach Surf Club.