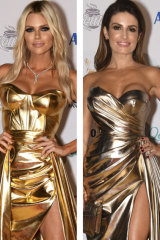 Before the blisters have even formed after another Logies night, feathers are flying as one Australian designer has been forced to deny copying another's red carpet look.

Sydney designer Steven Khalil has denied accusations from Melbourne couturier Jason Grech, who dressed Sophie Monk for Sunday's awards, of copying of his gold "Diana" dress in his design for Home and Away actress Ada Nicodemou.

A spokesman for Khalil, who is showing in Paris this week, said: "We made a custom piece for Ada and we chatted about what we wanted to achieve – the usual couture process. We had a pattern for this style and its variations for many years and tailored it to suit what our client felt was best for her event. Steven felt that Ada should have a 'Goddess' moment."

Grech made the claims in a post on his Facebook page on Monday morning, saying he had to "call this out".

"A stylist asked to borrow the Diana dress … for the Logies … I couldn’t accommodate the request because it had [Monk's] name all over it," Grech wrote.

He went on to accuse the stylist and Khalil of "replicating" his dress, which caused a social media storm after Monk was photographed in a staged shot of the dress assisted by a wind machine.

"If you’re going to replicate my work, the least you can do is make it better," Grech wrote above a side-by-side comparison of the two dresses.

Speaking after publishing the post, Grech explained the dress had been made for his show at the Virgin Australia Melbourne Fashion Festival in March, pictures of which were widely circulated on social media.

He said a stylist contacted him in April about loaning the gown for the Logies, a request Grech later denied when he decided to give the dress to Monk.

"I said I'm not sure because I said I had lots of people [who] want it, and I had to put it on the best one out of all of them," Grech said.

Grech said it should have been very clear that the Diana dress would be worn by someone at the Logies.

Grech said he contacted the stylist on Sunday night to express his disappointment but had not yet received a reply.

"I was really disappointed and I didn't expect this from him," Grech said.

Khalil will show his collection at Paris Couture Week for the first time on Monday, Paris time, joining other Australians including Toni Matiscevski and Paolo Sebastian.

Jenelle Evans Reunites With Her Children For Son’s 5th Birthday Party — And David Eason Came, Too