Home » Fashion » Brace Yourself, Zac Efron Has a Mullet Now

Brace Yourself, Zac Efron Has a Mullet Now

Zac Efron is currently living his best summer life in Australia, where the coronavirus pandemic numbers are among the lowest in the world (the entire country had just 13 new cases added yesterday). Things are so normal there that the actor went and got his hair cut at Kent Town’s Attaboy salon, and it almost looked like pre-pandemic times. He posed with the salon’s staff and now is rocking a mullet…well, the start of one, at least.

As Attaboy wrote on its Instagram, “@zacefron dropped into @attaboy_hair Kent Town for a tidy up today, so we gave him a mullet 😂 He also gave the boss man, Robby, a trim—and made him feel 17 again 🤦🏼‍♂️” 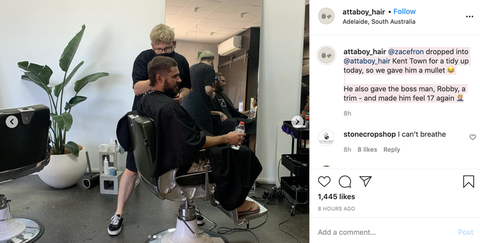 Efron has been living in Australia throughout the pandemic. He fell in love there with new 25-year-old girlfriend Vanessa Valladares. Despite breakup rumors in November, the two were photographed out together in early December, seemingly shutting down talk that their relationship is over.

“He absolutely loves Australia,” Sandilands said. “Well, he’s in love with this girl Vanessa. They’re lovely. Beautiful couple. They do everything together. They’re just really sweet, and they’re lovely.”

People additionally reported that Efron was house-hunting in the country and is very committed to Valladares. “Zac and Vanessa are very happy,” a source told the outlet in October. “They celebrated Zac’s birthday with friends before the weekend. Their relationship is very serious. Vanessa lives with Zac in Byron Bay.”