A BLOKE has left people in hysterics after he bought his girlfriend a pair of goalie gloves for Christmas because “she’s a keeper” – but she is less than amused.

The photo of the “lucky” girl recently resurfaced on Reddit seeing her posing with her new football equipment, and with a face like thunder. 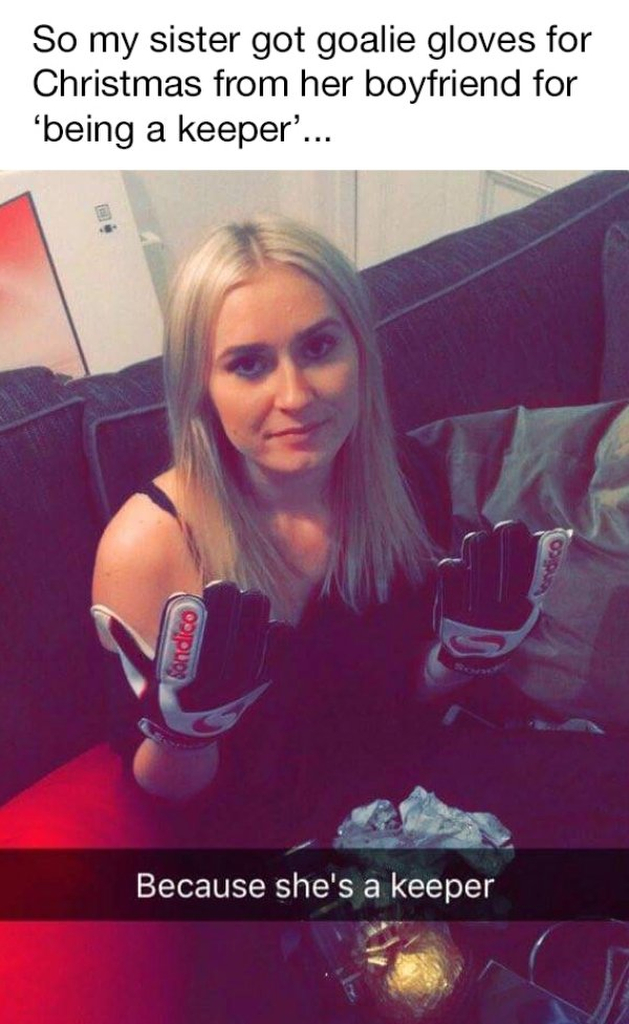 The sister of the woman, who posted the snap, wrote: “So my sister got goalie gloves for christmas from her boyfriend for 'being a keeper'.”

Fellow redditors were left in hysterics with the image being shared over 12,000 times on Imgur, however, some admitted they felt sorry for the long-suffering woman.

Commenting on the post, one wrote: “She looks used to disappointment.”

“Nothing says love like a pun and a gift he gets to use” joked another, while a third added, “She doesn't seem too happy about it. I guess her boyfriend scored though.”

The woman’s sister later revealed that the boyfriend had stepped up with his other gifts – although they were also footie themed.

Updating Reddit, she wrote: “He got her trainers… (he literally wants a footballer for a girlfriend) and a holiday to Verona. Only slightly jealous.”

In other relationship news, this mum was slammed for wanting to return her Christmas gift from her husband while he's at work.

And this ungrateful woman returned a ‘cheap’ £2,200 engagement ring because groom didn’t spend 10% of his wage on it.

Plus this bride-to-be was slammed for taking out her phone to upload a photo of her engagement ring BEFORE saying yes.

Home and Away star Johnny Ruffo goes through cancer treatment