IT goes without saying that you probably shouldn't rush into getting a tattoo – after all, it's something that'll be on your body forever.

With this in mind, one bloke decided to ask his mum's advice before committing to his first ever inking – and then took her answer a bit too seriously.

Posting the hilarious images on Reddit, the man started by messaging his mum: "Gonna get a tattoo today, what should I get?"

As he wasn't certain what he wanted, the bloke's mum tried to convince him to think about it for a while longer.

"If you don't have need for one, don't get it," she replied. "Tattoos are for something important."

But rather than following her advice, the man decided to get these wise words inked on his arm forever. 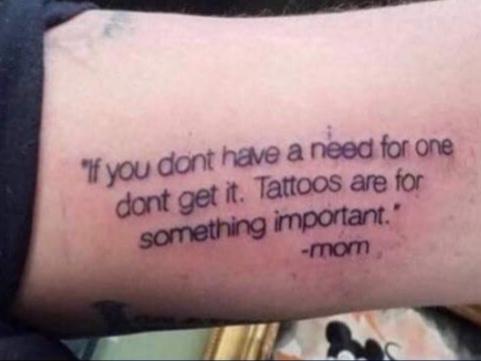 After attributing the quote to his mum, the bloke captioned the post: "Mom knows best!"

Needless to say, the questionable tattoo left other members of the forum in hysterics.

Taking issue with the mum's advice, another added: "People act like every tattoo needs to mean something very'd e e p'."

"This is incredible," a third wrote.

For more body art fails, this devastated cat owner got tattoo tribute to her dead pet… but things get even worse when she realises what it looks like.

And from misspellings, mistakes to typos, we took a look back at the worst ever tattoo fails the internet has to offer.

Plus this woman was devastated by a huge mistake in the tattoo she got to honour her late mum.