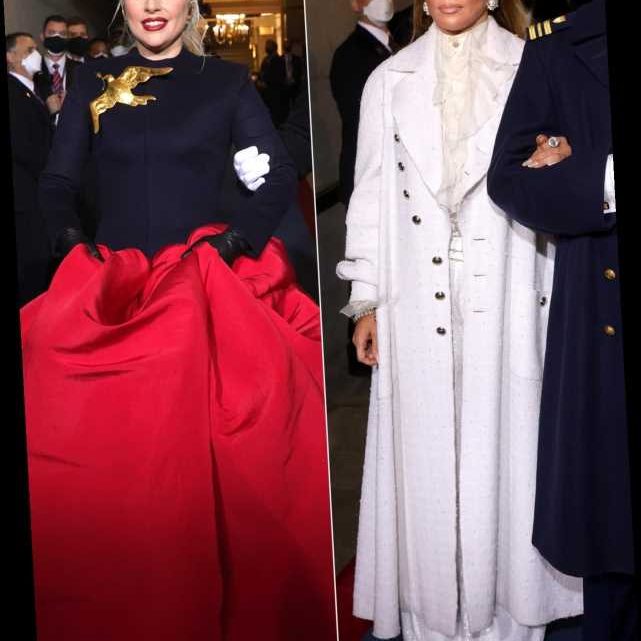 During Wednesday's Inauguration Day, Lady Gaga and Jennifer Lopez performed the National Anthem and the Star-Spangled Banner, respectively, after Joe Biden was sworn in as the 46th President of the United States. And as expected, both women took the stage in breathtakingly beautiful looks worthy of the historic occasion.

Gaga, 34, stunned in a custom Schiaparelli navy structured fitted jacket adorned with a gold chest brooch of a dove holding an olive branch in its beak. The ensemble also featured a silk ballgown skirt in a contrasting red hue. The Oscar-and Grammy-winning star styled her blonde hair in a Dutch braid with a ribbon to reveal gold olive branch ear cuff accessories and completed the Inauguration Day look with black gloves and a striking berry-toned lipstick.

"As an American living in Paris, this ensemble is a love letter to the country I miss so dearly and to a performer whose artistry I have so long admired," Schiaparelli Artistic Director Daniel Roseberry said of the look in a statement. Last week, the official Biden Inaugural Committee announced on Twitter that both Gaga and Lopez would be featured during the ceremony.

"The #InaugurationDay ceremony lineup is here! 🥳," the tweet read, going on to share a list of names that noted Gaga, 34, would sing the national anthem and Lopez, 51, would put on a musical performance.

The rest of the list revealed that Father Leo O'Donovan would offer an invocation, Andrea Hall would lead the Pledge of Allegiance, Amanda Gorman would perform a poetry reading and Reverend Dr. Silvester Beaman would lead a benediction.

Lopez celebrated the news on her Twitter account, sharing a photo of herself with the announcement alongside red, white and blue heart emojis and the hashtag, "#Inauguration2021."

Added Gaga in the caption of a photo that showed her wearing a shirt emblazoned with the word "JOE" inside a heart, "I am deeply honored to be joining @BidenInaugural on January 20 to sing the National Anthem and celebrate the historic inauguration of @JoeBiden and @KamalaHarris! 💙"

Both Lopez and Gaga (real name: Stefani Germanotta) previously spoke up during the 2020 presidential election season, with the "In the Morning" hitmaker and her beau, Alex Rodriguez, officially endorsing Biden last October. Gaga also campaigned for Biden and encouraged people to vote.

"For me, it's [about] unifying the nation again, getting rid of this hate," Lopez said in part during a video chat with the now-president-elect and his wife, Dr. Jill Biden. "I hate thinking about my kids walking around in a world where it's okay to be racist or prejudiced because our administration says it's okay."

That same month, Gaga released what she jokingly called her "new single" in a video she shared on her Twitter account — all in the name of getting fans to the polls.

The Grammy winner was also previously open about her support for Democratic candidate Hillary Clinton in the 2016 election, and has teamed up with Biden in the past to help set up trauma centers for survivors of sexual assault.