It’s been only 16 months since Zendaya took her final bow on the Disney Channel, but her new HBO series, “Euphoria,” makes one thing clear: The parent-approved portion of her TV career is already ancient history.

In the series, debuting Sunday, Zendaya stars as Rue, a high school junior committed to numbing herself with vodka and whatever drugs she can get her hands on, after a failed stint in rehab. Between bouts of unconsciousness, she narrates a dark, graphically-depicted world in which the local dealers have barely hit puberty, fentanyl is rampant and her classmates’ sex is not only casual, but frequently documented. “It’s 2019: Nudes are the currency of love,” Rue explains in the first episode.

“It’s a scary jump,” Zendaya said of the show. “But I think it was time for me to do this.” 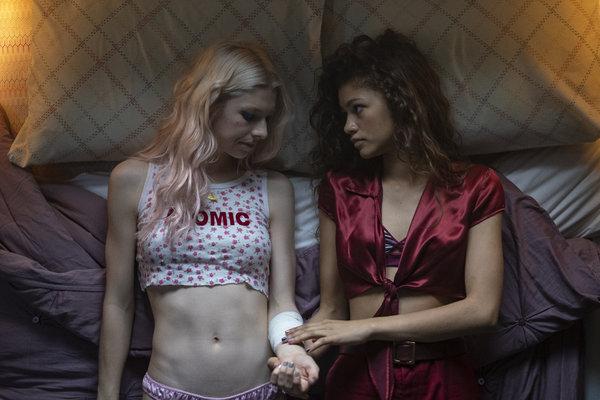 She is confident the “Euphoria” audience is unlikely to overlap with Disney’s target demographic. “I don’t think any of my 8-year-old fans know” that this show exists, she said, smiling. “If they do, I don’t think their parents will let them watch it.”

Born in Oakland to schoolteacher parents, Zendaya (last name Coleman) landed her first Disney gig in 2010 at age 13. When she wasn’t playing an aspiring dancer on “Shake It Up,” and later a spy in “K.C. Undercover,” she was busy building a slim but exciting résumé.

In “Spider-Man: Homecoming” (2017), her deceptively small part as Peter Parker’s sarcastic classmate Michelle led to a third-act twist that unmasked her as the franchise’s infamous love interest, MJ. Zendaya reignites the chemistry with her superhero co-star Tom Holland in the forthcoming sequel “Spider-Man: Far From Home.” She also delivered a nimble, exuberant performance as a trapeze artist in the movie-musical “The Greatest Showman” (2017).

By mid-2018, after wrapping her eight-year run on the Disney Channel with the “K.C. Undercover” finale, Zendaya found herself worried about her next project for the first time in almost a decade. Then she read the pilot script for “Euphoria.”

At the Four Seasons in Beverly Hills, Zendaya, 22, collapsed on a couch. The stylish actress had spent a long day in maroon velvet stilettos, but she was still eager to talk about why she wanted this role so badly and whether she would be able to break Rue’s more vulgar habits in time for the “Spider-Man” press tour.

These are edited excerpts from the conversation.

Did “Euphoria” appeal to you because it was such a break from Disney?

There was no strategic plan. After shooting “The Greatest Showman” and “Spider-Man,” I went back to my Disney show, which is kind of like going to college and then having to go back and do the same grade over and over again. Not that I didn’t appreciate having a job. But it’s like you turn a switch on and do it, and then you get turned off and go home. I wanted more. Upon talking to Sam and finding out that Rue is really an incarnation of him and his battles with addiction and depression and a multitude of other things that everyone deals with­, it made sense why I connected with her.

You don’t do drugs. What do you have in common with Rue?

I feel like she’s a version of myself with different choices and circumstances. Rue is a good person, she just doesn’t know it. She’s in pain. There’s something innocent and redeeming about her that reminds you that she’s a human first and an addict second.

Is the intent of the show to be deliberately provocative?

I don’t find it that shocking, to be honest. People will. I kind of accepted the fact that it would be polarizing. I found a little calm in that. Whether people like it or not, it’s real. I’m telling somebody’s story. Just because it’s not happening to you doesn’t mean it’s not happening all the time, every day. It’s hard for me to speak on addiction because it’s not something I have dealt with directly. But I still had friends who were dealing with things, and I had to help them through it.

Were you nervous to step into a role this dark and occasionally graphic?

I was really nervous because I wanted to do well. It’s like going from nothing to everything — there were no steps in between. That’s why people think it’s such a stretch for me to play this character. There’s a lot of people who probably think I can’t do it because they don’t truly understand my personality. And I get it: I’m a Disney kid. There’s a lot to prove.

Sam told me I was on a mood board he made for Rue, and I didn’t believe him because I felt like there’s no way he’s seen anything that I’ve done. He took a risk on me, but he doesn’t see it that way. He would always say, “Yo, Z, I’m not worried about you.” I appreciate that.

How did you come to trust Sam to handle your onscreen relationship with Hunter Schafer, who plays Jules, one of the first major transgender characters to appear in a high school drama?

Anybody who meets or talks to Sam feels a sense of comfort around him. He’s a very open book. I’m glad that he wrote himself as me because he could’ve written it as a white dude, and then I would never have the opportunity to play a character like this. He directs most of the episodes, but if he’s not directing, we have all female directors, which is great. He’s also very collaborative and allowed us to fuse our experiences and our feelings into the character. Sam and Hunter have had long, in-depth conversations about life. And Hunter is an angel of a human. She’s brilliant. It’s not hard to be in love with her onscreen.

Your movie career got off to an impressive start with “Spider-Man: Homecoming.” Even though your part was small, did you know from the start that your character was MJ?

Yeah, I talked to the director [Jon Watts] prior to auditioning, and he said she gets bigger as the thing goes on. I was like: “Dope. I’m here for the long game.” I didn’t know she was going to be the sarcastic introvert. She’s a very guarded person and she doesn’t let a lot of people in. In the first movie, we just saw her shell. We kind of explore the softer sides of her in this upcoming one. Now she has to be more vulnerable because she likes Peter.

You pushed back against the Disney Channel’s original plan for “K.C. Undercover” — you wanted to be a producer, you wanted the title changed from “Super Awesome Katy,” you wanted to feature a family of color. Did you feel Disney needed to develop more diverse female characters?

Yeah, 1,000 percent. It was very necessary. It was either they did it, or I didn’t do it. It’s understanding your worth. If you’re in a place where you can move the needle, then do it. I’ve been able to help show the young Disney kids other paths to go. So hopefully it makes it a little easier to make that kid-to-grown-up transition that everybody puts all this emphasis on.

Have you already noticed a change in the types of roles you’re being offered?

I still get the corny stuff. It’s cool. I feel like I can do [“Euphoria”] and still have another world outside of it where I can do family movies and fun things like that. I’m trying to break the habit of using the F-word now because I use it so much as Rue, and in life. I’m about to go on tour for “Spider-Man.” It’s a wonderful family movie. I can’t be dropping F-bombs.

Surprise! Stowaway snake slithers out of man’s backpack on trip to Hawaii
Entertainment