What’s on TV Thursday: ‘The Cold Blue’ and D-Day Stories

THE COLD BLUE 8 p.m. on HBO. World War II was still raging when “The Memphis Belle,” William Wyler’s documentary about the crew of an American bomber, was released in 1944. That government-produced film made for a “thorough and vivid comprehension of what a daylight bombing is actually like for the young men who wing our heavy bombers from English bases into the heart of Germany,” Bosley Crowther wrote in The New York Times that year. To shoot it, cinematographers (including Wyler) flew on bombing missions; one of them, a first lieutenant named Harold J. Tannenbaum, was killed in the process. Restored footage shot for “The Memphis Belle” has been arranged by the director Erik Nelson for “The Cold Blue,” a new documentary, which uses Wyler’s material to give an intimate sense of what life was like in a World War II bomber. “It was more or less like being in death row in a penitentiary waiting on your turn,” one veteran says in a voice-over. “And you knew it was coming.” 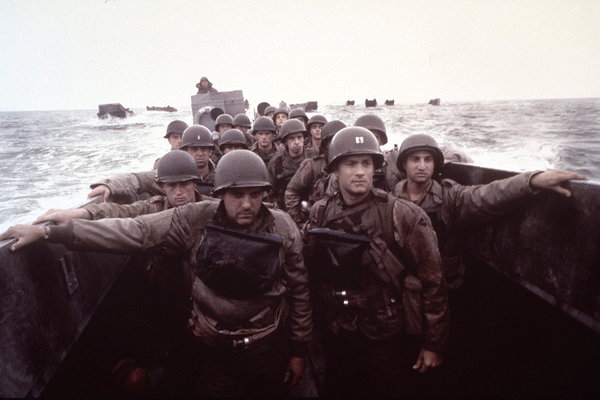 SAVING PRIVATE RYAN (1998) 7 p.m. and 11 p.m. on AMC. Steven Spielberg’s depiction of American soldiers fighting their way up Omaha Beach in one sequence helped “Saving Private Ryan” pick up Oscars for sound mixing, film editing, sound editing, cinematography and directing. The moments, near the start of the movie, leave an audience shell shocked and peppers its disorienting intensity with distinct acts of courage — a hallmark of the movie, which is led by Tom Hanks as an Army Ranger captain. In her review for The Times, Janet Maslin noted the frankness with which Spielberg depicted conflict. “This film simply looks at war as if war had not been looked at before,” she wrote.

THE LONGEST DAY (1962) 8 p.m. on TCM. Henry Fonda, John Wayne and Sean Connery are among the ensemble cast of this classic D-Day movie. (Also featured: Gert Fröbe, who would square off against Connery two years later as the villain in “Goldfinger.” He plays a German officer here.) The movie reconstructed the Normandy landings with an enormous budget and striking black and white imagery; it clocks in at around three hours. After its opening in Manhattan, Bosley Crowther wrote in The Times that “it is hard to think of a picture, aimed and constructed as this one was, doing any more or any better or leaving one feeling any more exposed to the horror of war than this one does.”

ALWAYS BE MY MAYBE (2019) Stream on Netflix. The stand-up comic Ali Wong and the “Fresh Off the Boat” lead Randall Park cooked up this romantic comedy, which the pair also star in. Imagined as a “Boomerang” or a “When Harry Met Sally” that pulls from their own experiences and identities, the movie tells of childhood sweethearts whose relationship sizzles anew later life, in their native San Francisco.

Prince Harry, Prince William, and Kate Middleton Deny Donald Trump What He Wanted Most After His 'Nasty' Comments