Home » Entertainment » What’s on TV This Week: ‘City Hall’ and ‘The Masked Dancer’ What’s on TV This Week: ‘City Hall’ and ‘The Masked Dancer’

Between network, cable and streaming, the modern television landscape is a vast one. Here are some of the shows, specials and movies coming to TV this week, Dec. 21-27. Details and times are subject to change.

WONDER WOMAN (2017) 6 p.m. on Cartoon Network. Superpowered sword and shield meet World War I weaponry in this DC Comics blowout, the first stand-alone “Wonder Woman” movie with Gal Gadot. (The second, “Wonder Woman 1984,” comes out this weekend.) Directed by Patty Jenkins, this take on the superhero’s origin story takes place primarily in the early 20th century, introducing Gadot’s character as a mythical Amazon warrior who lives with other Amazons on a Mediterranean island. That island is magically insulated from the rest of the world — until an American fighter pilot (Chris Pine) crash-lands there, tailed by German soldiers. The hodgepodge of mythology (of both the Greek and the comic-book varieties) and history that follows makes for a movie that “cleverly combines genre elements into something reasonably fresh, touching and fun,” A.O. Scott wrote in his review for The New York Times. The film’s “earnest insouciance recalls the ‘Superman’ movies of the ’70s and ’80s more than the mock-Wagnerian spectacles of our own day,” Scott added, “and like those predigital Man of Steel adventures, it gestures knowingly but reverently back to the jaunty, truth-and-justice spirit of an even older Hollywood tradition.”

CITY HALL (2020) 8 p.m. on PBS (check local listings). The documentarian Frederick Wiseman (“Titicut Follies,” “Ex Libris”) trains his patient, piercing lens on the Boston City government in this, his most recent documentary. Shot around Boston’s administration building and in other areas of the city (including, during one extended sequence, Faneuil Hall), the film follows Boston’s mayor, Martin J. Walsh, and other city employees during moments both mundane (streams of people arriving at City Hall, workers answering calls at a 311 center) and extraordinary (a town-hall meeting about a proposed cannabis dispensary that turns into an impassioned debate). In her review for The Times, Manohla Dargis wrote that the film is both “an exploration of civil society and the common good” and “fundamentally a portrait of a people.” Dargis and Scott each included the film on their lists of the top 10 movies of 2020. 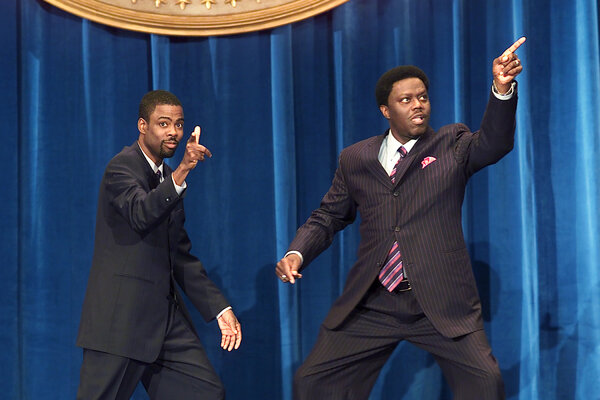 HEAD OF STATE (2003) 10 p.m. on Showtime 2. A black-tie donor event derailed by Nelly’s “Hot In Herre.” A presidential debate where candidates quarrel over whether a debate is the same thing as an argument. These are a couple memorable moments from “Head of State,” Chris Rock’s directorial debut and a very early-2000s satire of American electoral politics. Rock stars as Mays Gilliam, an alderman who’s unexpectedly chosen to be the Democratic Party’s presidential nominee. (He eventually enlists his older brother, played by Bernie Mac, to be his running mate.) The tone is set in the very first sequence, when a staid shot of Mount Rushmore tilts down to reveal the singer Nate Dogg performing at the monument’s base.

MEET ME IN ST. LOUIS (1944) 8 p.m. on TCM. Hear Judy Garland sing “Have Yourself a Merry Little Christmas” — and other songs that became standards — in this technicolor musical. Directed by Vincente Minnelli, the film follows four sisters coming-of-age over the four seasons leading up to the 1904 World’s Fair in St. Louis. The story it tells through sound and color, Bosley Crowther wrote in his 1944 review for The Times, is “warm and beguiling.”

A CHRISTMAS CAROL (1951) 7:50 p.m. on FXM. When this British adaptation of Charles Dickens’s “A Christmas Carol” debuted in 1951, it stood in stark contrast to some of the more upbeat versions that had come before. “Where the last ‘Carol,’ produced by Metro, was a ruddy and generally cheerful affair, this one is spooky and somber, for the most part, except toward the end,” Crowther wrote in a review for The Times. It’s fitting, then, that FXM is airing the 1951 version, with the Scottish actor Alastair Sim, alongside a rebroadcast of last year’s FX’S A CHRISTMAS CAROL, another gritty take on the tale. That newer version, with Guy Pearce as Scrooge and Andy Serkis as the Ghost of Christmas Past, airs at 9:40 p.m.

CALL THE MIDWIFE HOLIDAY SPECIAL 9 p.m. on PBS. This British series based on the memoirs of Jennifer Worth, an English nurse, has developed a fan base by offering a compassionate look at life — and a group of nuns at work — in a poor area of London in the late 1950s and ’60s. In a review for The Times, Jeannette Catsoulis called the show “unfailingly humane.” Those running low on holiday cheer may want to give this special episode a look.

1917 (2019) 8 p.m. on Showtime. This time last year, the director Sam Mendes exploded into the award-season race at the last minute with this meticulous World War I movie. (It ended up winning several Oscars, including one for Roger Deakins’s cinematography, though it fell short of winning best director or best picture honors.) Made to look as though it were shot in a single take, the film follows a pair of British soldiers (played George MacKay and Dean-Charles Chapman) who are sent on a dangerous mission to deliver a message to a battalion on the front lines. It’s the kind of movie most would doubtlessly prefer to watch in a movie theater, as many audiences did last holiday season; the contrast between December 2019 and December 2020 is pretty well encapsulated by the idea of watching “1917” on a small screen, stuck at home.

THE MASKED DANCER 8 p.m. on Fox. Fox had a hit with “The Masked Singer,” a bizarre competition show in which celebrities compete in singing contests while their identities are hidden by elaborate costumes. The series, which was itself adapted from a South Korean program, gets a spinoff with “The Masked Dancer.” The new show’s participants will presumably be up against both their fellow contestants and the elasticity of their costumes.

Colin Farrell Masks Up During a Trip to the Gas Station