Home » Entertainment » What’s on TV Saturday: ‘Halloween’ and ‘The Perfection’ What’s on TV Saturday: ‘Halloween’ and ‘The Perfection’ 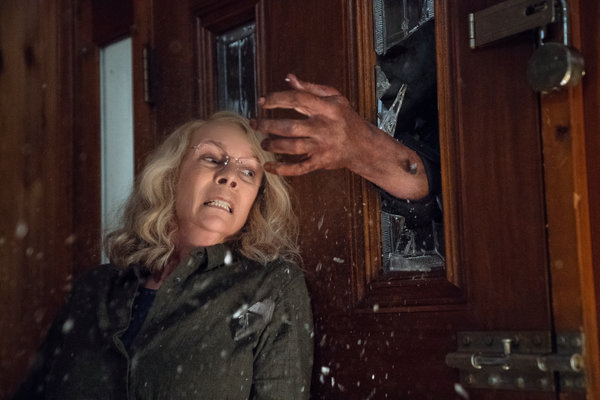 HALLOWEEN (2018) 8 p.m. on HBO; stream on HBO platforms. Forty years (and nine sequels and remakes) later, John Carpenter’s classic slasher film got yet another update, one that reprised Jamie Lee Curtis’s role as the baby sitter who survived a killing spree on Halloween night. Ignoring the narratives of the franchise’s other films, this reboot by David Gordon Green has our masked villain, Michael Myers (played by James Jude Courtney and the originating actor, Nick Castle), escape from a prison transfer and head straight back to Haddonfield. He’s out for Laurie, of course, who has become a paranoid, rabid grandmother with a fortress for a house. Fans of the original know what to expect, and overall, they should be pleased with the gruesome result. “Green wants us to believe in his Bogeyman, and Curtis is his ace card,” Jeannette Catsoulis wrote in her New York Times review. “Leaving no room for winks or giggles, she makes Laurie’s long-festering terror the glue that holds the movie together.”

RANSOM 9 p.m. on CBS. This crime series about a team of crisis and hostage negotiators wraps up its third run. The group is sought out for reasoning with criminals under intense pressure without resorting to violence. But that may change in this season finale, when Eric (Luke Roberts), the leader of the unit, considers drastic measures to free Cynthia (Karen LeBlanc) and her younger brother (Emmanuel Kabongo) after they’re abducted.

THE PERFECTION (2019) Stream on Netflix. If you enjoyed watching Allison Williams channel her dark side in “Get Out,” this twisted psychological thriller from Richard Shepard offers an equally delicious dose of crazy. The “Girls” star plays Charlotte, a former cello prodigy who abandoned her dreams years ago to care for her ailing mother. A decade later, Charlotte reaches out to her former teacher and is invited to judge a competition where she meets Lizzie (Logan Browning), the star pupil who has taken Charlotte's place at a prestigious Boston academy. Each is fascinated by the other, both enviously and sexually. From there, the movie zigs and zags and plunges into campy horror territory.

PITCHING IN Stream on Acorn TV. In this limited-series drama, a widower (Larry Lamb) reconsiders selling his camping park on the North Wales coast when his unpredictable daughter (Caroline Sheen) moves back home and offers to help out.

4 MONTHS, 3 WEEKS AND 2 DAYS (2008) Stream on Mubi; Rent on Amazon, iTunes or Vudu. With the debate over abortion rights playing out in the United States, this moving drama shines a light on the issue through the eyes of Gabita (Laura Vasiliu), a university student in Communist Romania who asks her friend Otilia (Anamaria Marinca) to help her secure an abortion. The procedure is illegal under Nicolae Ceaușescu’s rule, so the girls turn to a secret abortionist (Vlad Ivanov) who agrees to help under one revolting condition. You may find what ensues difficult to watch but impossible to look away from.

Inside Tamzin Outhwaite’s luxe £1.7m home as she splashes out on £12k sauna
Entertainment