Home » Entertainment » Wearing Their Hearts on Their Graduation Caps Wearing Their Hearts on Their Graduation Caps

A Mondrian painting represents personal joy to a first-generation college student who bucked family pressure to choose a “safe” major and graduated with an art history degree.

A quotation from a Christian poet reminds another student graduating this spring to appreciate both the highs and lows of her university experience.

Decorating one’s graduation cap has become a way for many students to express themselves on their big day, but often the meaning behind their artwork can be hard to decipher. We asked readers graduating this year to tell us the stories behind their mortarboards.

We heard from dozens, including ones who used computer code or Lego bricks. Here’s a selection; their comments have been edited and condensed for clarity. 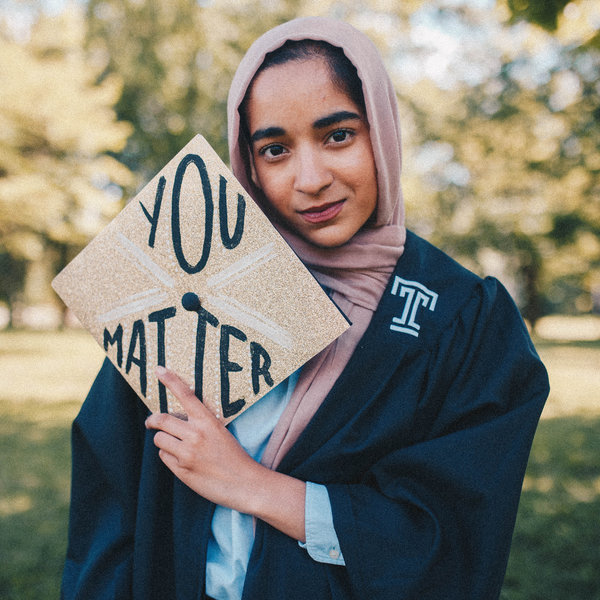 — Shefa Ahsan, 22, from Lanham, Md., graduated from Temple University in Philadelphia with a B.A. in film and media arts.

I immigrated to the United States from Jamaica five years ago, away from my family there. I had to work two or more jobs to survive, but I stayed in school full time and was on the dean’s list every semester.

The quote says, “If yuh waan good yuh nose haffi run,” which means that if you want to succeed, you must work hard.

— Peta-Gaye Dixon, 27, from New York, graduated from Brooklyn College with a B.A. in childhood education.

My cap is a representation of me. I have natural hair and wear glasses. It has my favorite Bible verse (Proverbs 31:25) as well as an image of my grandparents, who died before my graduation. They were and are still very special to me; I wanted to have them there with me on my special day.

— Zoë Lewis, 24, from Nottingham, Md., graduated from McDaniel College in Westminster, Md., with an M.S. in gerontology.

I’m a first-generation college student, so the pressure to pursue a “safe” major was on from the start of college. Studying art history was a bet that I’d get the most out of college engaging with something I truly loved, and one that I’m happy to say paid off.

My cap features Mondrian’s “Fox Trot B,” my favorite painting in the Yale University Art Gallery. For Mondrian, ideas come first, with dancing a close second. He’s a reminder of the different ways one finds joy in a community of enthusiastic and open-minded people.

— Xander Mitchell, 22, New Haven, graduated from Yale University with a B.A. in history of art.

I had the students in the kindergarten and first-grade class I worked in as a student teacher write their name on a petal that I turned into a giant flower. I wanted to take a small part of them with me to graduation, as I don’t graduate locally.

The center daisy is in honor of my aunt Cathy, who died from cancer. Daisies were her favorite flowers.

— Rebecca Olsen, 22, from Atlanta, graduated from Liberty University in Lynchburg, Va., with a B.A. in English and religious studies.

I wanted it to be representative of the culture I have and the vibrancy that comes with it. None of this would be possible without my family.

— Priscilla Lugo, 22, from Austin, Tex., graduated from the University of Texas at Austin, with a B.A. in English and women and gender studies.

As one of the only Republicans on my campus (a liberal arts college no less), it was a huge feat that I stayed firm in my beliefs and didn’t become a Democrat.

— Katie Anderson, 21, from Washington, graduated from Fort Lewis College in Durango, Colo., with a B.A. in political science.

Canoe tripping has been a lifelong passion of mine and it has taught me so many important life lessons. You cannot always float easily downstream in life; sometimes you have to work hard and paddle upriver against the current, but that is what makes the adventure worthwhile.

— Emma Gwyn, 22, from Burlington, Vt., graduated from the University of Vermont with a B.S. in environmental sciences and a minor in geospatial technologies.

I decorated my cap mostly with Lego bricks because they have always been a hobby of mine.

The blue bus represents my college job as a bus driver for our student-run bus company. It was a big achievement of mine to get my New York State Class B Commercial license and become a driver for the company, so I made sure to include that on my cap. Public transportation is also a big part of environmental planning!

There’s so much more to what is underneath these words, coming from an immigrant who grew up in Hong Kong, having witnessed the horror of Cultural Revolution through her family’s eyes in China and the Tiananmen Square massacre as a college student.

Walking through the crowd, in the sea of black gowns and hats, I wanted my words in blue to shine through the red and white stripes and show the world my loyalty and love for America, my son’s birthplace and where a judge declared my citizenship in 1994 and welcomed me to the tapestry of this nation.

It’s very hard for an immigrant to make a presence in a foreign country. The barriers in culture and language bar immigrants from opportunities, making it almost impossible for most people to succeed. That’s what I center my work on.

— Julie Lam, 50, from New York, graduated from Lesley University in Cambridge, Mass., with an M.F.A. in creative writing for fiction.

My cap is a scale model of my university with the quote “it’s all about perspective” across the top! I’m a major in theatrical design (scenic design in particular), and with all of the drafting and model building that I’ve done over the years, what better way to represent both what I love and what I’ve spent most of my time doing!

— Mallory Gabbard, 22, from Los Angeles, graduated from the University of Southern California in Los Angeles with a B.F.A. in theatrical design.

“Hello World!” is often the first thing that programmers write when learning to code, and it captures my feelings about moving away from my hometown to start a career as a software engineer. Additionally, the “R,” for Rice University, is meant to look like a circuit board representing the past four years working toward my degree in electrical engineering.

— Alexandra Du, 22, from Houston, graduated from Rice University in Houston with a B.S. in electrical and computer engineering.

I have been accepted into the Disney College Program, a long-term internship program at the Walt Disney Company. I will be working as a character attendant in Orlando, and I could not be more excited. Cinderella, here I come!

— Emily Cole, 21, from Boston, graduated from Simmons University in Boston with a B.A. in communications.

One of the most important lessons I’ve learned during my time at UW-Madison, and specifically the journalism school, is to seek truth. If something doesn’t seem quite right, there’s probably more to the story. Regardless of the political climate and what people might say about the future of journalism, there will always be a need for truth and for people to search for it.

— Izabela Zaluska, 21, from Madison, Wis., graduated from the University of Wisconsin, Madison, with a B.A. in journalism and a minor in criminal justice.

When I was in high school we had to sell my childhood home and the farm my great-grandparents built. I was the fifth generation to live in that house and was heartbroken.

I decided to incorporate my family and that history by using flowers like those at the house — roses, magnolias and especially lily of the valley (we still have a patch of the lilies at our current house that was part of my great-grandma’s patch). The red, silver and gold are for my schools — red and silver for my undergrad at Ohio State, and the gold for my graduate studies at the University of Minnesota, which I will begin this fall.

— Brynna Bargfield, 22, from Polk City, Iowa, graduated from Ohio State University in Columbus, Ohio, with a B.S. in public health and minors in Arabic studies and public policy.

A note to readers who are not subscribers: This article from the Reader Center does not count toward your monthly free article limit.

Follow the @ReaderCenter on Twitter for more coverage highlighting your perspectives and experiences and for insight into how we work.

Lela Moore is an audience writer for the Reader Center. She covers reader reaction to breaking news and popular articles on topics ranging from politics to business to sports. She also moderates the New York Times Reader Center Group on Facebook. @runlelarun • Facebook