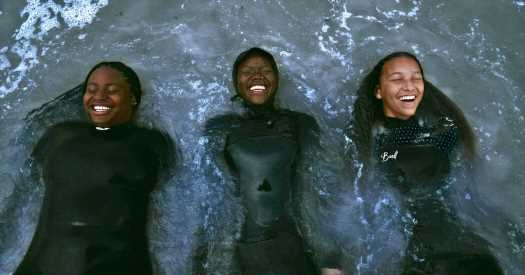 To get the perfect shot of a surfer in the ocean you need at least four things: an expert who is equally comfortable working on a surfboard and swimming in open water; a camera, covered in waterproof material; a comprehensive safety plan; and a lot of luck.

The two teamed up to create the photography and video for an article published online Tuesday that traces the history of Black surfers and their efforts to fight racism in the sport. The article, the latest installment in The Times’s “Black History, Continued” series, features visuals of Black surfers — at sea and on land — catching a wave just right, soaking up the sun and bonding by the shore.

Each image maker brought something different to the project.

“Morgan was our guy who was in the action area,” Eve Lyons, the photo editor on the project, said, adding that she was looking for variety in his videos. “What we wanted Josh to get was the connection of the body to water. The feelings, whether it’s adrenaline, happiness, joy, fear, freedom, meditation or peace.”

The men, brought together by Ms. Lyons and Marcelle Hopkins, the visual editor on the project, immediately shared a vision — it helped that they were already fans of each other’s work. Though Mr. Kissi is not a surfer, some of his work has focused on Black people in water, and in 2020 he produced a short documentary for T magazine on Long Island’s Black beachfront community.

After Ms. Hopkins gave Mr. Kissi a list of possible collaborators that included Mr. Maassen, Mr. Kissi made his choice, having followed Mr. Maassen’s groundbreaking surf photography for years. They both wanted to capture the emotion of surfing, as well as the relationship between the surfers and the ocean.

“It was just kind of a natural fit because of the way he treats colors, the way he has this depth when it comes to his motion, when it comes to surfing in general, and just the visuals that he’s been able to put together,” Mr. Kissi said of Mr. Maassen’s cinematography.

For both visual artists, though, the assignment was a learning experience. “I watched him ask questions that were very left field from what most people who are steeped in surfing would immediately ask, or not even bother to ask,” Mr. Maassen said of Mr. Kissi’s work. “So it also gave me a pretty fresh perspective.”

Even with the synergy between the two, the shoots, which took place in California and New York in July and August, took a lot of planning.

“Surfing is potentially a dangerous sport,” Ms. Hopkins said. “The ocean is powerful and unpredictable.” She spoke to The Times’s news security manager, Eric Jones, about how to minimize risks on the assignment and arranged for a lifeguard to be on hand at all times during the shoots. Potential collisions in the water were at the top of their safety concerns.

“We worked with people who are strong swimmers, who know the sport, who can predict where the surfers are going to go,” Ms. Hopkins said.

Ultimately, each of the three shoots went smoothly and the surfers were fortunate to find waves, even though the conditions were different. In California, there was a sunny, perfect day, and a cloudy early morning; in New York, the weather was overcast, rainy and windy.

Mr. Kissi worked mainly on the beach, engaging with his subjects, though he did get into the water on occasion. Mr. Maassen primarily swam in the water with the surfers, his waterproof camera close at hand, and sometimes jumped on a board himself.

“I can go on and on and on describing all of these limitations and how extreme it is, and how hard it is, and how what I do is so brave and crazy and dramatic,” Mr. Maassen said. “But in reality, it’s very simple.” He pointed out that the limitations imposed by this working environment actually removed some of the pressure to get a “flawless” shot. “It really just becomes this confluence of your ability to swim and your ability to be inspired and capture what you want,” he said.

Mr. Kissi and Mr. Maassen’s approach resulted in film and photography that carry viewers through the waves, creating a soft, intimate experience. Mr. Kissi said he was proud of reintroducing what he called a “new, rich visual lexicon of images — not only of people just swimming, but people thriving in the water, and not just surviving.”

As discussed in the text of the article by Diane Cardwell — whose memoir on surfing, “Rockaway,” was recently picked up by Netflix with Kerry Washington as producer and star — there is a notorious stereotype that Black people don’t swim, or don’t take part in water activities. As a package, this piece provides an alternative view.

“We see this as an opportunity to contribute something significant to the canon of imagery of Black surfers,” Ms. Hopkins said. “We wanted to bring powerful and evocative images that would last beyond this story and be seen by future generations.”

At What Temperature Should You Really Be Drinking Red Wine At?

Jennifer Aniston Might Be Launching a Beauty Brand: Here’s What We Know
Entertainment