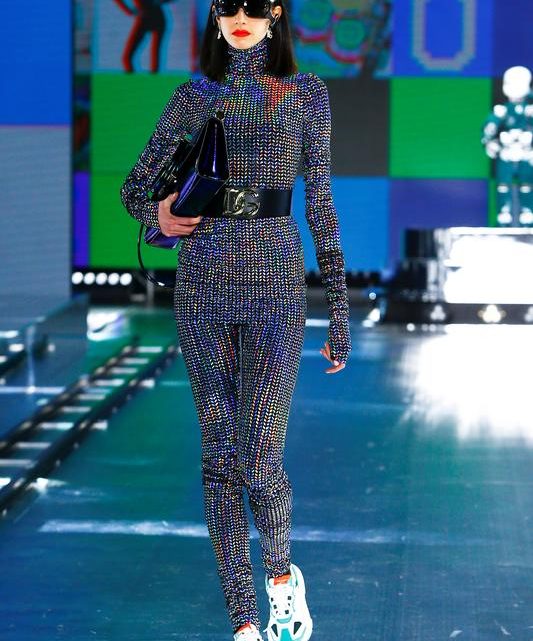 MILAN (Reuters) – Models walked down an empty theatre closed by the coronavirus pandemic for Valentino’s latest collection, while in Dolce & Gabbana’s show they mixed with robots in a disco-like atmosphere as the curtain came down on Milan Fashion Week on Monday.

Valentino paid tribute to cultural venues including cinemas and theatres which have been closed for almost a year, hosting a sober show dominated by black and white clothes in Milan’s largely empty Piccolo Teatro.

Valentino’s autumn/winter 2021-2022 collection mixed long, evening lace dresses with short skirts and capes. His decision to present the show where he did was an act “of love, to continue to sustain culture.”

In contrast, bright colours, leopard prints and glittering gold and silver coats and blouses featured in Dolce & Gabbana’s presentation, which was streamed lived on the brand’s website and social media.

The duo’s creations included jackets with big shoulders in a nod to the 1990s, faux fur and mini-dresses resembling space outfits. See-through plastic overcoats were reminiscent of the protective gear worn by medics fighting the virus in hospitals.

Models paired with two small robots created by the Italian Institute of Technology to celebrate the work of Italian researchers in robotic technologies and artificial intelligence.

The shows brought to an end six days of digital shows due to COVID-19 restrictions, which were tightened further by the Rome government over the weekend due to a surge in the number of infections.

What Is Starbucks’ Iced Shaken Espresso? The Drink Lineup Is A Twist On A Classic Sip
Entertainment