HOPEWELL, N.J. — History can seem thick on the ground in this quaint, prosperous town of 2,000 in semirural central New Jersey, not far from where Washington crossed the Delaware. A cemetery on the main street holds a grand obelisk honoring John Hart, a signer of the Declaration of Independence. Next to it stands a monument topped by a stone on which another patriot stood to give a fiery speech supporting the cause of liberty.

But one afternoon in late summer, a group from the Museum of the American Revolution in Philadelphia drove right past those landmarks, and followed a winding road up to a burial ground with a different story to tell.

Stoutsburg Cemetery, tucked in a clearing about halfway up Sourland Mountain, is one of the state’s oldest African-American burial grounds. It may also be one its best chronicled, thanks to Elaine Buck and Beverly Mills, two self-described ordinary small-town, middle-aged women turned “history detectives” who have spent more than a dozen years combing through wills, property deeds, tax records and other documents to recover the area’s overlooked Black history. 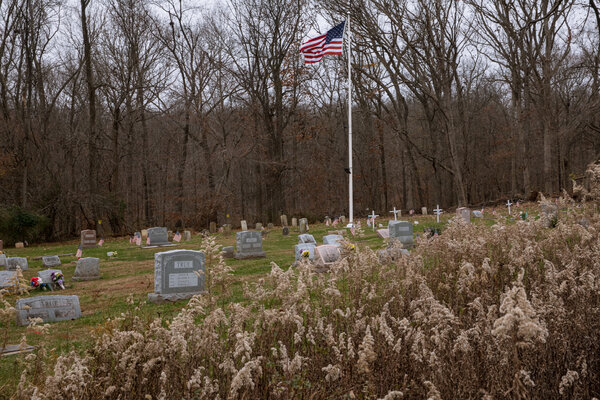 Ms. Buck and Ms. Mills have had plenty of aha moments, chronicled in their 2018 book, “If These Stones Could Talk.” Now, the museum’s researchers had brought another revelation: Some Black people in the Sourland community had voted in the decades following the Revolution.

“To think that the people of color who lived here were able to vote here, before they were disenfranchised? In 1801?” Ms. Mills said, as the museum’s team brought out a wreath honoring Ephraim Hagerman, a Black man from the community whose name appears on a recently surfaced 1801 poll list.

“It’s mind-boggling,” she said. “It seems like there are just stories within stories in this cemetery.”

Plenty of people research their genealogy, or undertake local history projects. But few create their own museum, as Ms. Buck and Ms. Mills did when they founded the Stoutsburg Sourland African American Museum, which opened in 2018 in a one-room 19th-century African Methodist church not far from the cemetery.

The museum may seem to tell just one hyperlocal story, but it’s part of a broader effort to paint a fuller, more accurate picture of early America. And notably, at Sourland, the story is being told by descendants themselves.

“They are true historians,” Philip Mead, the chief historian of the Museum of the American Revolution, said of Ms. Buck and Ms. Mills. “Their research can put a lot of us to shame. But this is not an academic exercise in creativity and curiosity. It’s very emotional and powerful and raw.”

There were places like Sourland all over early America, he said. “But how much of this phenomenon of African-American communities finding a place for themselves in these sour lands, these undesirable properties, is lost to historical memory?”

Ms. Buck, 67, and Ms. Mills, 70, both grew up in the Hopewell Valley, which is predominantly white. Today, they sometimes give presentations in local schools, which under a 2002 law are urged to include Black history in their curriculums.

But when they were students, they recall, they learned almost nothing about slavery in New Jersey, which was the last of the Northern states to abolish it. And little to nothing was said about the Black families whose roots in the area ran as deep as those of the white families whose names were on local landmarks — or how Black people had come to be in the area at all.

“History wasn’t interesting to me, and the reason is they left half the people out,” Ms. Buck said. “All you heard about was white people with wigs on.”

Older relatives would sometimes tell stories about life on Sourland Mountain, where many people worked in peach orchards that thrived there in the late 1800s. But even as adults, they said, they didn’t give much thought to the older stones near the center of the Stoutsburg cemetery.

“We just buried people there, and then went about our business,” Ms. Mills said.

In 2006, Ms. Buck, whose husband is the cemetery’s president, got a call from an older white man in a nearby town. His neighbor was planning to build a driveway across what he believed to be an unmarked African-American burial ground, and he wanted help stopping it.

“The more he talked to us, the madder we got,” Ms. Buck recalled.

She and Ms. Mills found themselves hiring an archaeologist and poring over 19th-century wills — and contacting the local press and the state attorney general. The property owner dropped his plans.

“But it made us think, we better go to our own graveyard and see who we have buried there,” Ms. Buck said. “And that snowballed into the book.”

In the 19th century, Sourland Mountain — named, some say, for the poor quality of its soil — had a reputation as a remote, hardscrabble, even dangerous place. And its Black settlements did not go unnoted by white chroniclers, who sometimes peddled exaggerated stories. In 1883, a white doctor and local historian published an oral biography of Sylvia Dubois, a formerly enslaved woman who ran a rough-and-tumble tavern on the mountain (and who was said to have lived to the age of 115).

A few years earlier, in 1880, a correspondent from The New York Times had come through. He was there to cover a sensational murder trial, but ended up filing a long dispatch under the blaring headline “A REMARKABLE COLONY OF BARBARIANS IN THE MIDST OF CIVILIZATION.”

The article traced the settlement’s origins to William Stives, a “mulatto” Revolutionary War veteran who had married a Native American woman and built a cabin in the “bleak and uninhabited” hills. But it mostly expressed horror at the inhabitants’ “lawless character” and their reputation for rampant “miscegenation,” as evidenced by the appearance of many couples he saw. .

“That one really got to me,” Ms. Buck, whose husband’s aunt is a descendant of Stives, said of the article. “They’re calling my in-laws barbarians?”

Ms. Buck and Ms. Mills never located Stives’s grave, as they had hoped. But they did find records of his military pension application and his discharge papers — signed, they were stunned to see, by George Washington.

They also uncovered the story of another pioneer, Friday Truehart, Mills’s fourth-great-grandfather, who arrived from Charleston, S.C., in 1780 at age 13 with his enslaver, a minister named Oliver Hart.

A 19th-century newspaper article said Truehart had been born in Africa, and named for Friday in “Robinson Crusoe” by a ship’s captain. But then Ms. Mills found the Hart’s transcribed diary, which included an entry noting the purchase of 4-year-old Friday and his mother, Dinah, along with the child’s precise birth date — Friday, May 29, 1767.

Ms. Mills calls learning how Truehart (who was freed in 1802) arrived in Hopewell “one of the most exciting discoveries of my life.”

Through their research, the two women have connected with white people whose history is intertwined with the cemetery. Among them is Ted Blew, the fifth-great-grandson of the man who enslaved Tom Blew, whose son Moses is buried at Stoutsburg.

Mr. Blew met Ms. Buck and Ms. Mills in 2018, when they spoke at a Blew family reunion. He had known from wills that his ancestors owned slaves. But until he visited Stoutsburg, he said, that fact was just “words on a page.”

“The cemetery has really opened our eyes to this part of our family history,” he said.

When the Museum of the American Revolution sent Ms. Buck and Ms. Mills the 1801 poll list with Hagerman’s name, the two women immediately spotted Tom Blew’s name, along with that of another Black man from the community.

And the researchers are still puzzling over how to read a third name. Is it “Isaac Blew”? Or “Jude Blew” — as Tom’s wife, Judith, who is also buried at Stoutsburg, was referred to in other documnts?

If so, it would be an anomaly. Under the law at the time, only widows and unmarried women could vote. And in 1801 Tom Blew was still alive.

Ms. Mills, a retired state government supervisor who in 2016 became the first Black woman to serve on the borough council in Pennington, a town next to Hopewell, took an optimistic view.

The rollback of voting rights in early New Jersey is an extremely complicated story the museum explores in the current exhibition, “When Women Lost the Vote.” (A digital version has just been released on its website.) Mr. Mead said he saw in the 1880 Times article echoes of the same racist fears that led New Jersey — the only state at the time to grant voting rights without respect to both sex and race — to pass a law in 1807 restricting the franchise to white men.

In the first decade of the 19th century, the free Black population of New Jersey, which passed a gradual emancipation law in 1804, was growing. It was not a huge number of people, Mr. Mead said, but whites may have feared that New Jersey’s democratic experiment “was getting too democratic.”

In their book, Ms. Buck and Ms. Mills discuss the tenuousness of life on the mountain. Many of the early Black landowners struggled to hold onto their property. By 1900, a peach blight had sent many who worked in the orchards down to seek work in the valley, or to leave the area entirely.

But the stones in the cemetery, and their stories, are still there.

“I’m just in awe of these people,” Ms. Mills said. “This research has completely changed my life. It told me who I am.”