TV spin-offs: The best and worst

TV’s most socially-awkward sitcom character, The Big Bang Theory’s Sheldon Cooper, is getting his own spin-off series.

The eccentric Sheldon, played by Jim Parsons, has been at the centre of America’s most popular comedy show since it started in 2007.

Earlier this week, CBS confirmed that The Big Bang Theory’s new spin-off, Young Sheldon, will be a prequel focusing on the character’s early years.

But will it work? Some spin-off shows have been hugely successful – but there have also been quite a few flops.

Here’s a round-up of some of the best and worst: 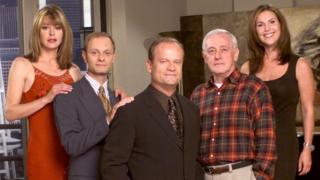 Frasier is one of television’s most successful spin-offs.

It lasted for 11 seasons and notched up 264 episodes – just behind its predecessor Cheers, which managed 270.

“Frasier had a different style and sense of humour to Cheers,” he says. “A spin-off needs to look and feel different. A lot of bad spin-offs are just watered down versions of the original.”

The change certainly worked wonders for Frasier – the sitcom broke an Emmy Awards record, winning 37 over the course of its run (although the record was later beaten by the pesky Game of Thrones).

Better Call Saul, which began in 2015, was created by Vince Gilligan and Peter Gould, the brains behind Breaking Bad.

“Most shows are not Marvel Comic universes, they’re built around one or two heroes,” he says. “But if you take a minor character, there’s more chance of succeeding. Then you’re into something much nearer to a Hollywood franchise.”

Jeffery agrees: “Angel is a good example of a character who maybe wasn’t getting the screen time when he was on Buffy The Vampire Slayer, so he was given a show where there was more space to explore that character.”

Happy Days and its seven spin-offs

Happy Days certainly knows a thing or two about spin-offs – it had seven. Seven!

The most successful were Mork & Mindy, which starred Robin Williams; and Laverne & Shirley, which was fronted by Penny Marshall and Cindy Williams.

The latter, which first aired in 1976, focused on two single room-mates (who had been friends of Fonzie’s in the main show) who work as bottlecappers in a Milwaukee brewery.

It ran side-by-side with Happy Days, and by its third season had become the most popular TV show in the US.

The show was cancelled in 1983, but it still managed an impressive eight seasons.

As one of the most successful sitcoms in television history, Friends was ripe for spin-off when it ended in 2004.

Only Matt LeBlanc stuck with the character that made him famous, and Joey was launched that September.

But it didn’t go down well with fans, and viewing figures were low. It was cancelled after two seasons, with the final eight episodes not even making it to air.

“Matt LeBlanc was fantastic in [Friends] but he was playing a caricature,” Billen says. “I’m not sure there was enough complexity to Joey as a character, he was more of a clown, and it’s difficult to build a show around that premise.”

Jeffery adds: “I don’t feel there was a clear creative vision behind Joey, they just wanted to keep the Friends train going for a few more years.”

The Mary Tyler Moore Show and its three spin-offs

When it comes to spin-offs, Billen describes The Mary Tyler Moore Show as “the mother of them all”.

He explains: “It was so successful, the best friend Rhoda, played by Valerie Harper, got a spin-off. And the neighbour and landlady Phyllis also span off, but the really significant one was Lou Grant.

“In the original show, Mary Tyler Moore’s character worked in a TV station in the newsroom, and the news editor [Grant] then span off into a drama series. It ran many seasons, and was a post-Watergate view of investigative journalism.”

Including the original, that totals an impressive four shows in the Tyler Moore universe.

Only Fools and Horses and Green Green Grass

Ask a British sitcom fan what their favourite shows of all time are, and it’s likely Only Fools and Horses will figure highly on their list.

It’s slightly less likely they’d choose The Green Green Grass, the Fools spin-off that began in 2005 and focused on Boycie and his wife Marlene

It managed 32 episodes but was cancelled in 2009 after continuing negative reviews from critics.

The world of CSI

CSI: Crime Scene Investigation began in September 2002 and was hugely popular with audiences.

So popular, in fact, that it sparked CSI: Miami, CSI: NY and the more recent (and less successful) CSI: Cyber.

Jeffery says the CSIs “work on a business level because you’re giving people more of what they enjoyed before”.

CSI: Skegness surely only a matter of time.

Jeffrey thinks it could be just the right time for The Big Bang Theory to get the spin-off treatment.

“I believe it’s close to being renewed again but it doesn’t feel like it’s got too much life left in it,” he says. “It’s probably got a couple more seasons before the cast try and shoehorn themselves out of the show.”

Big Bang may well be ripe for a spin-off, but its makers will have to tread carefully.

“There’s absolutely no guarantee a spin-off will work better than any brand new comedy or a brand new programme,” cautions Billen.

“It will give you ratings for the first couple of episodes, and after that it sinks or swims on its own merit.”

Tarte Sale: Save Up to 50% on Lashes, Liner and Lip Items
Entertainment