It was 2 a.m. on a Tuesday when the raid began at the Eyewitness War Museum in the town of Beek, the Netherlands.

First, a group of thieves teased open the museum’s front gate. “You can see it on our cameras,” Wim Seelen, the museum’s director, said in a telephone interview.

But then, they disappeared.

An hour later, the burglars returned in several estate cars. In a scene reminiscent of a heist movie, they spread out tires across the highway that runs past the museum to create a roadblock, and parked a fake police car beside it, so it looked official.

Over the next five minutes, the group — maybe 12 people in total, Mr. Seelen said — battered down the museum’s front door, broke display cabinets and took what they’d come for: nine mannequins wearing rare Nazi uniforms. The outfits included one worn by Hitler’s personal chef, and another by a high-ranking member of the S.S.

The robbers took other items of World War II memorabilia, Mr. Seelen said, with the haul worth about $1.5 million in total.

“It was done with military precision,” he added. The museum’s alarms went off, but the police — held up by the roadblock — arrived too late to catch anyone. 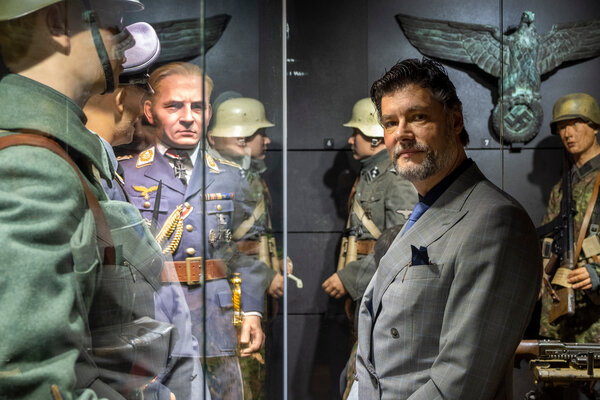 The Aug. 4 raid in Beek was only the most dramatic in a string of recent robberies from World War II museums in Europe, and the burglaries are spreading panic among similar institutions.

Since March, four museums in the Netherlands and Denmark have been broken into, and memorabilia, including Nazi uniforms, has been stolen. The most recent raid took place on Nov. 3, when robbers broke through a window at the German Museum North Schleswig, in southern Denmark, and made off with three mannequins in Nazi outfits.

Administrators from all four of the burglarized institutions said in telephone interviews that they believed the thieves were acting on the orders of collectors looking to get their hands on rare Nazi memorabilia. But they were uncertain whether the robberies were carried out by the same group, or were simply part of a worrying trend.

Officers of the Dutch and Danish police said in telephone interviews that they had no suspects in any of the robberies, but were looking for patterns.

Richard Bronswijk of the Dutch police’s art crime unit, said his team had two theories: that wealthy collectors in Russia or Eastern Europe had ordered the robberies, or that they were undertaken by supporters of the far right. The second theory was less likely, he added, “as those guys don’t have much money, and like to buy replicas.”

The raid at the Eyewitness War Museum was incredibly professional, he said. “They were really like ‘Ocean’s Twelve,’” he added, referring to the Hollywood heist movie.

The Netherlands and Denmark, which were both occupied by Nazi Germany during World War II, have numerous small, private and state-funded museums devoted to the history of that conflict. Many have glass display cases filled with memorabilia including weapons, and dioramas depicting scenes from the war, with mannequins in original uniforms. There are around 100 in the Netherlands alone, Mr. Seelen estimated.

Many Dutch museums have taken rare items off display or improved their security systems in response to the recent robberies. The Arnhem War Museum has installed anti-tank barriers at its entrance, “so people can’t come with a big truck,” said Marina Moens, one of its owners.

Concern is growing in Denmark, too. “I’m sure every museum’s taking precautions,” Henrik Skov Kristensen, the director of the Froslev Camp Museum, said in a telephone interview. “But if someone’s determined to do something like this, they will.”

Mr. Kristensen’s museum, set in a former prison camp in Denmark, was robbed in March. The burglars also took S.S. uniforms. After finding no leads, the Danish police closed the investigation in April, he said.

Giel van Wassenhove, a Belgian dealer in military memorabilia, said in a telephone interview that the value of Nazi items had been rising for years. “The stuff that’s being stolen is all very desirable, and the prices are going crazy,” he said. “Everyone knows if it’s got a Nazi emblem on it, its price is high.”

But Mr. van Wassenhove played down suggestions that a boom in far-right collectors was driving the soaring prices. Most buyers were investors simply chasing a profit, he said.

Many museums might not realize the value of objects in their collections, Mr. van Wassenhove added.

Those that do are not taking any chances: Ms. Moens of the Arnhem War Museum said that, in addition to installing anti-tank barriers, the museum had taken all its Nazi uniforms off display. In October, the War Museum Overloon returned two rare books it had borrowed from an Amsterdam institute, including a “Book of the Dead” listing 1,500 victims of the Holocaust at Auschwitz. Janneke Kennis, a spokeswoman for the museum, said the museum feared the books could be targeted by thieves.

Mr. Seelen said the raid at the Eyewitness Museum had been so devastating that, for weeks afterward, he considered closing down. He said he knew he would never see the items again.

But World War II museums are not just homes for memorabilia, he said: they play an important educational role.

“The Second World War was a period of so much suffering that we have to tell the story of it, to make sure it never ever happens again,” he said. “I’m not going to quit telling that story.”

The truth about Kyle Chrisley’s relationship with his father
Entertainment