The Museum of Modern Art’s permanent collection is on the move. It’s not leaving the building but it’s in motion as never before. On Saturday, MoMA will unveil what it calls the Fall Reveal, a rehang of about a third of its holdings, or 20 of 60 galleries. This is the first phase of an ambitious plan to regularly rotate the entire collection. In short, the result bodes extraordinarily well.

There are some wonderful acquisitions to be appreciated and some pieces that have been in storage so long they might as well be new. Given its own stand-alone gallery on the fifth floor for the first time, Gerhard Richter’s wrenching “October 18, 1977” takes on a new prominence. This 1988 suite of 15 blurry gray paintings about the capture, suspicious deaths and funeral of the Baader-Meinhof anarchist group meditates, appropriately, on the power of the state. Also here you’ll find the architect Hermann Finsterlin’s rarely exhibited “Study for a House of Sociability” in polychrome plaster and paint from around 1920, which presages Frank Gehry, Milan’s Memphis designers and Frank Stella.

In the buildup to the reopening of its newly expanded building last October, the Modern announced a philosophical reorientation that broadened its focus to a global, rather than just Western, history of modern art. Its traditionally siloed art mediums would also be integrated; painting and sculpture would share space with photography, design, works on paper, film and music. But perhaps most exciting was the ambitious plan to switch out a substantial chunk of the collection every six months. For an institution where permanent collection displays once lasted, largely untouched, for 5 or 10 years, this pace was tantamount to warp speed. 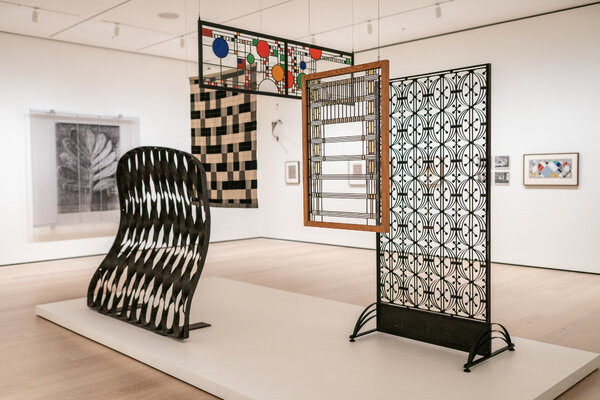 Visitors would see more of the museum’s riches — as long as they kept coming back. Curators would engage with these riches more deeply, in cross-departmental teams. Perhaps curatorial thinking would move faster under the pressure.

This first Fall Reveal indicates how the museum pulled off this prodigious effort. The collection is still spread through three levels and proceeds chronologically from the fifth floor (1880s-1940s), to the fourth (1940-1970) to the second (1970-present) — with the same group of galleries on each floor reinstalled each time. In addition, while the art changes, the galleries on four and five remain dedicated to a fairly defined style, period or medium. You will encounter new examples of design or photography, Dada or Pop Art in pretty much the same place. The rehang has more holdovers in terms of artists and even artworks than I expected. But the overlay of the previous and the current installations can create a pleasant sense of familiarity: Was this here last time? In this gallery? On this wall?

Admittedly, certain irritants persist: Some galleries still studiously avoid helpful names of art movements, opting for phrases that are bland or vague. The fourth-floor gallery, with a mix of what most people would recognize as Pop Art, was previously “From Soup Cans to Flying Saucers” and is now “Domestic Disruption.” No offense, but maybe the museum needs its own writers’ room.

Otherwise, the first Fall Reveal mostly feels like a good settling in, another step in a process whereby visitors, curators and art are getting to feel at home in the new Museum of Modern Art. Here are some of the standout galleries, floor by floor.

The fifth floor display is temporarily two galleries short for the next week or two. A large one will be devoted to Parisian art and design between the World Wars, another to Weimar portraiture. I’m looking forward to seeing Gabriele Münter’s “Woman in Thought II,” a painting from 1928 acquired last year, and perhaps writing about these spaces later.

According to the Laws of Chance This is the first of the rehung galleries on the fifth floor and once again it concentrates on Duchamp and his Dadaist confreres. Appropriately, it has been installed according to chance. The melody that wafts through the gallery is one of Duchamp’s earliest uses of chance: the 1913 “Erratum Musical,” composed (for three voices) by drawing notes from a hat. Following suit, the curators established the sequence of the works on view by drawing their titles from a hat, too. It looks surprisingly normal except for the wince-worthy placement of two wall vitrines side by side.

A Modern Media World This photography gallery now centers on images commissioned for magazine ads, book illustrations and social documentation, and later elevated by MoMA to art. (The display offers the relatively humble publications in which they originally appeared.) The numerous photographers include Paul Outerbridge, Germaine Krull, Andre Kertesz and Tina Modotti, whose exquisite “Telephone Wire, Mexico,” from around 1925, is both spiritual and abstract. Also on view is a sleek black Bakelite radio the size of a small tombstone, designed in 1933 by Serge Chermayeff.

Abstraction and Ornament This gallery offers the most surprises with a dense presentation of some of the wonders of the museum’s holdings in early modernist design. An imposing cluster at the center of the gallery includes a 1927 wall hanging in a syncopated geometry of white, black and gray by Anni Albers; a large window grille — possibly for a store window — in sinuous ribbons of wrought iron by Antoni Gaudí; two colored glass windows by Frank Lloyd Wright; and an elevator grille from the Chicago Stock Exchange designed by Louis Sullivan in 1893 that points the way to the lean, playful elegance of Alexander Girard in the 1950s.

When the entire museum was reshuffled last year, the fourth floor galleries too often resembled a lot of art in search of a curator, but the 2020 revisions here mostly click.

Everyday Encounters As before, the first gallery concentrates on postwar American, European and Japanese artworks from the 1950s and early ’60s, at the nexus of performance, painting and popular culture, but it achieves a better balance. It tilts away from American father figures like Jasper Johns and Robert Rauschenberg — though they too look perfectly impressive here — toward artists of recent renown. Especially prominent are the radical painters of the Japanese Gutai group: Atsuko Tanaka (who performed with light bulbs and gives abstract painting a similar electricity); Kazuo Shiraga, who painted exclusively with his feet; and the lesser-known Tsuruko Yamazaki, whose wild little abstraction in aniline dye on tin is a recent acquisition.

Carolee Schneemann’s “Four Fur Cutting Boards” (1962-63), a dynamic kinetic sculpture that is also a painted screen and stage backdrop, was acquired in 2015 but is being shown for the first time since then, and is a sly riff on Mr. Johns’s and Mr. Rauschenberg’s efforts. The gallery’s percussive soundtrack comes from Cecil Taylor’s 1968 video, “Les Grandes Répétitions,” which shows this great jazzman improvising madly at the piano, supported by several instrumentalists.

Gordon Parks and “The Atmosphere of Crime” This gallery replaces an exhibition of abstract photography with one of the most disturbing displays in the reshuffling for its combination of beauty and malevolence. At its center is the series of dark, gorgeous, dour and heart-rending color photographs that Gordon Parks shot for a 1957 spread in Life magazine challenging stereotypes of criminality. Shot in prisons, police stations, dank hallways, and dodgy streets, they uncover the institutional evil central to this country and its impact on marginalized people. Surrounding photographs document multiple American tragedies: Oswald and Ruby, Ted Kennedy’s car floating by the bridge to Chappaquiddick Island; and Ethel and Julius Rosenberg on their way to jail.

Domestic Disturbances This gallery, focusing on Pop Art, is far less discombobulated than its previous iteration, corroborating more convincingly the internationalism that is a recurring subtext on this floor. Tom Wesselmann’s scaled up “Still Life #57” (1969-70) is one of his best installation paintings, not least for containing no nudes. It is in dialogue with Noah Purifoy’s “Unknown,” a balletic assemblage-painting in which a parasol armature radiates across saturated bands of green, yellow and red. To the other side stands Beatriz González’s “Lullaby,” a metal baby crib, painted enamel green with an appropriated image of mother and child. Also part of the improvement: works by Thomas Bayrle, Betye Saar, David Hockney and Henry Darger.

Touching the Void This gallery stresses a stripped-down abstraction in two- and three-dimensions that the label refers to as “a poetics of bare form” practiced by artists from around the world, and called Minimalist in this country. Look for Lee Ufan’s luminous brush strokes, Simon Hantaï’s ingeniously tie-dyed allover field of color and several works by the great Gego (Gertrud Goldschmidt) which lead off a field of 15 artists, of whom only three are American.

The rehang in this section diverges from the upper floors in that all the art was removed and the curators began with a clean slate, assembling cohesive arrangements of work primarily from the 1980s and ’90s in four themed galleries.

The Sum of All Parts centers on art as incremental evidence of the body moving through life with works by Sue Williamson, Adrian Piper and the astounding video veteran Theo Eshetu.

Assembly Here, the assemblage tendencies of the American artists Cady Noland, Jimmie Durham and David Hammons are pitted against one another. All work with different found objects to consider aspects of their country’s history and peoples.

After the Wall The section’s largest gallery delves illuminatingly into art made mostly in Europe after 1989. Sigmar Polke and Günther Förg are here. Less familiar names include the painter Mladen Stilinovic and the mail artist Guillermo Deisler.

Search Engines Here we see a range of reactions to the digitalization: its embrace in the work of Seth Price, and its rejection in the enticing collages of Wangechi Mutu and the hand-decorated postcards exchanged by Giorgia Lupi and Stefanie Posavec.

A certain grimness at once visual, conceptual and relentlessly earnest prevails. It can all be hard to take upon first encounter. (When I first walked through, the phrase “hair shirt” came to mind.) But these are inordinately grim times and nearly all the works are exceptional and make sense at MoMA.

This section concludes with two works in their own galleries. One is Carrie Mae Weems’s “From Here I Saw What Happened and I Cried,” a magisterial meditation, now a quarter-century old, on enslavement using 19th-century photographs of African-Americans sharpened with her own incantatory words. The other is Cao Fei’s 2006 video, “Whose Utopia,” of Chinese workers demonstrating hobbies like ballet and guitar-playing in the immense factory where they work. It is a sad, yet inspiring argument for the persistence of art, and, by implication, love, in the face of industrialization and alienation. Both works may be even more pertinent now than when they were made.

Dealing with the recent past and the present, the second floor points toward the future, most confirming the collection as a living laboratory rather than a great mausoleum — now an open-ended organism always in formation and reformation.

One leaves the Modern realizing that the collection has become a project on which the sun never sets.At any time someone, somewhere in the museum, will be plotting the next rotation, bringing the museum much closer to the speed of art and curatorial thought. It is almost overwhelming to contemplate what these changing displays might bring forth, moving forward.

Giovanni Pernice girlfriend: Is the Strictly star in a relationship?

Kylie Jenner Reveals What She’d Be Doing If She Wasn’t Famous: I Should ‘Do This On The Side’
Entertainment