The Painter Alvaro Barrington on the Art He ‘Steals’ From

LONDON — On a drizzly June morning, the artist Alvaro Barrington led visitors around his new London exhibition. There was only one work by him in the entire gallery.

“Artists I Steal From” at Galerie Thaddaeus Ropac in Mayfair is a selection of paintings, drawings, sculptures and photographs by 49 artists who have influenced Mr. Barrington. The New York-based painter incorporates textiles, stitching and sewing in his work. His lone piece in the show, “Unc You the Plug” (2019), is a painting on burlap of a square-shaped head stitched with yarn.

The artists he “steals” from include Abstract Expressionists (Willem de Kooning, Cy Twombly) and masters of color (Robert Ryman, Howard Hodgkin), African-American painters (Henry Taylor, Jacob Lawrence) and female pioneers (Louise Bourgeois, Agnes Martin). The show, which runs through Aug. 9, is spread across two levels of Ropac’s London headquarters, a grand Mayfair mansion that once housed a bishop. On the upper level are stacks of art books Mr. Barrington owns.

The exhibition grew out of a visit by Ropac’s senior global director of special projects, Julia Peyton-Jones, to Mr. Barrington’s New York studio. He told her then that he dreamed of exhibiting artists he loved. 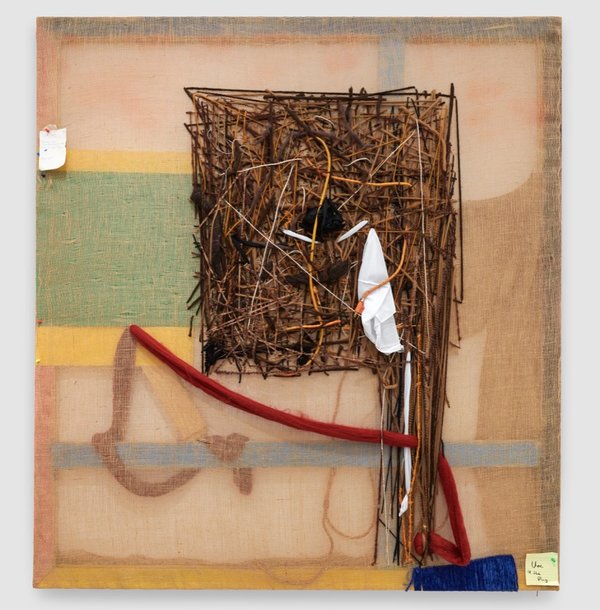 “I always think it’s a very interesting process to look at art through the eyes of an artist,” Ms. Peyton-Jones said.

Describing Mr. Barrington as “incredibly knowledgeable” and “a very interesting mind,” she noted that he was constantly going to museums and exhibitions. “It’s really part of his process of being an artist,” she explained. His art is “what he does with all that looking.”

For a reporter, touring the London show with Mr. Barrington felt at times like a very personal art history lesson. Certain works inspired particularly emotional commentary. Pointing to Philip Guston’s small 1968 acrylic of a high-heel ankle boot, Mr. Barrington noted that Mr. Guston used painting as a way of “dealing with his own anxieties.” Standing before a lined 1965 oil-and-pencil canvas by Ms. Martin, he recalled that she drew very straight lines to clear her mind during a period of mental illness. “You couldn’t get deeper than her,” he said.

(Works by Ms. Bourgeois are among those being shown at the Masterpiece fair, through July 3 at the Royal Hospital in Chelsea.)

Another admired artist, the German painter Anselm Kiefer, was present in the flesh, gazing at the works on the wall (none were his). After stopping to greet him, Mr. Barrington settled in the gallery’s living room to talk about his life and career.

Now 36, Mr. Barrington was born in Venezuela. His Haitian father was a construction worker by day and a D.J. by night, and his mother was a nanny. When he was a year old, he moved to Grenada to be raised by his grandmother and aunts while his mother worked in the United States. His aunts “were the ones who kept me in line,” he recalled. “I was a really, really bad kid: no discipline. I would cut school, play soccer — there’s probably too many things to talk about.”

It was an idyllic life of trips to the beach, outdoor activities and a society “where everybody knows everybody,” he said. When he cut class, a stranger would walk up, ask him who his family was and take him back to school. “There was a sense of protection and community,” he recalled. “When you go to a place like America, one of the first things they tell you is, don’t trust strangers.”

When he was 8, he moved to New York with his mother and settled into Flatbush in Brooklyn, where the Caribbean lifestyle of his neighborhood reminded him of home. He was simultaneously immersed in hip-hop culture, a major formative influence. Yet the little boy also witnessed violence and the crack epidemic at its worst. Did he like the United States? “I love-hated it, which I still do,” he said.

When his mother died two years later, he was left in the care of his stepfather and his mother’s friends — nannies who found the time and resources to keep him in New York, fulfilling what they said they believed were his mother’s wishes.

His penchant for art became apparent early on. “I was the kid in my neighborhood who was drawing, who was designing quilts for people, who was making stuff,” he said.

Recommended by teachers, he attended LaGuardia High School of Music & Art and Performing Arts and spent 12 years in college, mostly at Hunter in New York. “If somebody mentioned a name or a political ideology and I didn’t understand, I would try to find a class,” he said. When he received his bachelor’s degree, he said he had 244 credits — more than twice what was required.

“A lot of my time at Hunter was spent copying artists that I loved and hated,” he recalled. “It was sort of my way of understanding what they were doing. It was a way of looking, learning, making, in a sort of circle.” In 2015, he moved to London to study at the Slade School of Fine Art.

After graduation, he initially produced “didactic art” consisting of signs and inscriptions. He then began embracing, and evoking, his life experiences. His art incorporates sewing, which he watched his Grenadian aunts do; fabric, such as the hemp used to make cocoa sacks; and the hibiscus flower. It also reflects the influence of the innumerable artists he has studied, admired and emulated.

Mr. Barrington says his mission is to demonstrate that black culture is central to the history of art and not an exotic side show. Mark Rothko “was going up to Harlem to listen to jazz,” he said. When Henri Matisse made a line drawing of a jazz subject, he was not “imagining it,” but rather “having a conversation with these great jazz musicians” whom he met on trips to New York.

Art has “always been about an exchange,” Mr. Barrington said. “And unless you tell that story in an accurate way, you’re doing these communities an incredible disservice.”