I was facing some shadows in my life. Could singing with others help me reclaim my voice and calm my fast-beating heart? 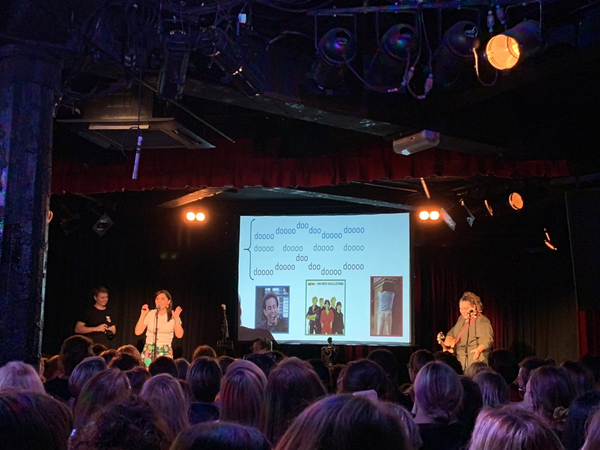 Years ago, I took to the stage with the Royal Melbourne Philharmonic Choir. We sang Handel’s Messiah, Fauré’s Requiem and the Dream of Gerontius in the Town Hall. There I was, my feet in sensible shoes, sweat staining my crisp white shirt, singing my little heart out in front of the giant organ. I still have a tape recording of that performance somewhere, where I swear I can hear myself singing, high and thin and possibly off-key.

But life got in the way and I stopped singing. Then, in the summer of 2019, well before the dark pandemic clouds of 2020 arrived, I found myself facing some shadows in my own life. It felt as if it had been a long time between songs, as if there was something unsung, some absent music in my ears.

I’d begun to worry about my excess ruminations, fearing I might be making myself ill.

Worrying about ruminating: A riff playing off a theme, like one note canceling out another. I could sense the years of my life diminishing with the escalation of my panic; a diminuendo, playing to a crescendo. Perhaps I needed to get out of my own head? I had been reading Anne Lamott, who writes in “Bird by Bird,” her book on writing: “To be engrossed by something outside ourselves is a powerful antidote for the rational mind.”

Could singing help me reclaim my voice and calm my fast-beating heart? Studies of the neuroscience of music and singing find that “music has profound effects on the emotions … inducing states of relaxation which are particularly useful as an antidote to depression, anxiety and fatigue.”

In addition, research from the Royal Society noted that “group singing can improve physical and mental health, as well as promote social bonding.” An older paper by researchers from the University of California suggests that participating in choral singing “is associated with strong increases of Immunoglobulin A,” also referred to as immunoenhancement. They tested cortisol and immunoglobulin levels in saliva before and after singing in a choir, and found that performance singing “leads adaptively to levels of positive feelings and satisfaction.”

So, rather than letting my unsung tunes strangle me, I decided to take on some new choral experiences, one being the Big Feminist Sing, a community choir, and the other Pub Choir, the sold-out phenomenon, which was on national tour.

I fronted up alone to the Big Feminist Sing, a choir full of strangers singing love songs for Valentine’s Day — which, where I live in Australia, fell on a hot day in the middle of our summer.

The choir director, Jane York, started the choir in 2018 on a whim, with a call-out on Facebook for any interest in an inclusive choral get-together. She wrote in a blog post that she wanted to “make a physical space for catharsis. To express vulnerability, anger, humour; to be fierce, silly and soulful. I wanted to be unapologetically critical of our leaders, cultural values and institutions. I wanted to build community.”

For my first session, I arrived at a primary school and headed upstairs to the rehearsal room. Chairs and a lonely guitar awaited us, and the hot western sun was beating in through the glass. I felt myself starting to panic.

“Maybe everyone knows each other and I’m a random ring-in. What if they can hear me sing, and I’m singing off tune?” I thought. I ran to the rooftop — a fenced-in playground — and breathed in, looking out across the golden suburb of South Melbourne toward the city and the bay. 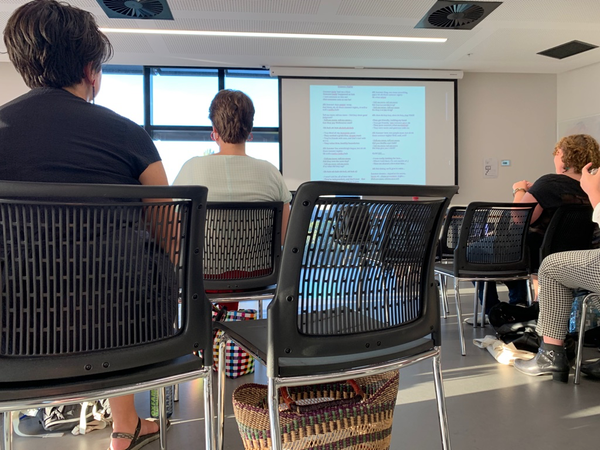 Back downstairs for start time, I sat apart, taking cover in a sliver of shade, sweating and trying to find where I fitted into this room and this crowd. It was so hot. I stripped down to my tank top. I was going to have to let it all hang out, wrestling with my fear of exposure.

Up on the overhead screen, the lyrics were slightly out of focus. We started singing words which then disappeared before me.

My anxiety began to ease as the group found its equilibrium. The warm-up song was a merging of three tunes. Our voices: ripples above, below and transcending, as we worked Don Henley into Blondie into Sting. Boys of Summer/Hanging on the Telephone/Every Breath You Take.

Then we moved into a gender-nonspecific version of “Summer Nights,” with the lyrics changed so we were singing about vegan roasts, personal boundaries and the concept of “Netflix and chill.” Personal pronouns were interchangeable, optional and flexible. I mixed mine up from one verse to the next. Hey, why not? I was loosening up, and loving it.

And as we found our voices, we started on Madonna’s “Express Yourself”: “C’mon, girls, do you believe in love?” we sang, complete with a solo dancer flashing her bra and gyrating. “Next time,” I thought, “maybe I could do a solo?” I felt half serious — maybe, one day, I could do a solo. With this group of people I had never met, I felt safe and in good hands.

We sure had built a community, a “physical space for catharsis.” A few weeks after my Big Feminist Sing, I went off to Pub Choir, the global singing gig that packs out pubs, hotels and concert halls from its birthplace in Queensland to New York and Los Angeles.

“Everybody can sing and Pub Choir is here to prove it,” the promo had claimed. Their deal: “No audition, no solos, no commitments, no sheet music, NO WORRIES … Music belongs to everybody.”

Down in the main bar, the crowd was divided into three sections: mid ladies; high ladies; and low voices. The mid ladies — of which I was one — were characterized as dependable sorts: your designated driver, your organized planner, that kind of personality. The high ladies were categorized as showy, attention-seeking and overdramatic. The dramatic playoffs continued across the course of the evening, with the mid ladies singing dependable monotone lines while the high ladies hurled themselves into a hot mess of melody.

Meanwhile, the blokes, who accounted for about 80 out of the 800 singers there, were told to “clench” to get their voices to those higher notes. The choir director, Astrid Jorgensen, not only put the lyrics up on a screen, she served up animated gifs to convey the required singer emotion. At some points, I was laughing so much I couldn’t sing, but luckily, in a crowd that large, there was a lot of cover.

“If you don’t know what to sing,” Ms. Jorgensen said, “find someone who looks confident, and go and stand next to them. As in life.” Find a friend if you’re in trouble; take a risk; use your voice; be part of something bigger than yourself.

In that pre-pandemic time, I rode home in a packed train carriage on a high, chatting to new mates, and singing. I went to those choirs with a throat tight from swallowing my voice. I found my part, blended in and sang the lyrics.

I’m not sure what my cortisol and immunoglobulin readings would have been, but I knew I felt better. Having walked into those rooms gulping, I had found the uplift of voices.

I’ve been singing in a choir ever since — even on Zoom during the pandemic, because it isn’t safe to sing in person now — and each rehearsal is a lifeline, a connected thread, an intake of air working toward a collective voice. It didn’t matter if I was a bit off-key to start with. Decades of unsung tendrils had unfurled, and I had flown.

Anna Sublet is a Melbourne writer who blogs at Notes of Substance.