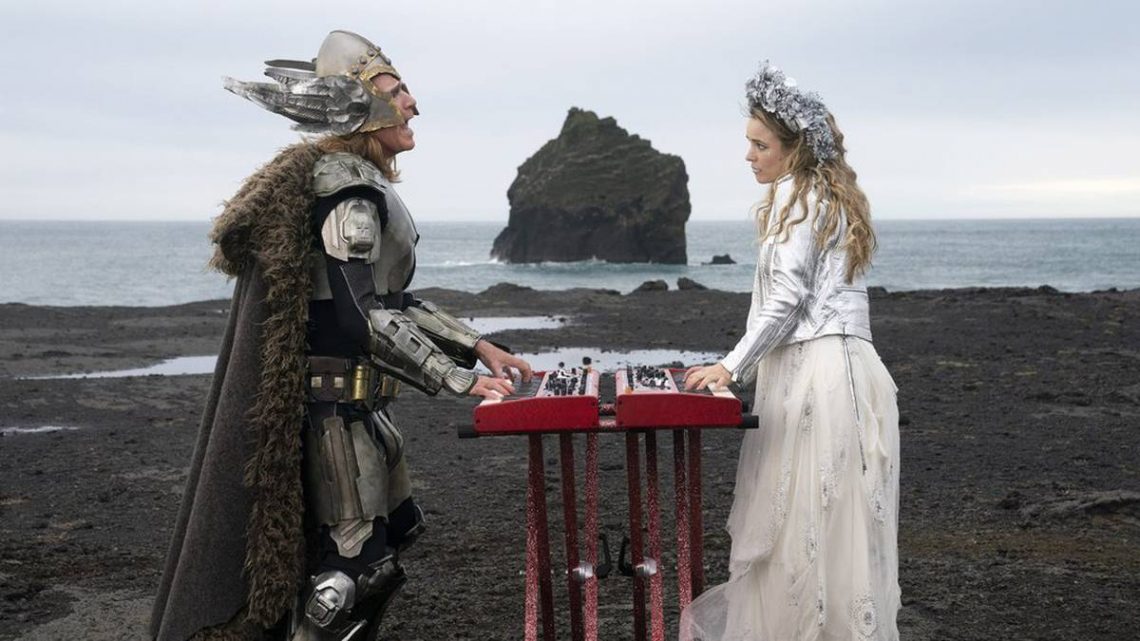 The writers behind the Oscar-nominated song ” Husavik (My Hometown) ” knew they wanted it to be an emotional core to the otherwise silly Will Ferrell movie “Eurovision Song Contest: The Story of Fire Saga”.

But they had no idea just how significant the ballad would become to the people of the small Icelandic town it’s named after — especially considering the fact they’ve yet to visit. And yet in the past year, the people of Húsavík, a town of only 2300, have staged a grassroots Oscar campaign on behalf of the song and adopted it as a de facto local anthem.

Children are taught it in school. It’s been sung at the local retirement home, in church and blasted over the loudspeakers before soccer games. One council member is gearing up to paint the main street red (as a red carpet) for the Oscars on April 25. Húsavík is even considering opening late in the day after so residents can stay up to watch the ceremony, which starts at 2am local time.

“It’s such a beautiful song about our town,” said Örlygur Örlygsson, the local entrepreneur behind the campaign. “It lifted the spirits of the people so much. People became optimistic that we would get somehow through this thing.”

The song itself was a bit of a wild card. Anyone who has seen director David Dobkin’s loving spoof of the Eurovision contest knows it doesn’t exactly take itself seriously. Plopping a sincere ballad at the climax was a gamble.

“We were a little worried about getting to that one,” said Savan Kotecha, who co-wrote the song and executive produced the music in the film. “The other ones were super fun and funny songs and up-tempo. David’s dream was to have this emotional moment at the end. But he felt we had to earn it.”

Kotecha, a Grammy-nominated songwriter and producer who has worked with Ariana Grande, The Weeknd, Ellie Goulding and Katy Perry, enlisted what he calls the “Swedish songwriting mafia” of Rickard Göransson, who he’d collaborated with on Grande hits “Bang Bang” and “God Is a Woman,” and Fat Max Gsus to help.

Göransson was sold at the mention of Will Ferrell, but also said he and Max, “Felt like this was something that we can relate to.”

Neither had ever specifically written a song for a musical film before, but they enjoyed the process and the back and forth with the director. Here, they’d been tasked with giving Rachel McAdams’s character, Sigrit, an emotional showstopper — the climax to her journey with Ferrell’s Lars. Swedish pop singer Molly Sandén provided the vocals.

“What we really wanted to do was to really channel what she was feeling and what she would have written in her lonely hours in her hotel room,” Gsus said. “I was facing some rejection at the time and I was kind of in a rough patch so it was easy to tap into that emotion.”

It’s effectiveness even changed the trajectory of the scene.

“The original thought was to have a comedic moment,” Kotecha said. “They didn’t know that they would get a song that really spoke to the heart of the movie.”

When the movie came out on Netflix a few months into the global shutdowns last June, it had its critics and supporters, but the people of Húsavík quickly became its most passionate fans. Yes, even with all those jokes about magical elves.

“We like to make fun of ourselves,” Örlygsson said. “We are just happy that Hollywood chose to do it as well.”

Although it was always a big deal to have a major Netflix production set in their little northern coastal town, it took on an extra significance after Covid-19 devastated their main industry, tourism. And sometime after the movie came out, Húsavík started seeing an uptick in domestic visitors who were unable to travel abroad. Many cited the film as the reason for their visit. Almost immediately Örlygsson, who also runs a small hotel, opened a Jaja Ding Dong café on a terrace outside in honor of one of the film’s sillier recurring songs to capitalise on the moment.

The song itself became immediately popular in the country, too. And the “Eurovision” glow was extended when “Husavik” popped up on the Academy’s shortlist of potential original song nominees earlier this year. The townspeople immediately sprung to action.

“We decided to do whatever we could to help. We set up a website, we made a campaign video,” Örlygsson said. “A lot of people, especially the young folks in town, were heavily involved.”

The video, An Óskar for Húsavík, has been viewed more than 70,000 times on YouTube and been featured in The New York Times and on Good Morning America. It’s the kind of grassroots publicity that studios dream about. Netflix is even donating some of the props from the film for an exhibition in the local museum as a thank you, including the elf knife.

The songwriters were beside themselves that the ballad meant so much to the townspeople.

“It was kind of like when you declare your love to someone and that moment when they actually respond,” Gsus said. “It was like tickly, butterfly love.”

That there’s now an Oscar nomination too is simply surreal.

“As a lover of movies and film and everything, it’s so crazy and amazing to be recognised in that world, because it’s a world in which I don’t usually live,” Gsus added. “It’s absolutely fantastic.”

They’re up against “Speak Now” from “One Night in Miami,” “Io Si (Seen)” from “The Life Ahead,” “Fight for You” from “Judas and the Black Messiah” and “Hear My Voice” from “The Trial of the Chicago 7.”

Everyone’s Oscar night plans are in a bit of flux as the pandemic continues. Göransson is in Los Angeles but both Kotecha and Gsus are in Sweden and, as of this interview, were unclear how they were going to participate.

They people of Húsavík are also doing what they can while still adhering to the restrictions. Ideally they’d have had a big town party. Now it’s likely just gatherings of 10 or less.

And everyone knows that despite the efforts and the passion, anything can happen on Oscar night. But one thing is certain: As soon as they can, Göransson, Gsus and Kotecha are making a trip to Húsavík.

Stretch Marks Happen. Why Do Women Have to Love Them, Too?