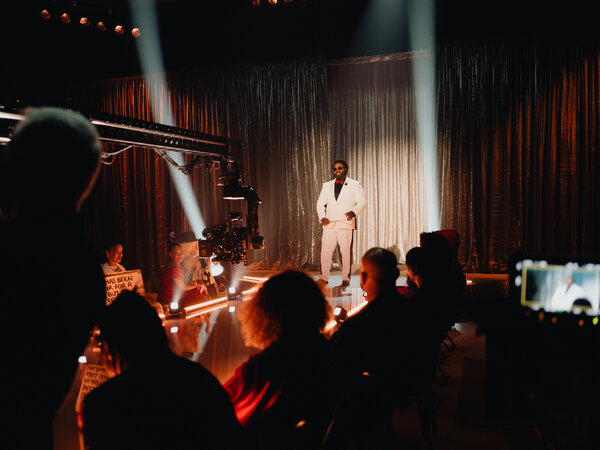 LOS ANGELES — “He has kaleidoscope vision that impairs his precision. … ”

It’s November 2020, and Diallo Riddle and his creative team are crafting material for the second season of “Sherman’s Showcase,” the musical comedy series he created with his writing partner and co-star, Bashir Salahuddin. They are punching up the lyrics to “Diamond Eyes,” a James Bond-spoofing theme song about a movie villain with a few too many quirks.

The dozen comedy writers and staffers, seated six feet apart from one another beneath a large tent erected in a Santa Monica parking lot — a Covid-compliant writers’ room — are shouting out suggestions that are muffled by face masks. They giggle and clap as the ideas grow increasingly ridiculous.

“His jawbone is glass and he has dashikis. … ”

This kind of unabashed goofing and pop culture deep-diving are what endeared audiences and critics to “Sherman’s Showcase” when it debuted on IFC in July 2019. The show presents a parallel universe in which the fictitious media mogul Sherman McDaniels, played by Salahuddin, has for decades hosted a musical variety show that rivals “Soul Train.”

Sherman, an Afro-sporting megalomaniac, spends each episode paying tribute to himself — rolling snippets of his low-budget films and TV shows, plugging products and showing highlights of his past musical guests (parodies of artists like Mary J. Blige, Prince and Blondie). A Black History Month special, which aired in June 2020 (yes, the summer airdate was part of the gag), further solidified Riddle and Salahuddin’s comedic brand of jubilantly sending up and celebrating Black culture.

More than three years after it debuted, “Sherman’s” is finally back, returning to a world that, though well past the direst days of the pandemic, could still very much use a laugh or two. Although Covid-19-related issues were primarily responsible for the show’s long hiatus, when Season 2 premieres on Wednesday, with two episodes on IFC and AMC+, it will treat the intervening years as if they never happened.

Preferring to focus on the fabled world of Sherman, as part of their overall goal to make a show that feels timeless, Riddle and Salahuddin stuck to their Season 1 approach of almost entirely eschewing real-world issues. (They save their more topical humor for their other joint venture, the HBO Max sitcom “South Side.”) The entire new season of “Sherman’s” includes only one Easter-egg allusion to Covid.

Of course, when it came to actually making the episodes, the real world kept getting in the way.

On that November afternoon in 2020, the day’s to-do list included dissecting popular ’90s hip-hop songs for a posse-cut bit and working out the kinks in a Jodeci-inspired R&B jam. Covid protocols had limited studio time, so some songs had no vocals yet. When there were no instrumental tracks, Riddle created beats by banging his hands on the table and simulated horns with his mouth. The season’s final writing session was scheduled for the next day.

“We’re 100 percent shooting in the first three weeks of February,” Riddle said energetically as the writers started to break for lunch. His declaration was partially correct — if you add a year.

Riddle and Salahuddin met while attending Harvard University in the 1990s and honed their writing skills working at “Late Night With Jimmy Fallon.”

Drive into Halloween in style | The Sun
Entertainment