Samantha Bee Decries Trump’s ‘Stand Back and Stand By’

A Little Too Proud

The late-night hosts on Wednesday took aim at President Trump, who refused to denounce the Proud Boys, a far-right group linked to white supremacy and violence, in his debate with Joseph R. Biden Jr. on Tuesday. Instead, Mr. Trump told the group to “stand back and stand by.”

“Do not tell Trump that he can say anything he wants about race,” Samantha Bee said on “Full Frontal.” “Not only will it be wrong and deeply offensive, but Mark Burnett will have to spend hours erasing the tapes.”

“Wow, there you have it, folks. Trump had an opportunity to be like, ‘White supremacists, I don’t [expletive] with you.’ Instead he’s like ‘Stand by, guys. I never know when I’m going to need you.’” — TREVOR NOAH

“‘Stand back and stand by’ is a horrifying thing to say to a group of white supremacists, even more horrifying than when Trump yells it out to the Secret Service as he’s waging war on the Air Force One bathroom.” — SAMANTHA BEE

“Like, no president should ever have to be pressured this hard into condemning white supremacists. It’s the easiest thing. Trump did it so grudgingly, he was like one of those guys who refuses to make real apologies. [imitating Trump] ‘What? I am supposed to apologize for tailgating at your dad’s funeral? Fine, I’m sorry — I’m sorry that you’re unable to have a good time.’” — TREVOR NOAH

“Yeah, it’s not good when you ask the president if he’ll condemn white supremacy and the ‘Jeopardy!’ music starts playing in his head while he thinks it over.” — JIMMY FALLON

“That’s not denouncing — that’s troubling. That’s like when the debate moderator asked Nixon to denounce psychotic thrill-kill cults, and he said, ‘Manson family, stand back and stand by. Have you seen the little piggies crawling in the dirt? Helter skelter! Helter skelter!’” — STEPHEN COLBERT

“The president’s choice of words was so inspiring to these racist numbskulls that today the Proud Boys started selling merch with their new catchphrase. A good indication that you didn’t properly denounce someone is when they make your denunciation their new slogan. That’s why Joe McCarthy never wore a T-shirt that said, ‘At long last, sir, have you no decency?’” — STEPHEN COLBERT

“And by the way, you know that you’ve truly botched your condemnation of a hate group when that hate group says, ‘Thank you for the endorsement.’” — TREVOR NOAH

“I would be careful if I were the Proud Boys, though, because if there is one thing we know about Donald Trump, it’s that once he invests in you, you have about five years until you go bankrupt.” — TREVOR NOAH

“The only thing he avoids more than condemning white supremacists is paying taxes.” — TREVOR NOAH

“Trump wouldn’t condemn white supremacy groups even when they pressed him. I mean, for a guy on his third marriage, I didn’t expect him to be this loyal.” — JAMES CORDEN

“Last night’s debate was over an hour and a half of very little substance but a lot of yelling. It was the first time I felt grateful I can’t spend Thanksgiving with my whole family this year.” — SAMANTHA BEE

“Actually, debate is not the right word. It was more like a collective brain hemorrhage.” — SETH MEYERS

“Watching that debate was like hot-boxing a port-a-potty with crystal meth. In Phoenix. In July. It was like being hit on the head with a lead pipe in a room filled with nitrous oxide. It was like watching a two-person performance of ‘12 Angry Men’ where one actor played one part and one was mad enough for the other 11.” — SETH MEYERS

“It’s not a good sign when the presidential debate gets the same reviews as ‘Cats.’” — JIMMY FALLON

“Trump was out of control the entire evening. The whole thing gave a new meaning to the term ‘white noise.’” — STEPHEN COLBERT

“Honestly, it seemed less like a presidential debate and more like a fight that you overhear in a booth at Denny’s.” — TREVOR NOAH

“Seriously, it was like watching ‘The View’ on bath salts.” — JIMMY FALLON

What We’re Excited About on Thursday Night

The “S.N.L.” star Cecily Strong will reunite with her former castmate Seth Meyers on “Late Night.” 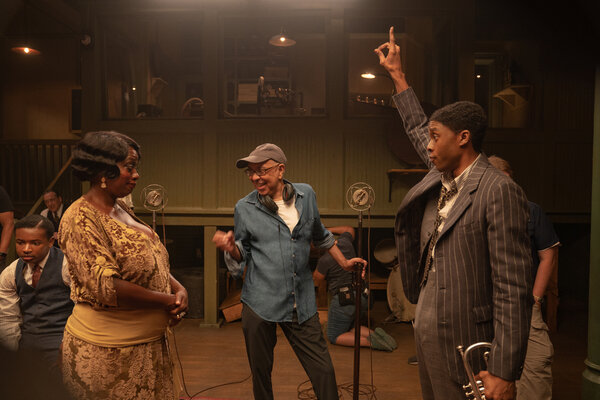 Chadwick Boseman delivers one of his finest performances in his final role opposite Viola Davis in “Ma Rainey’s Black Bottom.”

KFC's Wow Box is back and you can get a burger, chicken and chips for £3.50
Entertainment

Can I travel between tiers and can tier 2 travel to tier 1? Latest Covid lockdown rules and restrictions
We and our partners use cookies on this site to improve our service, perform analytics, personalize advertising, measure advertising performance, and remember website preferences.Ok