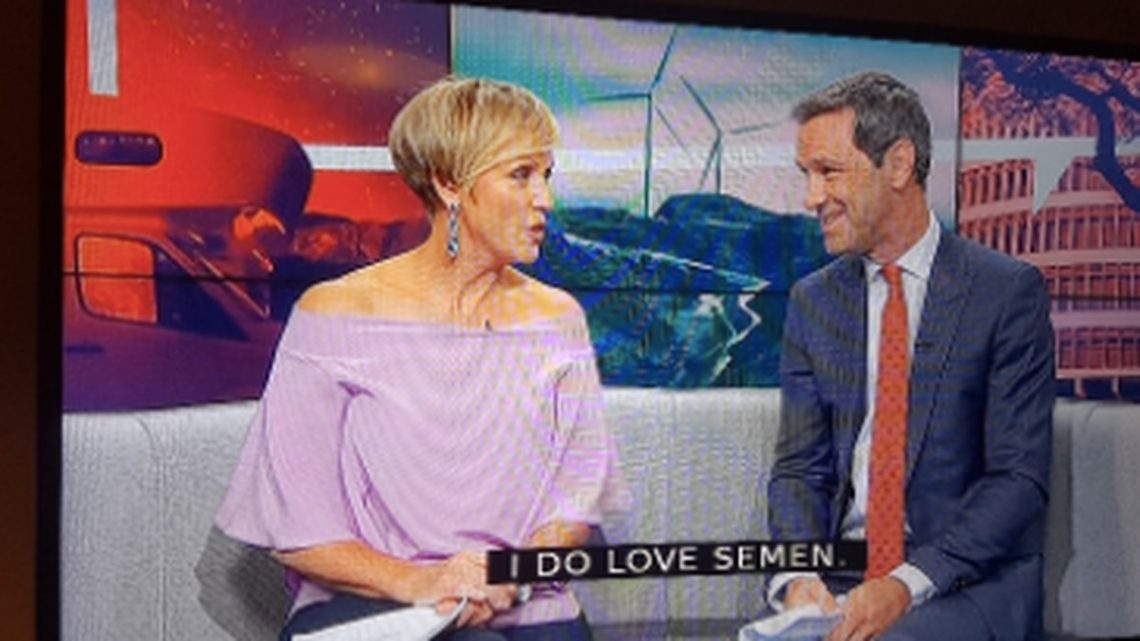 Hilary Barry has taken to social media to clarify what she meant during a Seven Sharp segment last night, after the closed captions gave viewers a much different message to what she had actually said.

During a segment about a new breed of salmon in the Tasman region, Barry commented to co-host Hadyn Jones that she loves salmon.

For those who relied on subtitles to hear the programme, the message was considerably different. The caption showed up on the screen as: “I do love semen”.

A viewer spotted the X-rated mistake in the caption and tweeted a screenshot of it.

“I feel Hilary Barry might need to have a word with the subtitle people,” the Twitter user wrote. “To clarify she loves salmon.”

The Seven Sharp host retweeted the tweet, which included an image of the X-rated caption, and clarified: “SALMON!! I LOVE SALMON!!!”

The gaffe is likely the result of auto-generated captions failing to understand Barry’s Kiwi accent.

Other Twitter users pointed out that fact, adding they now wonder what other people thought they meant when they mentioned words like “salmon” in their travels.

“I am thinking over all the times I might have talked about loving salmon in my Kiwi accent while travelling…” one person tweeted.

On top of the subtitle gaffe, Barry was also wearing an off-the-shoulder style top, a style which has seen her receive numerous criticisms from people who think what Barry wears is any of their business.

“Barbara is going to have a stroke over this one,” one person pointed out. “Bare shoulders AND semen.”

It was a busy day for the TV host on social media as, just earlier in the day, Barry admitted both online and on The Hits 3pm Pick Up show, that she had been misunderstanding Harry Style’s “Watermelon Sugar” song this whole time.

“The young people at work told me what the watermelon was in that Harry Styles song and now I’m too embarrassed to sing along,” she tweeted.

“And to think I thought it was so lovely and innocent for a nice young man like Harry to write a song about fruit,” she added.

Family of Lady Gaga’s Dog Walker Releases Statement, Thanks Her for the Support