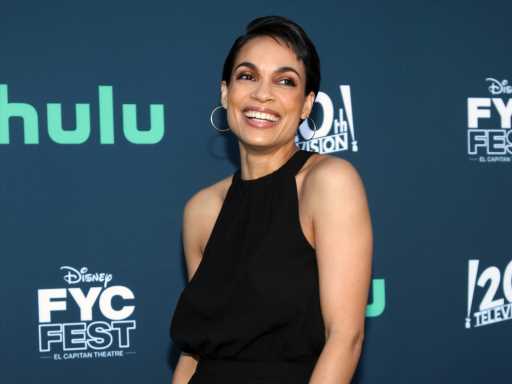 Rosario Dawson sure knows how to blow up the internet and reveal a blossoming romance in a very cute way. The Mandalorian star took to Instagram to share a loving video of her with reported new boyfriend, Nnamdi Okafor — and if you listen carefully, that is where the real confirmation comes in.

The 43-year-old actress shared the clip from the Chicago Comic & Entertainment Expo, where she and Okafor were riding in the back of a golf cart. The romantic duo was adorably mugging for the camera when the Nigerian poet sweetly said, “I love you, baby.” She responded right away with, “I love you, too” as they looked deeply into each other’s eyes. The video speaks for itself, and Dawson didn’t need to add a caption, but she did place a heart emoji in the post. It’s not known how the couple met, but they’ve stayed off the Hollywood relationship radar until now.

Dawson was last dating New Jersey Senator Cory Booker, but they broke up in February after almost three years (and a presidential campaign) together. Their split seems to be amicable, though, as the politician “liked” her post with Okafor, so he’s obviously giving his blessing to her new relationship. Booker and Dawson spent most of their time navigating a long-distance relationship between Los Angeles, Newark, and Washington, DC, which is never easy.

It’s nice to see that her ex-boyfriend wishes her well in the next chapter of her personal life — and it looks like Dawson is living happily in a love bubble with her new beau.

Before you go, click here to see celebrity exes who will always be friends.