Roberto Burle Marx and His Leafy Vision of the Tropics

This Friday in Rio de Janeiro is the shortest day of the year, the start of a winter that, by New York standards at least, gets only a little bit nippy. Here, though, the hot days have arrived, and up in the Bronx, the sun-starved among us have all summer to immerse ourselves in a southern hemisphere Shangri-La.

“Brazilian Modern: The Living Art of Roberto Burle Marx” has taken over the New York Botanical Garden — and offers an exuberant gust of tropical modernism that will thrill anyone caught in the concrete jungle. Burle Marx, Brazil’s greatest landscape designer, hasn’t lacked for institutional attention lately; just three years ago the Jewish Museum presented a retrospective of his paintings, tapestries, jewelry and designs for green spaces and public thoroughfares in Rio, Brasília, and even Miami. But that show could not offer what this one does: a full-scale, fragrant, enchantingly lush garden, complete with numerous flowering plants and philodendrons that Burle Marx himself first identified.

Along with Lúcio Costa and Oscar Niemeyer, the master planners of Brasília, Burle Marx (1909-1994) is the designer most responsible for our utopian impressions of the Brazilian built environment, with its superstructures of swooping concrete ringed by profuse green expanses. The garden here in the Bronx (designed by Raymond Jungles, a Miami-based protégé of Burle Marx) does not replicate a single Burle Marx design, but fuses the horticultural signatures of his more than 2,000 parks and gardens into a sort of ultra-tropical escape.

A sinuous black-and-white concrete ribbon, echoing his boardwalk along Rio’s Copacabana Beach, leads you past miniature palm trees, drooping ornamental elephant’s ears, and beds of calico plants. The flowers and plants are grouped into bright monochromatic bands — purple or green, fulvous red or Princeton orange — that undulate alongside the concrete promenade, a translation of the abstract paintings Burle Marx made as preparatory materials. By the garden’s edge, a fountain of imitation concrete mimics the curving abstraction he carved in bas-relief for the Banco Safra in São Paulo, and gurgles water into a pond below.

Many of the species are native to Brazil, notably the gorgeous bromeliads: flowering plants with rosettes of long, stiff leaves of pink, orange or green. (The most famous bromeliad? The pineapple.)

They sit in planters on the steps and nestle in the garden’s chromatic bands, while beside the conservatory’s pool are bromeliads with branching orange blooms that pierce through starchy green leaves. The catalog identifies more than 20 species that Burle Marx first introduced to horticulture — like Alcantarea burle-marxii, whose fronds of the specimen here rocket to the height of a 10-year-old child. 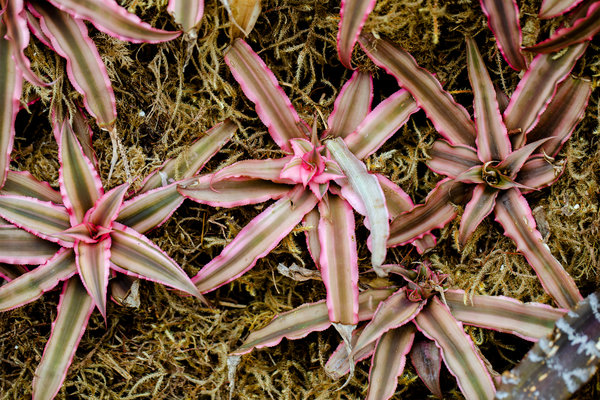 The Burle Marx show has been billed as this institution’s largest botanical exhibition ever, and it has certainly gone all in on the Carioca spirit. The speakers inside the Victorian-style Enid A. Haupt Conservatory, which contains more sensitive flowering plants, are pumping in bossa nova of a rather cheesy, hotel-lobby substrain. Outside, sandwich boards throughout the garden offer excerpts from Brazilian poetry, in Portuguese and English. (You already missed the caipirinha-fueled Pride party.)

In the institution’s library, you can see a small pendant exhibition of Burle Marx’s later paintings and tapestries, mostly made during the dictatorship of 1964-1985. Another floor promises to showcase his fabulous Rio home, known as the Sítio, though it underdelivers; it offers just a few pictures and texts, and mostly offers visitors a chance to draw azulejo ceramic tiles with blue markers and Post-it notes. And there is a display highlighting the Botanical Garden’s century-long involvement with conservation in Brazil, mixed in with documents of Burle Marx’s own explorations. A faded photograph from 1974 shows him in Amazonia, holding a newly discovered bromeliad; elsewhere you’ll find a hefty chunk of pau-brasil wood, from the tree that gives the country its name.

The timing of this beautiful show seems both apt and awkward. Apt, since the climate crisis has spurred a renewed interest among young architects in landscape design — and a recent youth craze for succulents and tropical plants has made Burle Marx look positively hip. If you have to have an Instagram-bait show, better this than the Rain Room!

Awkward, since Burle Marx did much of his major work in government settings, and these days, the Brazilian government is not especially friendly to plants. The far-right president, Jair Bolsonaro, has fired one of the country’s top environmental officials and wants to strip-mine the Amazonian rain forest Burle Marx so loved; last month, deforestation rates in the Amazon surged to the highest level ever recorded. Brasília’s Itamaraty Palace, one of Niemeyer’s and Burle Marx’s most important designs, now hosts a foreign minister who believes climate change is a left-wing conspiracy whose ultimate aim is to depress western economies for China’s benefit. The new Brazilian government’s environmental record has been so egregious that the American Museum of Natural History recently refused to host an event honoring Mr. Bolsonaro.

Walking through the show’s profuse expanses of flowering plants and stuffing my nose into bromeliad petals, I had moments when I felt irresponsible for being so happy. As Brazil traverses a seemingly endless crisis — whose latest chapter includes a record crime wave in Rio, Burle Marx’s hometown — the Botanical Garden transports us to a special, imaginary country, its culture nourished by influences from Europe and Africa and the Americas, where urban life enmeshes with unparalleled natural beauty. I love that Brazil; I want to live there; I know it doesn’t exist.

But those delirious utopias that Burle Marx designed, above all with Niemeyer and Costa in Brasília, have always been verdant visions of a future that never comes. What they can offer now, against a backdrop of what the Botanical Garden discreetly calls “acute conservation threats,” is a horizon to dream toward, a little earthly taste of a life in common. Gardens, Burle Marx thought, had that much power. “The sight of that association of plants,” he once said, “gives us the impression of a covenant for living together.”

Jason Farago is an art critic for The Times. He reviews exhibitions in New York and abroad, with a focus on global approaches to art history. Previously he edited Even, an art magazine he co-founded. In 2017 he was awarded the inaugural Rabkin Prize for art criticism. @jsf