Robert Frank, one of the most influential photographers of the 20th century, whose visually raw and personally expressive style was pivotal in changing the course of documentary photography, died on Monday in Inverness, Nova Scotia. He was 94.

Born in Switzerland, Mr. Frank emigrated to New York at the age of 23 as an artistic refugee from what he considered to be the small-minded values of his native country. He was best known for his groundbreaking book, “The Americans,” a masterwork of black and white photographs drawn from his cross-country road trips in the mid-1950s and published in 1959.

“The Americans” challenged the presiding midcentury formula for photojournalism, defined by sharp, well-lighted, classically composed pictures, whether of the battlefront, the homespun American heartland or movie stars at leisure. Mr. Frank’s photographs — of lone individuals, teenage couples, groups at funerals and odd spoors of cultural life — were cinematic, immediate, off-kilter and grainy, like early television transmissions of the period. They would secure his place in photography’s pantheon. The cultural critic Janet Malcolm called him the “Manet of the new photography.”

But recognition was by no means immediate. The pictures were initially considered warped, smudgy, bitter. Popular Photography magazine complained about their “meaningless blur, grain, muddy exposures, drunken horizons, and general sloppiness.” Mr. Frank, the magazine said, was “a joyless man who hates the country of his adoption.”

Mr. Frank had come to detest the American drive for conformity, and the book was thought to be an indictment of American society, stripping away the picture-perfect vision of the country and its veneer of breezy optimism put forward in magazines and movies and on television. Yet at the core of his social criticism was a romantic idea about finding and honoring what was true and good about the United States. 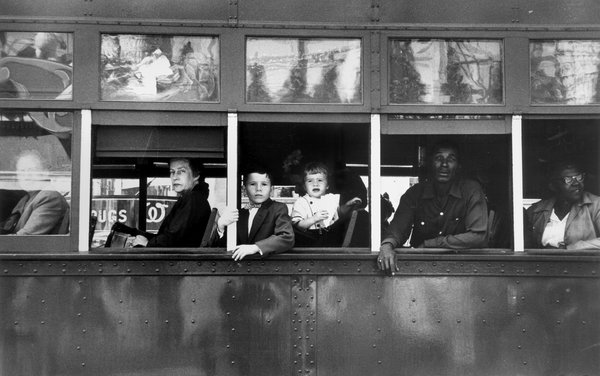 “Les Americains,” first published in France by Robert Delpire in 1958, used Mr. Frank’s photographs as illustrations for essays by French writers. In the American edition, published the next year by Grove Press, the pictures were allowed to tell their own story, without text — as Mr. Frank had conceived the book.

It was only after completing the cross-country trips chronicled in “The Americans” that Mr. Frank met Jack Kerouac, who had written about his own American journeys in the 1957 novel “On the Road.” Kerouac wrote the introduction to the American edition of Mr. Frank’s book.

“That crazy feeling in America,” Kerouac wrote, “when the sun is hot and music comes out of the jukebox or from a nearby funeral, that’s what Robert Frank has captured in tremendous photographs taken as he traveled on the road around practically forty-eight states in an old used car (on Guggenheim Fellowship) and with agility, mystery, genius, sadness, and strange secrecy of a shadow photographed scenes that have never been seen before on film.”

Twenty years later, Gene Thornton, writing in The New York Times, said the book ranked “with Alexis de Tocqueville’s ‘Democracy in America’ and Henry James’ ‘The American Scene’ as one of the definitive statements of what this country is about.”

Mr. Frank may well have been the unwitting father of what became known in the late 1960s as “the snapshot aesthetic,” a personal offhand style that sought to capture the look and feel of spontaneity in an authentic moment. The pictures had a profound influence on the way photographers began to approach not only their subjects but also the picture frame.

Mr. Frank’s approach — as much about his personal experience of what he was photographing as about the subject matter — was given further definition and legitimacy in 1967 in the seminal exhibition “New Documents” at the Museum of Modern Art in New York. The show presented the work of Diane Arbus, Lee Friedlander and Garry Winogrand, at the time relatively little known younger-generation beneficiaries of Mr. Frank’s pioneering style. The show established all three as important American artists.

Robert Louis Frank was born in Zurich on Nov. 9, 1924, the younger son of well-to-do Jewish parents. His mother, Regina, was Swiss, but his father, Hermann, a German citizen who became stateless after World War I, had to apply for Swiss citizenship for himself and his two sons.

Safe in neutral Switzerland from the Nazi threat looming across Europe, Robert Frank studied and apprenticed with graphic designers and photographers in Zurich, Basel and Geneva. He became an admirer of Henri Cartier-Bresson, who co-founded the photo-collective Magnum in 1947 and whose photographs set the standard for generations of photojournalists.

Mr. Frank would later reject Cartier-Bresson’s work, saying it represented all that was glib and insubstantial about photojournalism. He believed that photojournalism oversimplified the world, mimicking, as he put it, “those goddamned stories with a beginning and an end.” He was more drawn to the paintings of Edward Hopper, before Hopper was widely recognized.

“So clear and so decisive,” Mr. Frank told Nicholas Dawidoff in 2015 for a profile in The New York Times Magazine. “The human form in it. You look twice — what’s this guy waiting for? What’s he looking at? The simplicity of two facing each other. A man in a chair.”

Early on, Mr. Frank caught the eye of Alexey Brodovitch, the legendary magazine art director, who gave him assignments at Harper’s Bazaar. Over the next 10 years, Mr. Frank worked for Fortune, Life, Look, McCall’s, Vogue and Ladies Home Journal.

Restless, he traveled to London, Wales and Peru from 1949 to 1952. From each trip he assembled spiral-bound books of his pictures and gave copies to, among others, Brodovitch and Edward Steichen, then the director of photography at the Museum of Modern Art.

Walker Evans’s book “American Photographs,” which was not well known in the 1950s, may have been the greatest influence on Mr. Frank’s landmark “Americans” project.

“When I first looked at Walker Evans’ photographs,” he wrote in the U.S. Camera Annual in 1958, “I thought of something Malraux wrote: ‘to transform destiny into awareness.’ One is embarrassed to want so much of oneself.”

Evans, then the picture editor at Fortune, as well as Brodovitch and Steichen, wrote recommendations for Mr. Frank when he applied for a 1955 Guggenheim Fellowship to finance the project. Carrying two cameras and boxes of film in a black Ford Business Coupe, he traveled more than 10,000 miles and wound up taking, by his count, more than 27,000 pictures, from which he culled 83 for “The Americans.”

In 1949, he met the artist Mary Lockspeiser, nine years his junior, and gave her, too, a handmade book of photographs, which he had taken that year in Paris. They married the following year and settled in Manhattan, in the East Village, in the heart of a vibrant Abstract Expressionist art scene. (She is now known as Mary Frank.)

Mr. Frank remembered seeing through a window Willem de Kooning, paint brush in hand, pacing his studio in his underwear. At the Cedar Tavern, a legendary neighborhood bar, he would drink and argue with the artists of the period. Their son, Pablo (named after the cellist Pablo Casals), was born in 1951, and his daughter, Andrea, in 1954.

After “The Americans” was published, Mr. Frank’s artistic energies shifted to film, and, although he continued to work in photography and video, he would never again reach the same level of recognition for his work. Mr. MacGill, a longtime friend, posited that Mr. Frank would eventually be remembered as a filmmaker more than as a photographer.

The Scene: A Bohemian Loft

His first film, “Pull My Daisy” (1959), is a cornerstone of avant-garde cinema. Made in Alfred Leslie’s art studio loft in the East Village, it was co-directed by Leslie, narrated by Kerouac and featured, among others, Allen Ginsberg, Mary Frank, Gregory Corso, David Amram, Larry Rivers and Mr. Frank’s young son, Pablo.

Adapted by Kerouac from his play “The Beat Generation,” the film, 28 minutes long, follows in grainy black and white the antics of a merry band of bohemians who show up unannounced at a Lower East Side loft, where a painter, the wife of a railway brakeman, has invited a respectable bishop over for dinner. The film became a cult favorite as an expression of the Beat philosophy of improvisation and spontaneity even though, as Leslie later revealed, it was planned and rehearsed.

In 1960, Frank, along with Jonas Mekas (who died in January), Peter Bogdanovich and other independent filmmakers, founded the New American Cinema Group, the same year he began filming “The Sin of Jesus,” based on an Isaac Babel story.

He made his first feature-length film in 1965, “Me and My Brother,” about Julius Orlovsky, brother of Peter, who was Ginsberg’s lover. With this film, Mr. Frank began to blur the line between documentary filmmaking and staged narrative scenes.

The breakup of his marriage to Mary in 1969 coincided with “Conversations in Vermont,” the film he made about his children, Andrea and Pablo. The next year, he bought a fisherman’s house in Mabou, Nova Scotia, with the artist June Leaf, whom he married in 1975 and who is his only immediate survivor. Andrea died in a plane crash in Guatemala in 1974, and Pablo died in 1994.

In the early 1970s, Mr. Frank was commissioned to make photographs for the cover of the Rolling Stones album “Exile on Main Street,” and then asked by the band to shoot a documentary film about its 1972 concert tour. The film chronicled not only the group’s performances but also the violence of the crowds, the drug use and the naked groupies. It was not what the Stones had in mind, and the band obtained a restraining order, which put limits on where and how often the film could be shown.

That same year, Frank published “Lines of My Hand,” a book of photographs he had made before and after “The Americans.” His work was becoming more autobiographical, diaristic.

While the photographs in “The Americans” are the most widely acknowledged achievement of Mr. Frank’s career, they can be seen as a prelude to his subsequent artistic work, in which he explored a variety of mediums, using multiple frames, making large Polaroid prints, video images, experimenting with words and images and shooting and directing films, like “Candy Mountain” (1988), an autobiographical road film directed with Rudy Wurlitzer.

Still, it is “The Americans” that will probably endure longer than anything else he did. In 2007 he consented to hang all 83 of the book’s photographs at the Pingyao International Photography Festival in China, in celebration of the book’s 50th anniversary. And in 2009, the National Gallery of Art in Washington mounted “Looking In: Robert Frank’s ‘The Americans,’” an exhaustive and comprehensive retrospective of his masterwork, organized by Sarah Greenough. The show traveled to the San Francisco Museum of Modern Art and The Metropolitan Museum of Art in New York.

Mr. Frank acknowledged that in photographing Americans he found the least privileged among them the most compelling.

“My mother asked me, ‘Why do you always take pictures of poor people?’ Mr. Frank told Mr. Dawidoff in The Times Magazine. “It wasn’t true, but my sympathies were with people who struggled. There was also my mistrust of people who made the rules.”