Home » Entertainment » Review: With Balanchine and Confetti, City Ballet Is Back

Review: With Balanchine and Confetti, City Ballet Is Back

After the final ballet, confetti rained on the stage. Dancers, a handful at least, cried during their bows. The audience stirred the air with heartfelt and competitive cheers and applause. But wasn’t all of that pretty much expected? What was more startling — though strangely fitting — were the puddles on the pavement outside. At some point during the performance, it had rained. As we emerged from the theater after 18 long months and a radiant performance of George Balanchine’s “Symphony in C,” New York City Ballet’s opening night felt like a rainbow.

On Tuesday, at the David H. Koch Theater — with no intermissions and a vaccinated audience that was told to remain masked — City Ballet parted the curtain on its fall season with Balanchine’s “Serenade.” It made sense. Set to Tchaikovsky’s Serenade for Strings, this is a ballet breathtaking for anyone and everyone, in which dancers sweep across a moonlit stage in pale blue tulle that floats and settles back around their bodies like waves. 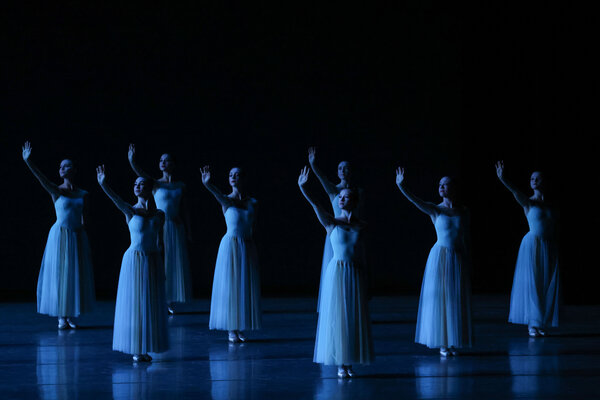 Part of Balanchine’s brilliance — and there’s much to choose from — was his way of reacting to the moment, his ability to bring real life into the ballet. In 1935, he choreographed “Serenade,” the first ballet he made in America, with unpolished dancers and outdoor rehearsals. With the sun beaming into their eyes, the dancers held up their hands to block it. He took note, and that’s how this gorgeous work opens: Dancers, standing in rows, raise an arm to the sky with a flexed wrist; gradually, the arms lower until the backs of hands pass over the eyes.

There was a dancer that fell. And a dancer who ran into rehearsal late and took her place quickly among the others. Balanchine used it all. “Serenade” is a masterpiece, meant to be watched in any day of any season, but now, because of the pandemic, its lessons are as much in its dancing — the women enter the realm of ballet the moment they open their feet from parallel to first position — as in its origin story. What does “Serenade” have to say in 2021? Make the most of what you have. Notice the world around you.

It’s good that “Serenade” will be repeated during the season: It’s a tool to help dancers grow back into their ballet bodies, to gain the stamina to be able to fly through it with footwork more gossamer than athletic, and bodies that can bend and swoon like slender reeds. This “Serenade” — with Sterling Hyltin, Ashley Bouder and Megan LeCrone as its female leads — improved as it went along, but at times the dancing lagged in speed, in crispness and in daring. Adrian Danchig-Waring, in a debut, was a bright spot in a performance that, at best, was efficient and enthusiastic; lively, for sure, yet never as alive as it could be.

Unfortunately, the other Balanchine ballet on the program, “Symphony in C,” will not be repeated: It was programmed as a special opening-night event, which — when you consider the rehearsals that went into it and the stamina it could generate — is a little puzzling. Megan Fairchild, who remarkably, not so long ago gave birth to twins, led in the first movement with a vibrancy that Joseph Gordon (and his dazzling pirouettes) seemed to feed on as he embellished his own performance with even more verve.

In the second movement, Sara Mearns, opposite Tyler Angle — among the company’s pandemic hair news, he shaved his head! — danced expansively, with strength and liquid momentum. It didn’t seem as though she had taken any time off. (Probably because she basically hasn’t.) In the third movement, Indiana Woodward showed she hasn’t lost any of her delightful effervescence — who dances with more elation? — while Lauren King, in the fourth, was better than ever: authoritative, precise, dynamic.

The program was meant to be kept shorter than usual because of the pandemic, but with a late start, the evening lasted two hours and was further stretched out by what was billed as a special treat — the City Ballet orchestra performing Tchaikovsky’s “Waltz of the Flowers.” Maybe it was a way to buy some time before “Symphony in C,” but it felt like a ruse to sell “Nutcracker” tickets.

Also wedged in the middle was the pas de deux from “After the Rain,” by Christopher Wheeldon. With the right dancers, it has a full-circle feeling — the etchings of a life in ballet told through whispered steps. Has it been performed too often, by too many dancers? Yes. God, yes. But this pas de deux, created in honor of Jock Soto’s retirement in 2005, always seemed like as much of a tribute him as to Wendy Whelan, his original partner in the work and a dancer of luminous vulnerability.

On Tuesday, it was danced by two soon-to-be retiring principals, Maria Kowroski and Ask la Cour, who took the ballet, set to Arvo Pärt’s “Spiegel im Spiegel,” back to its original, intimate place. Both tall, they match each other in length. But beyond that, the pairing of la Cour’s unpretentious bearing and Kowroski’s silent film star looks places the choreography, with its slow lifts and dreamy backbends, into hyper focus. Together, they have a way of not just moving through the choreography, but possessing the serenity to live within it.

In the pas de deux, Kowroski, whose farewell performance is on Oct. 17, wears a simple pink leotard and ballet slippers — a costume that hints at a ballerina looking back at her career. Without trying too hard, she seemed to root her performance in an awareness of time and place; as she danced, she soaked in her surroundings with eyes that brushed across the floor and lingered high into the farthest corners of the stage that only a dancer can see.

She was saying her first goodbye to a stage on which she has danced for more than 25 years. And just as she carved the air with her impossibly long arms and delicate hands, Kowroski seemed to be following Balanchine’s lead: Taking in the details, she was noticing everything.