Home » Entertainment » Review: ‘The Flamingo Kid,’ a Musical Not Yet in Flight Review: ‘The Flamingo Kid,’ a Musical Not Yet in Flight

HARTFORD — Since the invention of American musical theater, lyricists seeking a rhyme for “love” have been stuck with just a few wan possibilities, including “dove,” “above,” the odd “glove” and the truly desperate “shove.”

So, first, let me congratulate Robert L. Freedman for conscripting “mazel tov” to the cause, in a doozy of a song called “The Cookie Crumbles.”

That song, a highlight of “The Flamingo Kid,” which opened last week at Hartford Stage, is a blistering warning from a suburban matron, circa 1963, about what happens when a woman makes the wrong choice at an early age. “Time rolls along. You’ll play Mah-Jongg. And that’s your life.”

Let’s just add that “life” is soon paired with “knife.”

Even aside from Mr. Freedman’s sharp rhymes — and the sinuous, sulfurous music by Scott Frankel — “The Cookie Crumbles” checks off all the boxes of what great musical theater songs should do.

It addresses the plot moment: Phyllis Brody is telling her love-struck niece, Karla, not to get too involved with a sweet but feckless cabana boy at the El Flamingo beach club where the show takes place. It deepens our understanding of Phyllis’s character while reaching out to larger issues, in this case feminist ones. And as sung by Lesli Margherita in the show’s standout performance, it provides a bravura moment for the protagonist.

Except Phyllis is not the protagonist. Even less is this mild new musical about fierce women. The song is a side dish that shows up what should be the entree.

You may remember what “The Flamingo Kid” is really about from the 1984 movie starring Matt Dillon and Richard Crenna. It’s about fathers and sons. The cabana boy, Jeffrey, is torn between his real father, Arthur, a Brooklyn plumber with conventional expectations, and Phil Brody, the slick substitute father he acquires at the Long Island club where he spends the summer after high school.

Though Mr. Freedman’s book for the musical no longer suppresses the Jewishness of the milieu — Jeffrey’s last name has been changed from Willis to Winnick, and there’s even a rhyme for “shlemazel” — it still follows the movie closely. Arthur (Adam Heller) expects Jeffrey to take a summer job in a client’s accounting office and then go to college; Phil (Marc Kudisch) proposes a sexier future involving work at his car dealership, access to high-stakes games of gin rummy and summers filled with girls in bikinis.

Recognizing that the “girls in bikinis” aspect of the story might be ticklish today, the musical’s creators have tried to give the show’s women a makeover. Phyllis is superficial, yes, but also, in her big number, acute. Karla, with whom Jeffrey falls instantly in love, is not just a gorgeous U.C.L.A. student, as she was in the movie; she’s a firebrand in training. (Samantha Massell does her best with the underwritten role.) When Jeffrey meets her she’s reading “The Feminine Mystique,” just published. 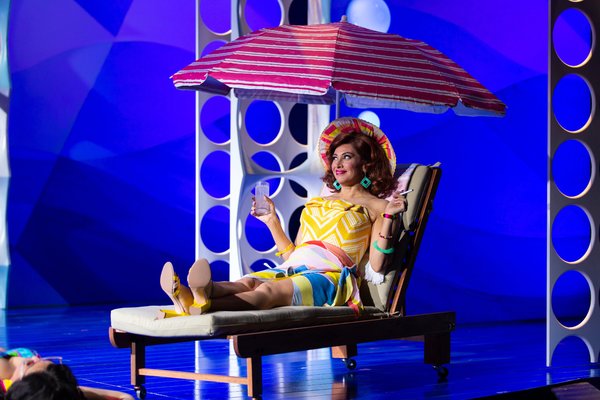 It takes more than that, though, to remove the sting of a stereotype. Nor would a stereotype in a secondary story matter if the main one were compelling instead of bland. But with little at stake beyond Jeffrey’s matriculation at Brooklyn College — and with a plot that turns on a game of gin rummy that the director, Darko Tresnjak, cannot effectively stage — the oomph goes AWOL.

Those are but a few of the problems that make “The Flamingo Kid” a “why” musical: the kind that has you asking not how well did they do it (pretty well, considering) but whatever for.

The score, at least, delivers on such opportunities. Though Mr. Frankel nods to the period with close harmonies and doo-wop riffs, he has too much integrity as a composer to rely on mere pastiche. As in “Grey Gardens” and “War Paint,” his melodies go their own delicious ways, and Mr. Freedman’s lyrics (as in “A Gentleman’s Guide to Love and Murder”) handily keep up.

But it’s a weakness of the underlying material, which Mr. Freedman has not been able to shore up, that the Brooklyn scenes can’t compare to those set in Rockaway. The songs for Mr. Heller, in terrific voice, and Liz Larsen likewise as Jeffrey’s mother, feel professional if dutiful, the kind you wouldn’t put at the top of your playlist but wouldn’t mind hearing again. Not so their scenes, all hokum and working-class Jewish clichés.

The scenes of nouveau riche Jewish life at the club (where “boys can be boys” and “we pretend to be goys”) are just as cliché-ridden, but at least these clichés are sparkly and engaging. Phil’s numbers, including one called “Rockaway Rumba,” really pop, with choreography by Denis Jones bringing them to full-stage life. And because the glibness of the dialogue matches that of the character, there’s a feeling of momentary pleasurable alignment whenever Mr. Kudisch is speaking.

I’m not yet feeling that about Mr. Brewer, an ingratiating young actor with a strong voice and nonstop smile. If he lacks gravitas for the role, well, it’s hard to be deep when you’re dancing in cabana shorts.

Still, you could never imagine his ebullient Jeffrey working in an accountant’s office, so the plot’s resolution, in which he renounces Phil’s philistinism in favor of Arthur’s honor, comes off as a disappointment. Jeffrey belongs at the club.

So does the musical. I guess that means I can’t give it a “mazel tov” yet. How about a gentle shove?