Candy jewelry. Some baby dolls. A stash of tampons. In the world of adolescent girls, items like these are ordinary features of the landscape. And so they are in Erica Schmidt’s bloody “Mac Beth,” an adaptation of the Shakespeare play that with its all-female cast becomes a raucous, sometimes impish, very dark-edged revel.

Yes, revel. To the seven teenagers in “Mac Beth” (two words), performing “Macbeth” (one word) is something to do for fun. Bringing all their exuberant energy, they gather late in the day in an abandoned lot, still wearing school uniforms. Dropping their backpacks on the scrubby grass, they get right to it, enacting the Scottish tragedy. Unbeknown to the others, a few of them plan to add a grisly, real-life twist.

In Ms. Schmidt’s streamlined script, which she directs in a nimbly paced production for Red Bull Theater, almost all of the text is Shakespeare’s. But the framing injects a duality, because the adult actors onstage at the Lucille Lortel Theater are playing his characters the way that schoolgirls would. Isabelle Fuhrman (who starred in Ms. Schmidt’s 2017 “All the Fine Boys”) puts a studious teen’s spin on her contemplative Macbeth, while an irrepressible mischief lurks within Ismenia Mendes’s wonderful Lady Macbeth, toggling between passion and playfulness.

When her husband wrecks their dinner party in his terror at seeing the ghost of the just-killed Banquo (Ayana Workman), she addresses Macbeth as if he has no sense of his own social lameness. “You have displac’d the mirth,” she says, and you know she’s on her very last nerve. 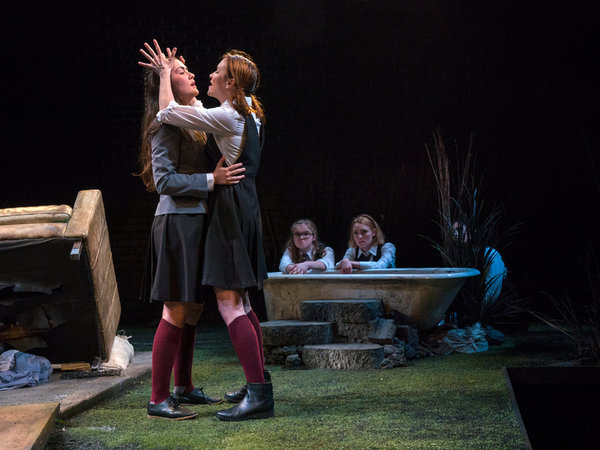 The ghost himself is a magnificently hulking spirit, all the more menacing after he’s been doused with red wine that evokes dripping blood. It’s a hilariously lively scene, and though levity isn’t the traditional tone, it works superbly here, subtracting nothing of substance.

That’s part of the unusual immediacy of this production, the schoolgirls making the characters we know from “Macbeth” legible in new ways — and plowing ahead with their performance even when the heavens open up. The band of prophesying witches (AnnaSophia Robb, Sharlene Cruz and the terrific Sophie Kelly-Hedrick) has spooky fun with the tartan-lined cloaks that are part of their school uniform (costumes are by Jessica Pabst), but they’re ingeniously creepy, too. They use those baby dolls to unnerving effect, and when one of the witches tosses a freshly plucked tampon into a potion they’re boiling up, it’s both viscerally revolting and exactly the sort of one-step-too-far gesture a rebellious adolescent might make.

Some of what the witches do, though, is played close to the ground on Catherine Cornell’s thrust-stage set. From the barely raked seats of the Lortel, the sight lines are not great for that. And when Lady Macbeth kneels near some stagnant water, trying to rinse the blood from her hands, you may have to crane to see, which drains the impact.

At the end, “Mac Beth” tips into Grand Guignol, and there’s no real horror to it. What’s powerful in this play isn’t its climax. It’s watching a group of girls meet Shakespeare on their own electric terms — with ferocity, abandon and the occasional wild dance break.