Home » Entertainment » Queer Muslims Are Still Rare on TV. One Writer Wants to Change That. Queer Muslims Are Still Rare on TV. One Writer Wants to Change That.

If Fawzia Mirza didn’t start seeing people like herself on screen, she felt like she “was going to die.”

So the gay, Muslim actor, writer and activist, the daughter of a Pakistani immigrant, took matters into her own hands. Her 2012 short film “Queen of My Dreams,” made with her longtime collaborator Ryan Logan, imagined lesbian romance as a Bollywood epic, addressing her longing to feel represented in a media landscape where stories like hers remain few and far between. It also helped answer a question which had long been plaguing her: “Can you be queer and Muslim?”

She explored the same question in her first script for television, for the fifth episode of CBS’s “The Red Line,” which aired earlier this month. In a pivotal scene, Liam Bhatt (Vinny Chhibber) and Daniel Calder (Noah Wyle) are approached by two white men in a gay bar. After they comment that Liam looks like a “Puerto Rican Adrien Brody,” Liam corrects them: He’s Indian-American, as well as Muslim. The men are confused: It’s not possible to be all those things and gay, right?

Executive produced by Ava DuVernay and Greg Berlanti, “The Red Line” examines lives impacted by police brutality, in the aftermath of a fatal shooting in Chicago. Mirza, whose background is in film and stage comedy, isn’t the most obvious choice to write for a network drama. But as a Chicago activist, she was familiar with the world of the show, and its themes align with her experiences straddling many different, seemingly conflicting identities.

Many of the conversations in the episode were pulled from her real life. One moment between the two main characters marked an extreme rarity for television: a sex scene featuring a gay Muslim character. During a recent phone interview, Mirza discussed the episode’s significance and the importance of queer Muslim characters starring in their own shows. These are edited excerpts from that conversation. 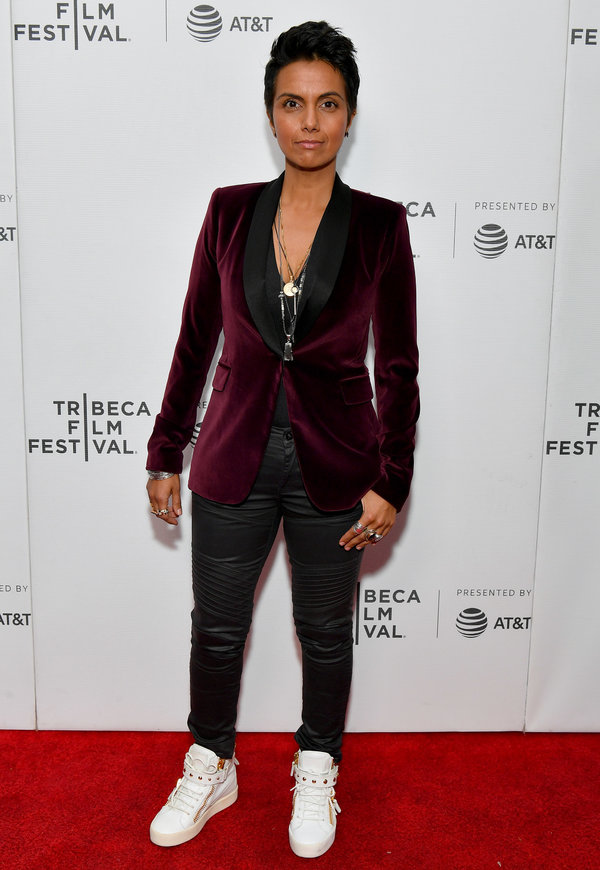 How did you become involved with “The Red Line?”

I was reached out to by Erica Weiss, one of the creators of the show. She’s a writer and director in the Chicago theater scene. We met and talked about things we believe in and stories we want to see.

They shot the pilot in March. It was originally based off a play written by Caitlin Parrish and Erica Weiss called “Twist of Water.” In that iteration, there was no queer Muslim character. They were thinking, “How do we take this story to another level?”, especially living in the political climate of a time where our president wants to ban Muslims and Muslims are deeply vilified by every aspect of this system. They thought, “What if we made him Muslim?”

I know they were really cognizant of not wanting to turn to the queer Muslim to be the “expert,” but knowing that all of my work is deeply informed by a very personal place and very much about identity, it’s something that I was really excited to bring to the room.

What did it mean for you to have a major role in creating this story line?

Even as you’re asking me that question, it makes me emotional. As out and public as I am about my identity, it was not easy, whether it was with family or with friends. There was no representation of positive straight Muslim characters at the time, much less positive queer Muslim representation. So for me, writing was a way of creating some of that representation. Now you have Tan France on the new “Queer Eye”; that was not what we were living 10 years ago. The landscape of television, pop culture and basic representation has shifted so much. It just wasn’t there.

I don’t think the job is ever going to be done. This is just the beginning of the work that we have to do.

Knowing that the sex scene would be so significant, were there any ways in which you exercised caution or approached it differently?

I agonized over it because I knew how important it was for us. I’m not a man, I’m a cisgender woman, but I wanted to represent our queerness strongly. The scene didn’t start as sex. At first, there was a lot of talk about [Daniel being] a grieving widower: “Where is he at in his life?” I said that I feel like these two men, regardless of the complications, I don’t buy that they’re not going to sleep together if they’re alone and they have that like kind of attraction. Grief or no grief, that is real. The other thing that I found really important was, I wanted that to be beautiful. I call it beautiful aggression, that beautiful masculinity that I really love when I see two men together. There’s tenderness, but there’s also this rawness.

I didn’t want people to watch the sex scene and think, “Who is the top and who’s the bottom?” What happens when audiences think about queer or trans people having sex, they end up thinking about: “Who is the woman and who is the man?” One of the things that went into it was about creating that moment without it being about a top and a bottom. We see them being really aggressive against a wall, we don’t see them in bed. That felt like a way to remove this subconscious question that people ask.

Why do you think it’s so important to see L.G.B.T. people in love on television?

I deeply believe that the way to change the narrative is to get to know an actual human being. That’s the ideal — that someone you know is gay and Muslim and they’re your neighbor and they’re cool. But it’s not possible for every single person in the world. Television, especially network television, has the opportunity to get into all of those corners and all of those viewers on their couches and connect with them. When I think of being a queer Muslim person, I just think, “I’m basically the same.” I don’t think this is true of all queer Muslims, but I think we have a lot more in common than we don’t. When we get to see those characters, it can often subconsciously shift who populates our world and how we think of people.

Love is one of the most relatable aspects of being human. Love is hope. And if you’re always looking at love through someone else’s lens, that can be deeply nullifying.

Where does television need to go now? What haven’t you seen that you need?

Since our current president has taken office, he’s been saying that Muslims and Mexicans are terrible people — they are the villains. But under a different administration post-9/11, Muslims were still written as terrorists. We saw that in “24.” A call to action is to not just create and populate the world with queer Muslim best friends but recognize that part of how we change that narrative is to make the queer Muslim the loudest voice in the show and whose story we’re telling from the beginning, from their perspective with their life, their family and their struggles.

The Secret to Capturing the Best Social Media Photo, According to Our Editors