The death of Prince Philip has given Prince Andrew the rare opportunity to step out from the shadows and talk about his late father. It’s been over a year since the royal was forced to step out of the limelight as a senior royal due to his association with convicted pedophile Jeffrey Epstein and he’s tried ever since to find a way back to his public duties. Well, Sunday was the day. 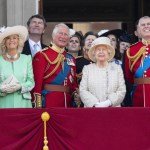 Andrew spoke to reporters outside of the Royal Chapel in Windsor Great Park after a special service in honor of his dad. While talking about Prince Philip as “the grandfather of the nation,” Andrew was serious and somber in a way we haven’t seen before —  it’s almost as if he knew this was his chance to step back into public life even for a moment.

He also took the time to reflect on his mom, Queen Elizabeth, and how she’s mourning the loss of her husband of 73 years. It’s his way of reminding us that he’s close to his mother and knows what is happening from an insider’s perspective. “I feel very sorry and supportive of my mother, who’s feeling it, I think, probably more than everyone else,” he told BBC News. “The Queen, as you’d expect, is an incredibly stoic person. She described his passing as a miracle.”

Prince Andrew continued to reveal what is happening behind closed doors with the family and how his mother is feeling — and maybe a slight dig at Prince Harry, who is currently quarantining at Frogmore Cottage after traveling overseas for the funeral. “She’s contemplating, I think is the way that I would put it,” Andrew explained. “She described it as having left a huge void in her life, but we, the family, the ones that are close to her, are rallying around to make sure we are there to support her.”

With Prince Andrew reportedly being the Queen’s favorite son — according to The Crown — it’s hard for us to embrace his reemergence as a senior royal, even if it’s just for a day. He’s never been cooperative with U.S. officials in the Epstein case, yet the palace is OK with Meghan Markle continually being cut down in the British press. Andrew has had a bubble of protection while they happily threw the Duchess of Sussex to the wolves and that hardly seems fair.

While this is a temporary return to public life, it makes us curious about Queen Elizabeth possibly testing the waters to see if the public will accept Prince Andrew again. It’s not a great idea because the Epstein case will always be lurking in the shadows, but there’s hardly a controversy the palace hasn’t stepped in this year. It’s a story that might have another chapter.

Click here to see the 100 best photos of the royal family from the past 20 years.