On 125th Street, Dancing Toward Freedom

The dancers had been walking for nearly six hours when, around 6:30 p.m. on a recent Saturday, they reached the Hudson River and rejoiced. Stepping in buoyant unison to the beat of a New Orleans-style brass band, they pumped their hands toward the sky and toward the ground, as if saluting the land, air and water that greeted the end of their journey.

They had made it through “125th and Freedom,” a marathon of a performance piece by Ebony Noelle Golden that stretches from the East River to the Hudson River in Harlem, inviting anyone in its path to join the procession. The 16 performers — and the rapt audience they had picked up along the way — had fulfilled, at least symbolically, the promise of one of their songs, repeated along the last leg of 125th Street: “We’re going to the mecca, the sea, the ocean.” 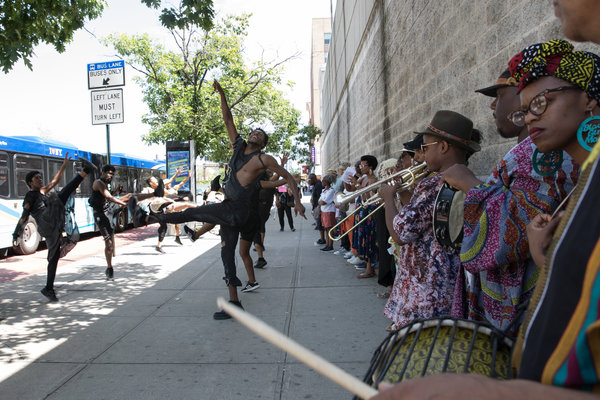 The celebration was hard-earned. Presented by National Black Theater as the finale of its 50th season, and performed on Saturdays throughout June, “125th and Freedom” arrives at a place of respite and release only after wrestling with difficult questions: about legacies of racial injustice; and about displacement in a rapidly gentrifying Harlem, a force that Ms. Golden, who lives in the neighborhood, has experienced firsthand.

Stopping at sites including the Harriet Tubman Memorial and the former Lenox Lounge — now a Wells Fargo — the 16-part ritual tells the story of a tribe fighting for its freedom with the help of Libra, a time-traveling descendant of Tubman who flies in from the future. As it progresses, the work grows more interactive; at Amsterdam Avenue, for instance, audience members write their hopes on slips of fabric and attach them to a sprawling “dream net.”

Ms. Golden, who is from Houston, began the project about five years ago as part of Dancing While Black, an initiative founded by the artist Paloma McGregor. Initially envisioned as a concert dance piece, it evolved along with Ms. Golden’s struggle to stay in Harlem in the face of rising rents. In an interview at National Black Theater’s headquarters near 125th Street, she recalled asking herself: “What does it mean to feel free in my own body, and to feel free in my home?”

The inaugural project of NBT Beyond Walls, a program that brings National Black Theater out of its longtime residence as it prepares for a major expansion, “125th and Freedom” echoes the work of the company’s founder, Barbara Ann Teer. Her early ensemble, the Liberators, often performed in the street, combining poetry, music and dance — Ms. Teer began her career as a modern dancer — much like Ms. Golden does today.

“We hadn’t really revisited that Liberator energy since the ’70s and early ’80s,” said Sade Lythcott, Ms. Teer’s daughter and National Black Theater’s chief executive. “So we decided to end our 50th season with a piece that honored this tradition.”

Ms. Golden, who is also the founder of Betty’s Daughter Arts Collaborative, spoke about the long, fruitful effort of making a work for Harlem’s streets. Here are edited excerpts from the conversation.

You’ve gone through a lot to stay in Harlem.

People say, “Just move somewhere else, move to Jersey or the Bronx,” and I have tried that. But it’s not just a desire to live in Harlem; it is absolutely necessary, and I’m talking from a spiritual perspective, a political perspective, an academic and scholarly perspective. It is actually a part of my resistance, to find a way to be in the home, the mecca, of the black arts. When we sing that at the end of the show, we’re talking about Harlem — about protected, sacred black space.

Why did you decide on a site-specific approach?

I thought: If I’m going to build this love poem to Harlem, and to places that are dealing with this rapid change, I need to be in public. This is a political choice for me as an artist, because I see the concert stage as a safe space — a curated, manicured space. You get in, do the thing, get out.

There’s a whole other set of circumstances when you take a rather polarizing conversation to the street and ask these questions in earshot of people who may agree or disagree. All of it can be rather volatile.

So people come up and ask what you’re doing?

People have been doing that the whole time. I’ve been building this piece for four years; 125th Street has been my studio. When we first started, people would literally be like, “Get out of the way,” and we kept coming back. We kept listening and engaging people to the point where now they know we’re coming.

In the finale — a reprise of the first scene — are you drawing from particular movement traditions?

I’m looking a lot at the Second Line dance that comes out of New Orleans, at carnival dance that’s diasporic, at Caribbean dance styles. And my own training in terms of West African dance is coming through.

What do you see as the role of dance in this piece?

It’s the cornerstone. I’m a multidisciplinary artist that must work through my body. I need to tell the story through movement first, and then the words will come.

Before we had all of the choreography set, there were gestures that kept reappearing. They were approximations of what we saw in pictures of Harriet Tubman: how she stood, the iconic image of her reaching forward and reaching back. Every image we saw, we hydrated in a way, so that it wasn’t static anymore.

One of my biggest choreographic influences is Jawole Willa Jo Zollar. Her work, my understanding of her work, is about a muscular detail, a muscular nuance: the way the body is asked to explore and deepen and find. Most of the time we’ve been making this piece, that’s been the experiment. It hasn’t been “do these steps.” It’s been: Find where liberation lives in your muscles, in your bones, in your blood, in your DNA. And move from there.

Through June 29, beginning at 125th Street and First Avenue in Manhattan; nationalblacktheatre.org.