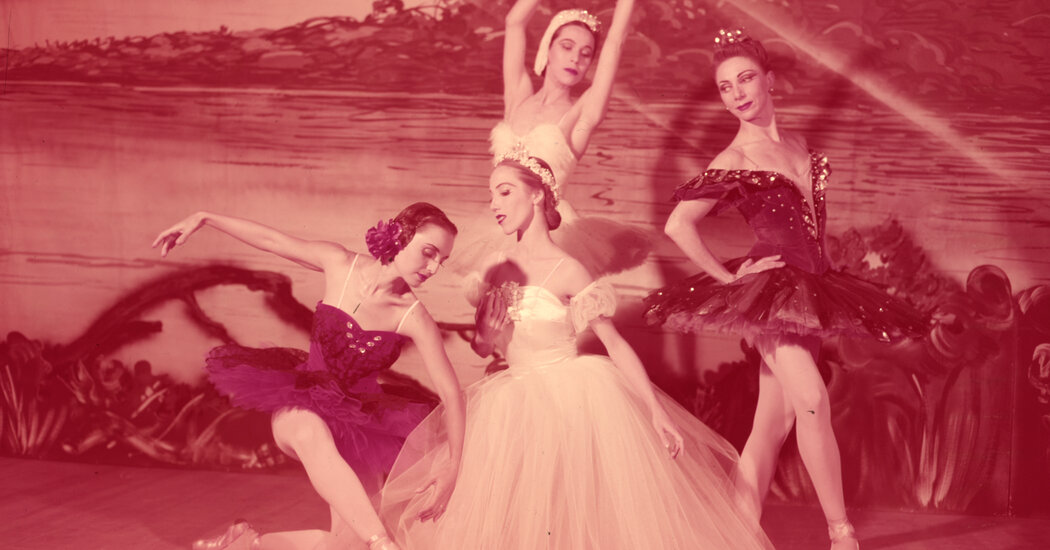 At the first Oklahoma Indian Ballerina Festival, in 1957, its founder, Moscelyne Larkin, danced Myrtha in Act Two of “Giselle” and Maria Tallchief performed an excerpt from “Swan Lake.” It was a festival created to honor five Native American ballerinas, all hailing from Oklahoma. But it would take 10 years, and the premiere of a ballet, “The Four Moons,” for the festival to really celebrate the dancers’ heritages as well as their artistry.

As prima ballerinas in the 1940s through the 1960s in major companies, Yvonne Chouteau, Rosella Hightower, Larkin, and Maria and Marjorie Tallchief were transformative artists. This summer, the Five Moons Dance Festival, presented by the University of Oklahoma’s School of Dance, will celebrate their impact on 20th century ballet, honoring the significance of their Indigenous backgrounds.

“The Four Moons” ballet, with a score by the Cherokee-Quapaw composer Louis Ballard Sr., was danced in 1967 at the second Oklahoma Indian Ballerina Festival with four of the ballerinas. The fifth, Maria Tallchief, perhaps the most recognized in American ballet, had retired from dancing and remained firm in her decision not to perform. It was the first time, as professionals, they would represent their own stories as Native American women on the stage.

Without any known recordings of the performance, “The Four Moons” has been fragmented into a few hazy memories, with some clues left by reviewers. Larkin (Shawnee-Peoria), performed a swift and effervescent solo, and then Hightower (Choctaw) appeared in a self-choreographed, playful story. Next came Marjorie Tallchief (Osage), whose elegant variation shifted the atmosphere in the theater, enrapturing the audience. That led into a section by Chouteau (Shawnee-Cherokee) about the devastating Trail of Tears, with delicate yet determined bourrées pulling her heavy heart along, despite her gliding feet.

“I’m very glad we did it,” Marjorie Tallchief, 94, said recently, on the phone from her home in Delray Beach, Fla. “It was amazing, at that time, that they got us all together.”

On a program including works by George Balanchine and Bronislava Nijinska, “The Four Moons” was created to honor the histories of these tribes as they were forced from their land and settled in Oklahoma. The dancers themselves were meant to represent the destinies of the tribes; the original program featured them as four moons in a painting by the artist Jerome Tiger, who was Muscogee-Seminole. They would later become known as Oklahoma’s Five Moons ballerinas. (Marjorie is the only one still alive.)

Audiences loved “The Four Moons,” but some critics stumbled over its convergence of Native American themes and classical ballet, seemingly surprised by a traditional pas de quatre instead of a “corn dance or sun dance,” as The Saturday Review put it.

With so much discussion in the dance world about representation and diversity, the moment for a Five Moons festival seemed right to Michael Bearden, the director of the School of Dance, which was founded by Chouteau and her husband, Miguel Terekhov. Bearden also wanted to involve female choreographers, who are still rare in ballet, and Native communities (there are 39 federally-recognized tribal nations in Oklahoma) through conversations exploring aspects of the Five Moons ballerinas’ careers and lives as Native women.

The festival, which runs Aug. 27-29, will feature works by Stefanie Batten Bland, Annabelle Lopez Ochoa, Rena Butler and DaYoung Jung, as well as Osage Ballet’s “Wahzhazhe,” about the story of the Osage nation, produced by Randy Tinker Smith and choreographed by Jenna Smith.

Russ Tall Chief, who lives in Oklahoma and is related to Marjorie and Maria through his great-grandfather, is on the festival’s planning committee and will participate in one of the lectures.

“I think it’s important for us to remember that Maria and Marjorie and all five of the ballerinas came out of Oklahoma, from small rural reservation communities,” he said. “To have these women of color, representing not just American Indians, but America, on the ballet stage was profound.”

Excerpts from the ballet “Wahzhazhe” will include an opening prayer section, an important tradition of the tribe.

“To us, to Osages, there’s a direct silence about Native America,” Tinker Smith said. “Because every day we face challenges. We have to work harder, try harder and do better, just to have things that non-Indians have. And I think that the timing is perfect for this. To have this legacy of these five ballerinas in our past, that are part of us, really inspires the kids. You can dream and you can follow your dreams.”

In the 1940s, when Chouteau, Hightower, Larkin and the Tallchiefs were beginning their careers, they were proudly Oklahoman, though ballet as an art form was widely considered European.

The only season in which Hightower, Larkin and Marjorie Tallchief were together in Col. W. de Basil’s Original Ballet Russe, 1946-47, the program linked them together by their home state, and distinguished them among the company’s handful of Americans. (Larkin was billed as Moussia Larkina; like many others she had opted for a Russian-sounding stage name, which she soon shed again for Larkin.) Only Tallchief is identified further as “of Indian ancestry, part Osage.”

“It was part of me, it was my name,” Marjorie Tallchief said, acknowledging that being Osage was significant in her career. After a lengthy pause, she added: “Actually, my father made me promise that I would never change my name. I just suddenly remembered when I was leaving, he said, ‘You promise me you’ll never change your name?’ And I said, yes. So I never did.”

Marjorie and Maria grew up in Fairfax, Okla., and it was their mother who encouraged their early music and dance training. The Tallchiefs performed sister act dance routines, first locally — including at the Tall Chief Theater, built by their father Alex Tall Chief, which still stands today — and then in California, where their mother relocated them for better ballet instruction. It was in Beverly Hills that Maria made the adjustment from Tall Chief to Tallchief.

Maria joined the Ballet Russe de Monte Carlo at 17, leaving several years later to join Ballet Society, the company that would become New York City Ballet, after becoming the wife of George Balanchine, its founding choreographer. There she ascended to star status.

Balanchine, who adored America, loved her Osage heritage, she wrote in her 1997 autobiography. But strained cultural characterizations prevailed in the 1944 version of his “Le Bourgeois Gentilhomme,” which included a “Danse Indienne” pas de deux. In a performance crisply preserved on 16 millimeter film, Maria dances quick stylized parallel lifts of her knees wearing a billowy feathered headdress, pompoms and a sash. (Balanchine would later rework the ballet entirely, with no “Danse Indienne.”) Maria went on to important roles in ballets including “Firebird” and “The Four Temperaments,” and became a beacon of American dancing.

Marjorie followed her sister into professional ballet, joining Ballet Theater and then de Basil’s Original Ballet Russe and the Grand Ballet du Marquis de Cuevas in France. In 1956 she was invited to join the Paris Opera Ballet as the first American étoile, the highest rank in the company, commanding classical repertoire with her exhilarating control and lyrical stage presence.

Hightower also made her career largely in Europe, eventually becoming a leading ballerina with the Grand Ballet du Marquis de Cuevas. She was so beloved that when she returned to that company in 1957, after ending a touring contract with Ballet Theater, audiences applauded for 15 minutes during her entrance in “Piège de Lumière.”

These five distinguished Native American ballerinas came out of Oklahoma all within one decade. As students, they frequented some of the same studios and master classes, including in Kansas City and Los Angeles, but in fleeting phases, just as they sometimes performed in companies together during their careers. In several interviews, Chouteau credited her Shawnee-Cherokee heritage as her inspiration to dance. (As a child she toured Oklahoma, her family insisting on the authenticity of each of her dances.) Marjorie Tallchief noted the immense influence the Ballet Russe had on small towns as it made its way through the country.

As professionals the Five Moon dancers would each encounter challenges, not only because of the grind of constant traveling, but also because they needed to find their place in the culture of their companies not just as Oklahomans, but also as Native women. Being from the United States, they were perceived by the public and press as demonstrating an overall informality, and possessing an ease onstage. While internationally respected, Hightower was still referred to as a “little American girl” in a Dance Magazine feature. Chouteau recalled her fellow dancers encouraging her to pronounce her name in a more French way, instead of how she grew up saying it in her family. They were Americans in a time when ballet wasn’t exactly American yet.

In an early review written about Maria Tallchief, John Martin of The New York Times noted her Osage heritage and said that “with careful handling,” she might very well “develop into ballerina material.” A decade later, in 1954, she was featured on the cover of Newsweek, with the headline “The Ballet’s Tallchief: Native Dancer,” her Osage heritage used to signal a “new order in the ancient and honorable clan of ballerinas.”

A reframing had occurred, especially in the media — if ballet was now American, it proposed, then here were your truly American dancers. “We were a curiosity,” Chouteau said in an interview in The Oklahoman in 1982, when gathered for the state’s Diamond Jubilee.

Marjorie Tallchief said that in Europe, newspapers mentioned she was Osage, but she thought it was a different treatment than her sister might have experienced in the States.

“They didn’t have anything against me,” Marjorie Tallchief said. “Maybe, but not because of my heritage.”

“Back in the Paris Opera I was the only one who wasn’t French,” she said. “Obviously, they noticed this. It’s very hard to become a dancer at the Paris Opera. So anyone that comes from outside as a first dancer” — or étoile — “I would say there was a little pressure on me because of that.”

Despite every desire to define them, and describe them within ballet’s rigid terms, they established five distinct and powerful careers. “These are American Indian people that have made this impact on ballet,” Russ Tall Chief said. “And that they consider themselves American Indian before they consider themselves ballerinas, I think that’s important. That is part of their vocabulary as dancers. They bring that history of American Indian culture to their dance, and to their interpretation of the way that they see ballet.”

20 Classic Haircuts That Never Go Out of Style
Entertainment