Home » Entertainment » 'Nailed It!' Host Calls Out Netflix For Erasing Her From Show Promos 'Nailed It!' Host Calls Out Netflix For Erasing Her From Show Promos

Netflix is rightfully getting called to the carpet to discuss their decision behind an advertising choice they made for one of their hit reality TV competition shows. On Tuesday, Nailed It! host and comedian Nicole Byer shaded Netflix over a show thumbnail taken from the streaming platform’s website that is meant to entice viewers to watch. The thumbnail appears to completely overlook Byer, a woman of color, and focus on her white male costars. Even if Netflix meant no ill will in choosing the shot, this definitely needed to be addressed and Byer was exactly the right person to do it.

On Tuesday, Twitter user @dylsauce wrote in a since-deleted tweet (screenshot for posterity posted below), “i remember reading somewhere that @netflix puts men on the thumbnails of shows and movies a lot, but yo – this is NUTS. @nicolebyer IS NAILED IT. I love wes and chef jacques but COME ON – this is so upsetting.”

The screenshot shows Byers’ costars, assistant producer Weston “Wes” Bahr and chef Jacques Torres, having a grand old time in a thumbnail for the show. The thumbnail is exactly the one you’d see while scrolling endlessly through Netflix and looking for something to watch. The biggest problem here is that the thumbnail completely excludes Byer, who has been the face of the show since it began in 2018. It’d be an honest mistake if Nailed It! was in its first season and nobody knew what the show was. But Nailed It! is about to go into its third season and has had tons of special episodes that have definitely made it *a thing*, making this Byer erasure all the more confusing since fans definitely know she’s a main part of the show. 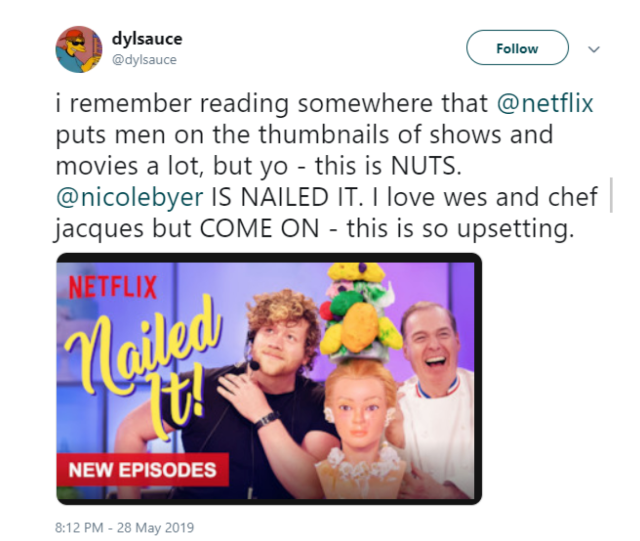 In a series of now-deleted tweets, Byer responded to @dylsauce’s tweet. While the host tried to diplomatically address the problems she had with her employer’s decision on how to promote the show on its site to potential viewers, it was clear Byer was distressed about what had been done.

“If Netflix didn’t sign my checks and give me a huge platform and opportunity to showcase my comedy. I would talk about how f–ked up and disrespectful this is to me a black woman. Also how black women are a lot of times erased from many different conversations,” Byer wrote in the first of three tweets.

She continued, “I would talk about how it makes me know my true value as the host of the show where I work incredibly hard to elevate the material given to me. Lot of moments people love are improvised,” and went on to conclude with “I would talk about how this essentially whitewashing for more views. But they sign my checks and I’m honestly so happy and greatful [sic] to and for the show and no sarcasm I love my job and wish to keep it so I’ll be quiet.”

Byer did acknowledge that “there are thumbnails with and without my face” but said that “this one just seems for lack of a better word deliberate” and told followers, “again, I love my job.”

It seems that Byer’s comments got the attention of Netflix. Shortly after writing her tweets, they disappeared and in their place, Byer updated her followers: “I deleted my last set of tweets bc I talked to one the execs on my show about it and the thrilling conclusion is the removal of the image and a conversation about how the thumbnails are made and selected that I’m happy with.”

Listen, we don’t want to hate on Netflix. When it comes to choosing a show, we understand that there’s a limited window of time to grab a person’s attention so a show or movie thumbnail has to be attention-grabbing. But we also know that it was messed up of Netflix to exclude Byer, an integral part of Nailed It! and arguably the one element that makes the show so fun. We’re glad this matter has been resolved.

Louvre reopens after staff go on strike amid overcrowding
Entertainment