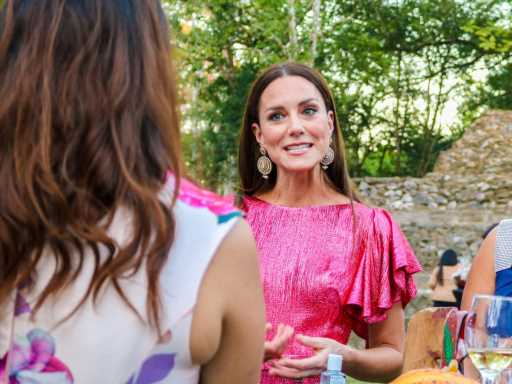 Prince William and Kate Middleton’s tour of the Caribbean was supposed to be a celebration of Queen Elizabeth’s Platinum Jubilee, but it’s been fraught with nothing but controversy from the start. With the critics pointing out the royals’ tone-deaf approach to Britain’s history of colonialism, the latest video clip with the Duchess of Cambridge didn’t do anything to help that narrative.

Kate is finding herself under the social-media microscope after being caught recoiling away from Jamaica’s Minister of Culture, Gender, Entertainment & Sport, Olivia Grange, on Tuesday. (See the video HERE.) The Jamaican official is seen trying to gently reach for the royal’s hand to guide her over to speak with her. The Duchess of Cambridge keeps stepping further and further back, which makes it an awkward and uncomfortable situation to watch. The account that posted the clip reminded their followers about Prince William’s famous quote after Prince Harry and Meghan Markle interview with Oprah Winfrey, “We are very much not a racist family.”

The optics of that moment with Kate don’t look very good for the royal family, especially in a country that is seeking reparations and independence from Britain. Grange, who welcomed the couple on Tuesday, also has a strong opinion about what needs to happen in the future. “They are our guests, and we will make them feel at home, but it’s not going to move our focus from the fact that an injustice was done to our ancestors, we seek reparations and we are focused on achieving that,” she told the Jamaica Observer.

Royal experts will say that no one is supposed to touch the Duke or Duchess, and that is why Kate kept stepping back — those rules have been in place for centuries. But for a family that is hoping to modernize the monarchy, this approach doesn’t feel very modern, especially when Princess Diana spent her entire time with the palace embracing sick kids and AIDS patients (and happily breaking all the archaic rules). This isn’t the goodwill tour that the royals planned, and protesters are willingly pointing out that the monarchy doesn’t suit their needs anymore.

Before you go, click here to see Princess Diana’s most scandalous royal moments.