Kaley Cuoco Thanks You for Flying With ‘The Flight Attendant’

This interview includes spoilers for Thursday’s finale of “The Flight Attendant.”

Early in “The Flight Attendant” on HBO Max, Kaley Cuoco’s titular character Cassie asks, “What’s wrong with messy?” She’s referring partly to her taste in Russian literature (long story) but also to herself. What’s wrong with being a little complicated, she wonders?

In the world of television, shows that are complicated often get compared to serious literature. But a genre-straddling romp like “The Flight Attendant” — part mystery-thriller, part existential romance, part screwball comedy and semi-surrealist character study — risks getting branded as nothing more than mindless fun. Critics have compared the limited series, adapted from a novel by Chris Bohjalian, to a summer beach read (Vanity Fair, The Hollywood Reporter, CNN) and an airport page-turner (USA Today, Variety, Rolling Stone).

There is a definite escapist appeal, including sumptuous scenery that was shot in Bangkok and Rome before the pandemic. (New York production paused during the shutdown and resumed in the fall under strict protocols — the last three episodes were the main ones affected.) After a year of social distancing, lockdowns and increasing anxiety, “people just craved this sort of show,” Cuoco said of her first live-action series since “The Big Bang Theory.”

“It felt almost necessary — it was lighthearted; it was quirky,” she said. “It was refreshing to pretend we were still in the Before Times.”

At the same time, the show has a deeper emotional core that should resonate with “anyone living through 2020,” said the showrunner Steve Yockey. As the old song goes, one night in Bangkok makes the party girl tumble: Cassie’s life goes into free-fall after she wakes up next to a dead date, which leads her to make every bad decision possible and relive quite a bit of buried trauma along the way.

Heading into Thursday’s finale, “The Flight Attendant” had already revealed its biggest mysteries: who killed Cassie’s fling Alex Sokolov (Michiel Huisman) and why. All that remained was for a newly sober Cassie to try and protect herself and finally tidy up her messy life as a few last twists played out. Others in the show had their own intrigue to sort out, including Annie (Zosia Mamet), Cassie’s friend and attorney, and Megan (Rosie Perez), a flight attendant colleague.

“There is something fun about everyone in the show having some sort of secret,” Yockey said.

In separate phone interviews, Cuoco and Yockey discussed the finale’s big reveals, the show’s tonal shifts and Season 2 possibilities. These are edited excerpts from the conversations.

I read the book, yet Imperial Atlantic flight attendant Shane [Griffin Matthews] as a secret C.I.A. agent was not something I expected.

STEVE YOCKEY If you go back, there are these great little Shane things that resonate on a second viewing. In the first F.B.I. interview, he spontaneously starts speaking Russian and then asks the F.B.I. all these questions, instead of answering their questions. In Rome, he grills Megan about her friend. It seems catty in the moment, but he’s actually doing his job. The Shane reveal was meant to be a fun capper on the big climax. It wasn’t something that people could suss out in advance.

What about the twist in which Felix/Buckley [Colin Woodell] was revealed to be stalking Alex and then Cassie throughout the whole series? The flashback montage demonstrates that he’s been there all along but even when you know he’s there, it’s hard to pick him out, especially on the original flight to Bangkok.

YOCKEY The idea was to just feel his presence. It’s a glancing thing, like the hotel camera footage where he’s in the top corner of the screen. But when we were shooting on the airplane set, we couldn’t fill the plane in the same way that we normally would.

CUOCO We shot all of Buckley’s stalker scenes before the pandemic, except the one where we wanted him on the plane with everybody. I wish we had that shot. When we came back, there were only eight extras. They were also doubling as crew members, and we mixed them up and moved them around with wigs or different clothes. At one point, I was like, “That person flying yesterday is now in this bar. We’ve got to try and hide this better.” It was probably my O.C.D. eye noticing more than anyone else would have.

What other elements did you have to adjust or rewrite after the series’s pandemic hiatus?

YOCKEY We did get rid of a car crash. In the original version of the car fight in Episode 6, Miranda [Michelle Gomez] starts her car, the guy from behind strangles her, she steps on the gas and slams the car into a nearby dumpster to launch the airbag, which throws the guy in the back seat, and she stabs him in the eye. We figured out how to do it without the car crash, because the number of people we would have needed to be involved was prohibitive. That’s actually our stunt coordinator playing the assassin. 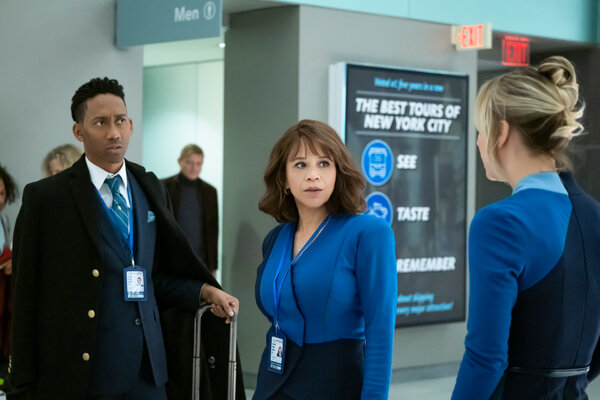 The script was full of nutty moments and turns. Kaley, did you ever find anything a little hard to swallow?

CUOCO The hardest thing was Cassie making out with Alex in the tiny airplane lavatory. I remember going, “Guys, this is so ridiculous! This would never happen!” And then the team started sending me articles and blogs about flight attendants and the mile-high club. People had really done this. That was a shock to me, because looking at the size of the bathroom? OK, I guess two people could fit in there. But to actually be physical? [Laughs.] That took some convincing.

This show has so many tonal jumps, especially when Cassie’s drinking or freaking out. The finale is probably the longest time we spend with Cassie sober.

CUOCO Something I fought for was to have Cassie drink more. Sometimes the network thought Cassie was drinking too much, and I kept saying, “This girl, she is a functioning alcoholic.” I know a functioning alcoholic, and when they’re not drinking is when they’re actually at their worst. Cassie drinks all day. I didn’t want it to feel like she was drinking every second, but she steals those little bottles to survive the day. Even when she’s drinking, I wanted to make sure Cassie wasn’t sloppy all the time. She does have her act together in some ways, but there’s a lot going on in her mind.

YOCKEY Every time Cassie has a breakdown, Kaley would try something different. With the Sunday school classroom scene, she gave a sort of raw, quiet performance. Then she tapped into something super emotional. Then she did something in between.

CUOCO Because it was so tonally challenging, I did every scene multiple ways. It became a joke on set. I’d be like, “OK, guys, this one is going to be funny!” and then there would be tears rolling down my face.

There are so many escapist elements — the travel, the locations, the clothes — but an unexpected breakout was the hair. Could Cassie’s style be the new “Rachel”?

CUOCO That was a big topic of conversation. [Laughs.] I wanted the hair to be a statement. I wanted it to look like Cassie could put it together when wasted, or if she partied all night and woke up like that. She lives in a teeny tiny apartment, and I believe she spends all her money on how she looks.

We barely did any hair or makeup in the last few episodes. I would cry all day and not touch up the mascara. I had some really dark circles under my eyes. This girl was going downhill and we had to let it go. When Cassie goes on that bender, she’s giving up. I felt like she was going to drink herself to death. But when she’s getting back on track, I was like, “Guys, she’s been in these clothes for three days.” That’s why I wanted her to go buy the “I Love NY” sweatshirt, to help clean her up a little.

This show was planned as a limited series but given that it found an audience, might there be another season?

CUOCO Maybe we’ll know by next week? We have been having some conversations about what a second season would look like. All of Cassie’s antics before, it was always like, “Well, that’s just Cassie!” What if we go down this route of her living this new lifestyle, trying to be sober and clean up her act, and there is no excuse anymore? And what does work now look like? What does love now look like?

YOCKEY The drinking was a symptom of the emotional trauma, and all the other stuff was a byproduct of the drinking. So we’ll see when she gets sober. It doesn’t mean that the rest of the erratic behavior calms down.

CUOCO And how do you live an honest life if you’ve never lived an honest life? That’s not going to change in two [Alcoholics Anonymous] meetings.

In the book, Cassie ends up pregnant.

CUOCO I can safely say we don’t go there. That was a bit too far.

YOCKEY Kaley has the veto power to stop us from ever doing that. [Laughs.] And it would feel a little deus ex machina if the reason Cassie makes massive strides to clean up her life were for a child, instead of for herself. It was important to me that she go on this journey to better understand her own history. We basically watched Cassie learn to love herself, so her emotional arc feels complete. If we did have a second season, it probably would be a whole new adventure, like a new Hitchcock movie for Cassie to stumble into.

CUOCO I also don’t want her to wake up and suddenly be a spy. She’s not a professional in that regard, but I do wonder if she could be used in that C.I.A. Human Asset Program. That could be interesting for her.

What about Cassie teaming up with Miranda again? She dies in the book, but you kept her alive.

YOCKEY There’s always a world in which Miranda shows up, which is the kind of world I like to live in.

CUOCO And we’d love to explore more of Cecilia [Briana Cuoco]. It was so awesome to see my sister be in there and be such a badass, bless her heart!

Can you explain the show’s biggest unresolved mystery: Why does Annie have a see-through shower in the middle of her living room?

YOCKEY [Laughs.] She’s a person whose life seems to be designed to be very open — she’s audacious in that way. But really, she’s hiding a ton of secrets. So that’s why we have that shower!

CUOCO I loved the whole thought behind that: Annie being so private, yet her shower being so public.

YOCKEY We thought it would be a fun way to introduce Max [Deniz Akdeniz], who is the opposite of Annie in a lot of ways. He’s naked and he’s basically like, “I’m an extortionist. Would you like a bagel?” Everything’s on the surface. By the way, everybody visiting that set would say, “When do I get to have this apartment?” Everybody wants that apartment. And I think we all need that shower in 2020.

The Real Reason Behind Chef Rachel’s Explosive Below Deck Exit