This is a breaking story. Check back for updates.

LONDON — Johnny Depp on Monday lost his court case against a British newspaper that called him a “wife beater” and claimed there was “overwhelming evidence” that he had assaulted the actress Amber Heard repeatedly during their marriage.

Andrew Nicol, the British judge who heard the case, issued his ruling online on Monday, 96 days after the hearing into the accusations closed.

“The claimant has not succeeded in his action for libel,” the judge wrote, dismissing the case, saying that the defendants had shown that what they published was “substantially true.”

When the case was heard in July, it often seemed as if it were occurring solely to generate lurid newspaper headlines and movie-world gossip. Countless unsavory details of Mr. Depp and Ms. Heard’s marriage were aired.

But it was actually a libel case in which Mr. Depp, 57, was suing News Group Newspapers, the publishers of The Sun, a British tabloid newspaper, and Dan Wootton, that newspaper’s executive editor, over a 2018 article that said there was “overwhelming evidence” that Mr. Depp had assaulted Ms. Heard.

The article called Mr. Depp a “wife beater” and urged the author J.K. Rowling to intervene and have Mr. Depp removed from the “Fantastic Beasts and Where to Find Them” movie series, based on her book.

The newspaper’s legal team argued that the accusations in the article were “accurate and true.” Ms. Heard, 34, testified on the newspaper’s behalf and said in pretrial documents that Mr. Depp had assaulted her on 14 occasions during their relationship starting before they were married. Mr. Depp denied all of the claims.

Mr. Depp is also suing Ms. Heard for defamation in the United States over an opinion article that she wrote for The Washington Post under the headline “I spoke up against sexual violence — and faced our culture’s wrath. That has to change.” Mr. Depp says the article led to his being dropped from the “Pirates of the Caribbean” movie franchise.

It was not immediately clear whether the British judge’s ruling would have any implications for that case. 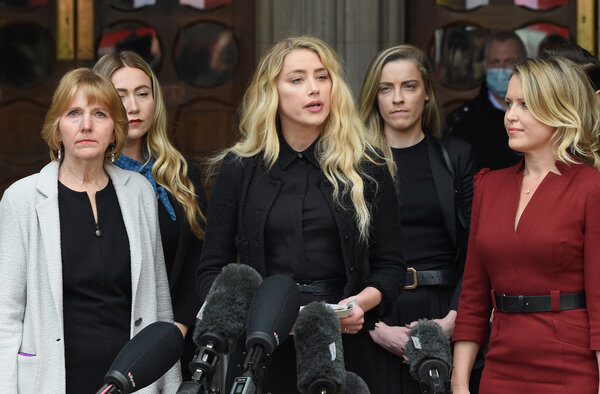 During the trial in Britain, the pair’s relationship was portrayed as tumultuous and filled with outbursts of violence. They met in 2011 while making “The Rum Diary,” a movie based on the book by Hunter S. Thompson, and married in February 2015. Ms. Heard filed for divorce just over a year later. She also obtained a temporary restraining order against the actor after accusing him of hitting her.

Ms. Heard later withdrew the claim, and in January 2017 the pair agreed to a $7 million divorce settlement. “There was never any intent of physical or emotional harm,” they said in a statement at the time.

During the trial, Ms. Heard said that the first time Mr. Depp assaulted her was in 2013, before their marriage. On that occasion, she said, he hit her three times after a discussion about one of his tattoos. The tattoo originally read “Winona forever,” in reference to Winona Ryder, Mr. Depp’s former partner, but he had it changed to read “Wino forever.”

Sasha Wass, a lawyer representing the newspaper, told the court in her closing argument that Mr. Depp’s violence had come about because of a dislike of Ms. Heard’s independence, as well as his alcohol and drug use. Ms. Wass said that Mr. Depp had used so many substances that “he may not even have been aware of the extent of his violence and terrifying behavior.”

During the trial, Mr. Depp’s team said that Ms. Heard was actually the abuser, provoking arguments and, in one case in an argument in Australia, throwing a vodka bottle at him, severing his fingertip. Ms. Heard testified that Mr. Depp had severed his own fingertip in the argument while smashing a phone next to her head.

Mr. Depp’s team also portrayed the accusations as a hoax that Ms. Heard had constructed as an insurance policy in case the marriage broke down. “She was, according to this scenario, nothing more than a gold-digger,” Justice Nicol wrote in his ruling. “I do not accept this characterization of Ms. Heard,” he added, pointing out she had claimed to have given all of her $7 million divorce settlement to charity.

“Her donation is hardly the act one would expect of a gold-digger,” the judge said.

Ms. Heard acknowledged having once hit Mr. Depp, but told the court that she had been trying to protect her sister, whom she thought the actor was about to push down some stairs. “I will never forget it, because it was the first time after all these years that I actually struck him back,” Ms. Heard said.

During the trial, Ms. Heard said that she could not understand Mr. Depp’s defense, or why anyone would accept it. “Johnny was twice my size and beat me up for five years,” she testified. “It seemed preposterous to me that he could or would ever think that his claims of victimhood were real or would work.”

After the ruling was issued on Monday, The Sun said in a statement, “Domestic abuse victims must never be silenced, and we thank the judge for his careful consideration and thank Amber Heard for her courage in giving evidence to the court.”

Mr. Depp’s lawyer did not immediately respond to a request for comment.

Jennifer Robinson, a lawyer for Ms. Heard, said the actress was “unable to comment on the case due to the ongoing U.S. proceedings.” But Elaine Charlson Bredehoft, Ms. Heard’s American lawyer, said in a statement that the judgment was “not a surprise.”

“We are committed to obtaining justice for Amber Heard in the U.S. Court and defending Ms. Heard’s right to free speech,” Ms. Bredehoft said.

Everything Dropping at Palace This Week
Entertainment