Javicia Leslie was all dressed up with nowhere to go.

Stuck under strict quarantine, she had spent a week without talking in person to anyone outside her Airbnb in Vancouver, British Columbia. She was there to finish shooting Season 2 of the CW series “Batwoman,” just back from a trip to Los Angeles to see her family for holidays. Now not even her hair and makeup people were allowed in.

Or drab. Leslie, 33, who will become the first Black actress to portray Batwoman onscreen when Season 2 of the series premieres Sunday, was lighting up the room she has called home since August, in a white off-the-shoulder top, quadruple-stacked earrings and a fierce shade of eye-popping pink lipstick.

“I’ll be here until May,” she said. “But I got to see my family for two weeks, so now I feel like I can finish the last five months strong.”

As she waits to resume shooting the final half of the new season of “Batwoman,” she has been getting through the dreary winter days by watching the FX drama “Pose” and by looking forward to spring, when her garden there blooms with tulips and huge sunflowers that are “like, eight feet tall.”

In that regard, she’s not so much unlike her newly created character, Ryan Wilder, a young homeless woman who lives in a van with her plant before she begins flitting among Gotham City’s rooftops as Batwoman. Ryan steps into the boots of the previous Batwoman, the wealthy businesswoman and Bruce Wayne cousin Kate Kane (Ruby Rose), but as Leslie noted, her Batwoman is hardly a carbon copy.

Though, like Kate, Ryan is athletic and an out-and-proud lesbian, she is also messier, goofier, wilder. And whereas Kate grew up with two supportive parents and was at the top of her class at an elite military academy, Ryan grew up alone on streets crawling with criminals. “I know how they think,” she says in the new season. (Kate has not been killed off — her disappearance is central to the new season — but Rose abandoned the lead role last year, citing a difficult recovery from an accident on set.)

Leslie previously starred as Ali Finer, an atheist whose life is turned upside down by a Facebook friend request from “God” on the CBS series “God Friended Me,” and as a spoiled party girl on the BET+ crime drama “The Family Business.” But this is her first lead role in a major series.

In an interview Monday, she discussed the trickle-down effect of being cast as a Black female superhero, what it was like to grow up loving both Barbie and superheroes and the thrill of doing many of her own stunts. (She is a martial artist.) These are edited excerpts from the conversation.

Your character, Ryan Wilder, was newly created for this series. How does she stack up against Kate Kane?

They come from different worlds. Ryan has a bit of comedic energy because she’s very flawed. I always think of her as someone who smashes a bowl in a china shop, like: “Oops, my bad. I didn’t mean to do that, but I’ve done it.” She’s not as smooth as most superheroes are. It wasn’t a situation where I had to try to make her different from Kate — she just is.

Did you know before you were cast that you would be the first Black actress to play Batwoman if you got the part?

It crossed my mind a few times during the audition, but it really landed after I got the part. When I saw myself on a billboard as Batwoman for the first time two weeks ago, I just had to take a minute to live in the moment.

Who was the first person you told after you were cast?

My mom, of course. She was super excited, like, “I’m going to be Batmom!” It’s strange to say now that I’m Batwoman, but she was my Superwoman growing up. She raised my brother and me by herself while serving in the army, so I saw her badass-ness daily.

Who were some of your other heroes growing up?

As a person of color, I was a big fan of Storm from “X-Men,” and Catwoman was the coolest supervillain. Outside the world of comics, it was people who used their art as activism — people who fought for their right to exist in the entertainment industry like Diahann Carroll, Dorothy Dandridge and Nina Simone.

What was on the walls of your childhood bedroom?

Barbie everything. I simultaneously loved the superheroes I saw on TV, and Barbie, who was right in front of me and allowed me to create my own personalities and worlds. I loved my Black Barbies and Barbie Dream House and Barbie Corvette. 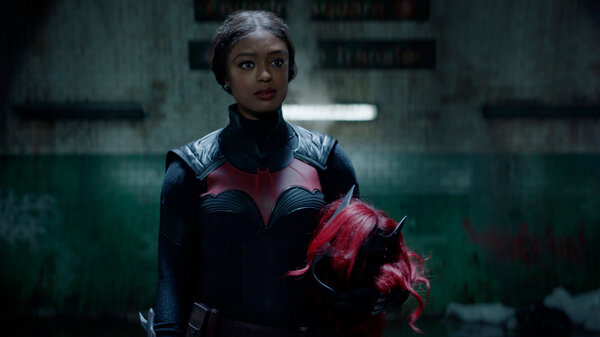 How did you feel the first time you put on the Batsuit?

I felt an immense responsibility because I represented a superhero. I had a huge bat sign across my chest. I was excited, but I felt its weight.

Does it frustrate you that it’s taken until 2021 to cast the first Black Batwoman?

The first Black Batwoman is the beginning of change, but it should’ve happened a long time ago. Our world is diverse as hell, and the leadership roles in entertainment need to reflect that.

Have you ever felt as if you lost out on a role because you were Black?

Not that I know of. But, of course, it’s never that easy that I can say, “You didn’t pick me because I’m Black.” When I first started, Black actors were not being looked at for lead roles in shows and movies unless there was a Black content creator. They were the only people hiring us.

What frustrates you most about the entertainment industry?

You can’t just hire one person and say you’ve done the representation. You have to make sure that one person is supported by a diverse writer’s room, diverse stunt doubles, diverse stand-ins — it’s a trickle-down effect.

How close do you think we are to true representation on television?

We are still far, far away. When I was hired as the first Black Batwoman, they also had to hire a Black female stunt double and a Black female stunt driver. Our stunt coordinator, Marshall [Virtue], worked so hard to find a Black female stunt driver, and it just showed how much underrepresentation there is in that industry. And you look at crews, and maybe 10 percent of them are people of color. Now that we have programs like Ava DuVernay’s initiative [Array Crew, which connects underrepresented crew members to hiring managers], which allows people creating content to find people of color, L.G.B.T.Q. people, and women on a database, there’s just no excuse anymore. If you want a Black female camera operator, now you can find someone.

You didn’t come out to your mother as bisexual until you got the role. Were you nervous?

My mom and I don’t talk about sex in general, so it wasn’t like I was hiding anything. I’ve never felt I had to hide who I was — I’m from Upper Marlboro, Md., which has a very inclusive queer community that is out and loud and proud. There’s never been a moment where I had to fear anything because of who I am. But when I got the role, I wanted to have that conversation with her because I didn’t want her to find out anything that she felt like she didn’t know about me from someone else.

How did she react?

She was just like, “You are my daughter, and I will love and support you no matter what.” It never felt like a coming out moment; it just felt like a conversation. I was already walking my truth; I was just filling my mom in.

You showcase some sick martial arts skills in the new season. Did you do all your own stunts?

Not all of them. But a lot of them, especially flying in and out of my scenes. I love being up, like, 50 feet in the air and getting to see all of Vancouver below me.

What encourages you about the entertainment industry?

I feel proud that, as an underrepresented person in the industry, I’m coming in with my elbows out and making way. We’re not allowing ourselves to be silenced anymore.